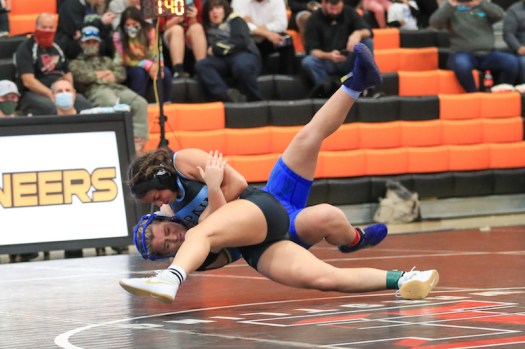 Spain Park's Yasmine Oliveira takes her opponent to the mat. She finished second in the first ever AHSAA Girls' Wrestling State Championship. (Photos for the Reporter/Dawn Harrison) 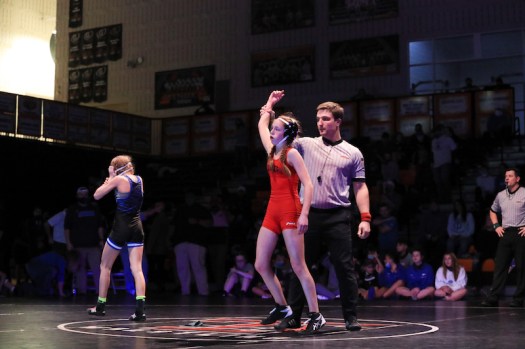 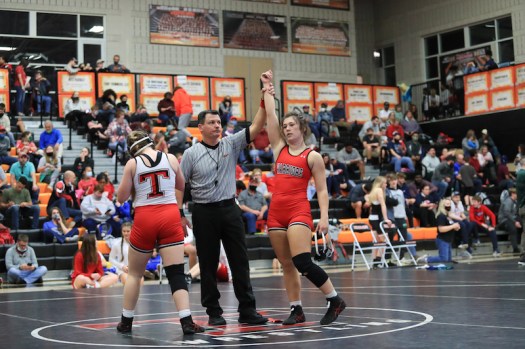 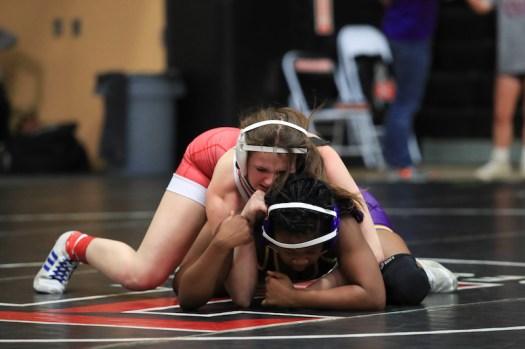 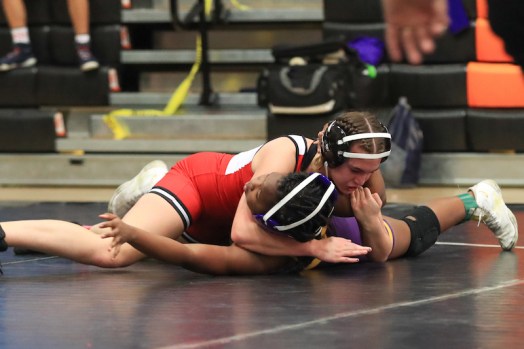 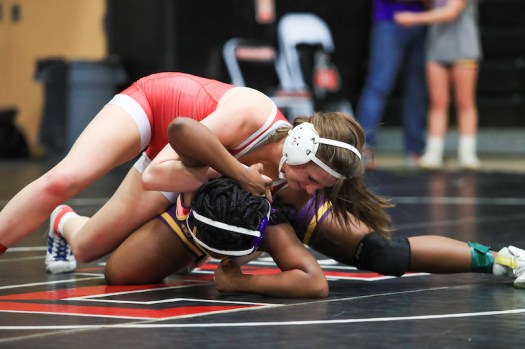 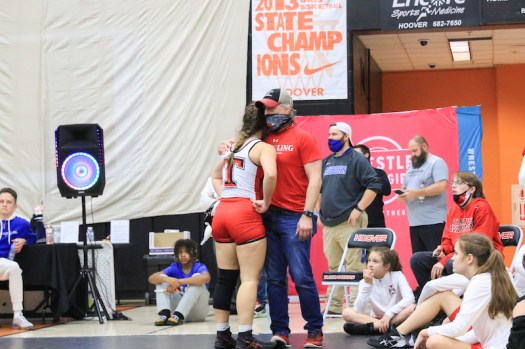 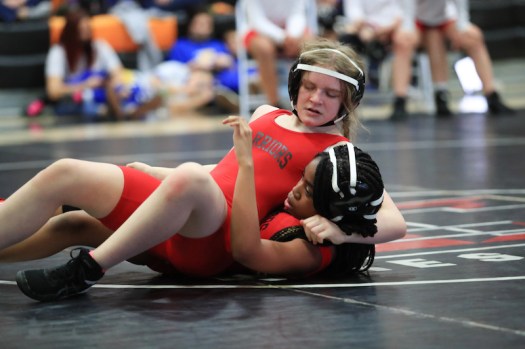 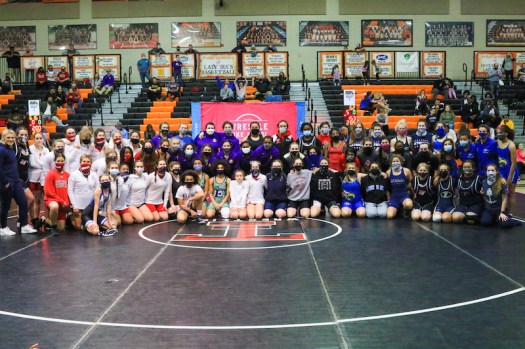 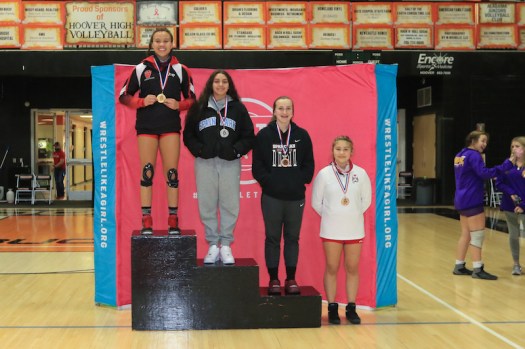 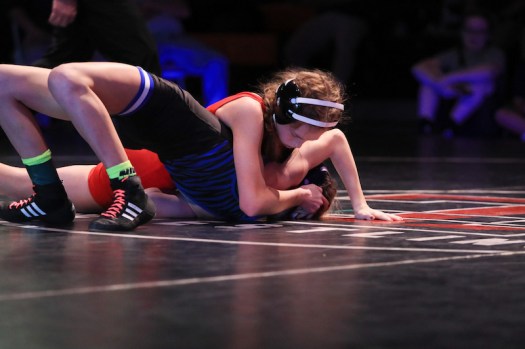 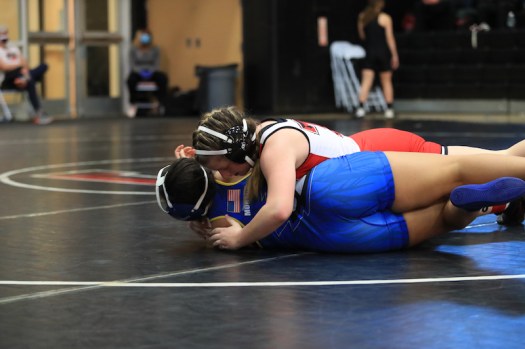 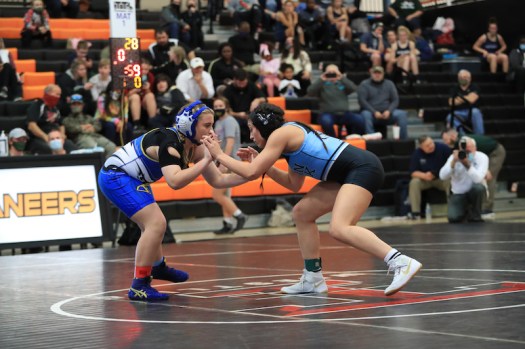 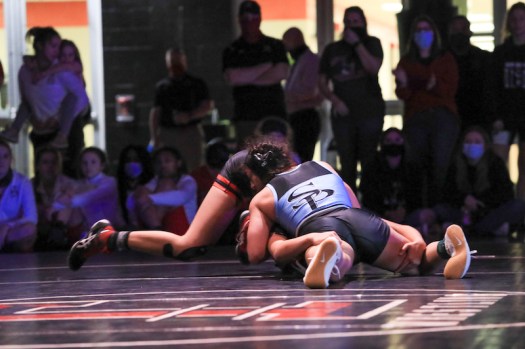 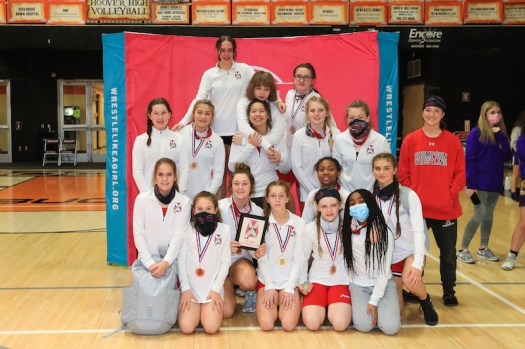 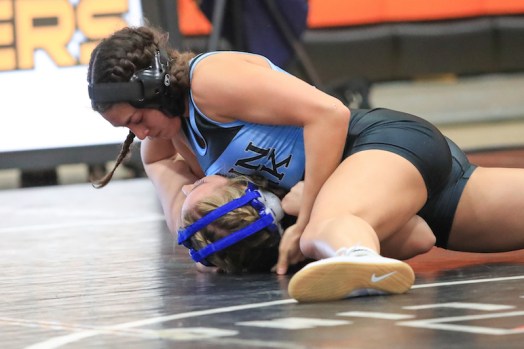 Looking on with a beam of joy in his eyes, you would have never imagined Shawn Weltzin had seen championship wrestling before.

That, however, is the furthest from the truth you can get. The Thompson head wrestling coach has won eight state championships with the Warriors, including five in a row from 2011-2015 as well as the last three in a row.

But inside Hoover High School on Saturday, Jan. 23, Weltzin saw championship wrestling he had never seen before as his daughter and 74 other female wrestlers from across the state made history in the state’s first AHSAA Girls’ State Championship.

“It finally set out an equal playing field for them and gave them a day of their own,” Weltzin said. “In no other sport do you have guys and girls competing against each other. The girls aren’t required to do what the guys do. So this gave them an equal opportunity to show their skills and what they’ve been working on all season long.”

Included in those 75 wrestlers were athletes from Thompson, Oak Mountain and Spain Park.

The Oak Mountain Eagles and Spain Park Jaguars both had one wrestler in attendance, and each finished inside the top three of their respective weight class.

Thompson brought 17 wrestlers to the event, and not only had eight finish inside the top four of their respective weight class but finished second as a team in the inaugural event.

“A lot of them had never even wrestled against other girls up until this year,” Weltzin said. “Our senior wrestled for us last year, Brynleigh Glover, and she only had one or two matches with a girl. She was just excited that she got to actually compete against other girls this season.”

It made the sport more competitive and enjoyable for the female wrestlers, who felt like they weren’t be given a fair opportunity to highlight their skills.

That is something that made Spain Park’s Yasmine Oliveira want to quit the sport at the high school level a year ago.

“I felt very challenged, which was a good thing at first, but wrestling with a bunch of guys messed with my head, and I wasn’t winning as much as I was used to,” she said. “It was mentally challenging, but it was also draining. Wrestling in middle school against guys was a completely different story, and I thought high school wrestling wasn’t going to be much of change. At first I was doing good, but I got tired of not doing as well as I thought I would.”

But Oliveira said that if she got the opportunity to get back on the mat with girls, she’d do it in a heartbeat.

She got that chance this season, and it ended with her finishing second in the 140-pound weight class for the Jaguars.

She won her quarterfinal and semifinal matches with pins to earn a spot in the championship match where she went on to fall to Weaver’s Lena Johnson.

But as Spain Park’s first female wrestler, she knows what she did this year has paved the way for more to follow in her footsteps, which meant more than the impressive performance.

That’s also a welcome burden for Oak Mountain’s Kathryn Alvis, who was the first female wrestler for the Eagles in school history.

Alvis had a spectacular season and capped it off by finishing third in the 130-pound weight class. After dropping her opening match of the tournament, Alvis responded by winning four in a row, all via pins, to claim the top-three finish.

For the Thompson Warriors, however, there was a lot on the line with them, along with Wrestle Like A Girl nonprofit, being a big backing force in the tournament even happening.

“When I brought this event up to the AHSAA four or five years ago during a meeting, they kind of laughed at me,” Weltzin recalled. “I was like ‘No, seriously, it’s heading that way.’ We were basically pushing girls away from our sport instead of encouraging them.”

But they were encouraged on Saturday, and the Warriors made sure they proved they had been looking forward to this opportunity for a while with their performances on the mat.

Brynleigh Glover, who was the team’s lone senior and known as mother hen, was one of three to finish in fourth place for the Warriors, alongside both Zoey Bair and Estrella Islas.

Beyond that, Katey Quebodeaux and Bailey Weismann both finished third after each bounced back from early losses with late wins.

Rachel Crowe was the team’s only wrestler to finish in second place. She won her first two matches thanks to pins and then fell via pin in the championship match after a remarkable run.

Lynleigh Weltzin and Aenaya Vines both finished the event unbeaten to claim the titles in their respective weight classes.

Weltzin won both of her matches via pin to claim the championship in the 95-pound weight class, which is something that fits right in with her family.

“It was a special moment for me that I’ll never forget,” Shawn Weltzin said. “I had my son next to me coaching and got to watch my daughter win a state championship. The Thompson wrestling program has always been a part of our family so it was a special experience.”

Vines finished 3-0 in the event to claim her title thanks to three consecutive pins in a dominant tournament.

“It was a new experience to be able to wrestle more girls this year,” Vines said. “Coming into this tournament, I was obviously looking forward to winning, but I was excited to be a part of something so new. It was fun to wrestle in a new all girls tournament. It feels amazing to be a part of history in Alabama.”

And while the female side of the sport still isn’t officially sanctioned individually by the AHSAA, this set it on the right path to happen when it comes back to the table for discussion during the next reclassification cycle.

“I think this was an eye opener for the state. We had 26 different schools represent,” Weltzin said. “Those people will go back to their schools and find friends that want to compete, and next year it will be triple the number of participants.”