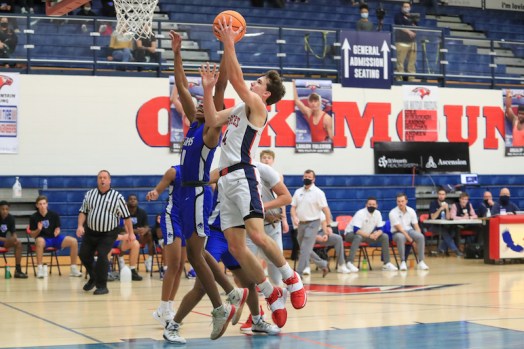 Wilder Evers, above, led Oak Mountain with 16 points in an overtime win against Tuscaloosa County on Jan. 26. (For the Reporter/Dawn Harrison) 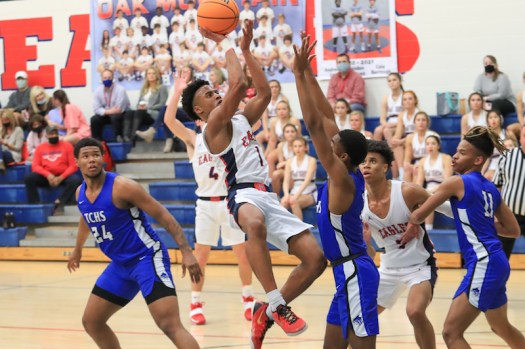 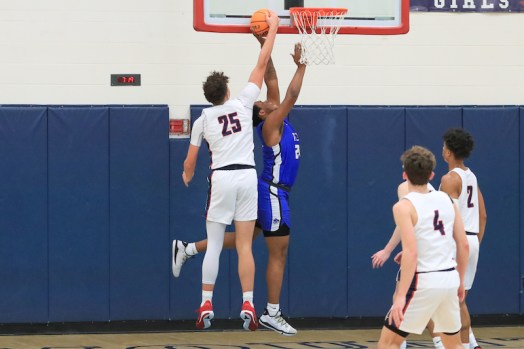 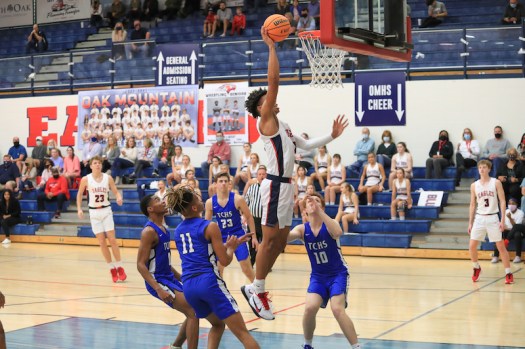 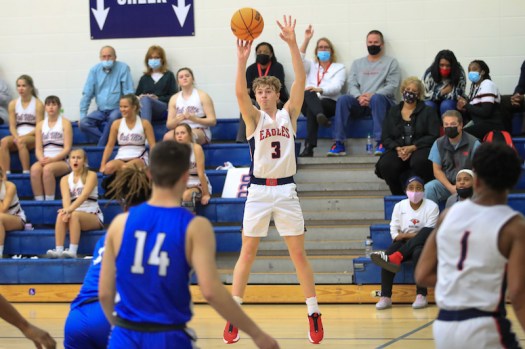 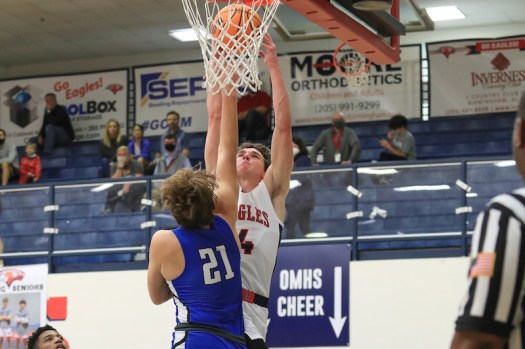 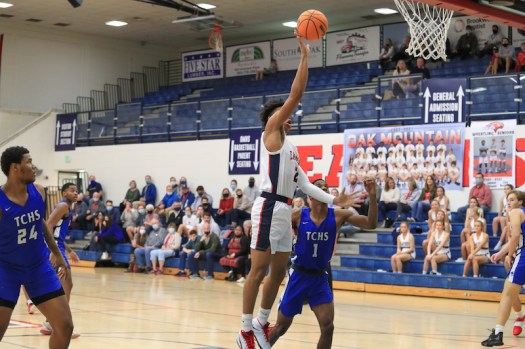 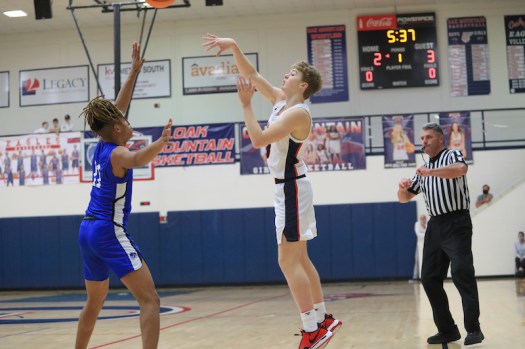 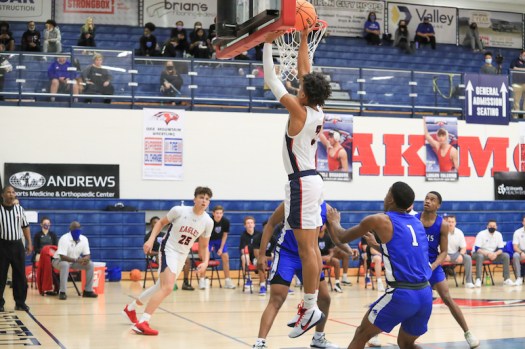 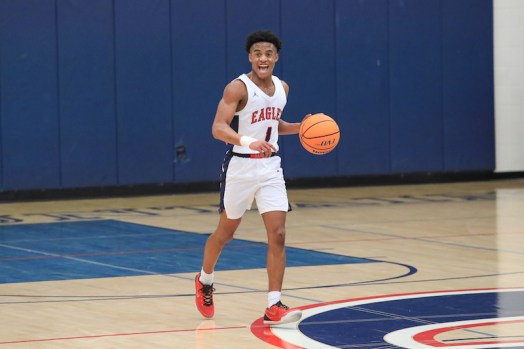 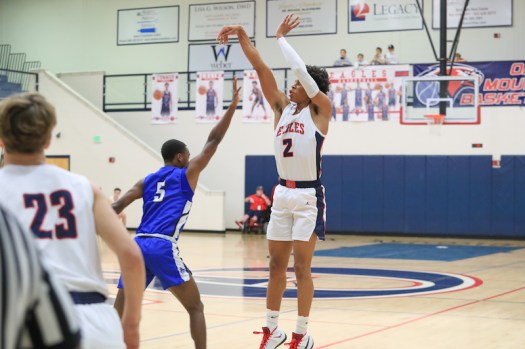 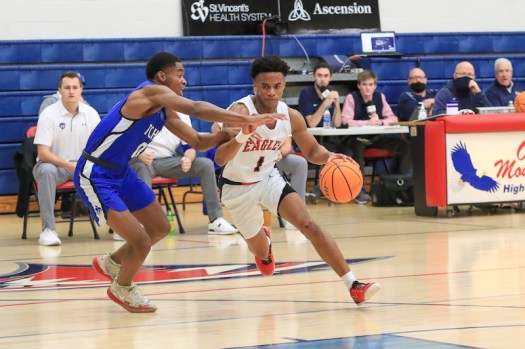 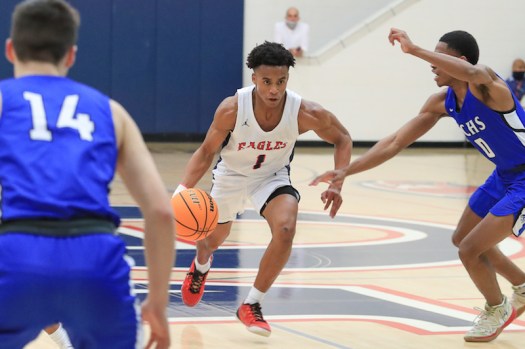 NORTH SHELBY – It’s safe to say the Oak Mountain boys basketball team has found its rhythm with the lineup now back to 100 percent, and that’s been no more evident than the last three games.

Taking down top 10 teams Thompson and Hoover in back-to-back games, the Eagles went into their matchup with Tuscaloosa County on Tuesday, Jan. 26, looking to remain in a tie for first place.

It took more than four quarters to do, but Oak Mountain picked up the win in overtime behind a strong finish to the game.

In a 43-43 game to start the extra period, Wilder Evers and Evan Smith combined for three field goals to help the Eagles get off to a strong start.

From there, Oak Mountain made five of eight free throws down the stretch of overtime to score 11 points. That, combined with an impressive defensive effort carrying over from the fourth quarter, helped the Eagles pull away and claim a 54-48 win.

That kept the Eagles in a tie for first with Hoover going into the final night of area play on Friday, Jan. 29.

Throughout the contest, the game was a battle with Bryson Hall and Will Shaver attacking in the post and both teams finding defensive rhythms at different portions of the game.

Early on, Oak mountain came ready to roll on both ends of the floor. Offensively, the Eagles were led by Evers in the first two quarters.

He posted six in each quarter for 12 first-half points.

In the opening quarter, he posted half of his team’s points with Smith, Noah Young and Shaver all hitting one field goal.

But in the second quarter, they also got a lift from Brady Dunn thank to the sharpshooter knocking down two 3-pointers.

That helped the Eagles score 16 points in the period, which was their most of any frame in the game.

On the other end of the floor, the defense started strong as well, limiting a good Tuscaloosa County offense to 11 points in both quarters.

Hall, who is one of the state’s best players this season, got off to a slow start in the first quarter with three points, but you could see him warming up going into the half with a seven-point second quarter.

In the second half, however, the Eagles never did find the same success on the offensive end, which put more pressure on the defense.

After a quiet first half of two points, Shaver came out and scored seven of his 11 points in the third quarter with Evers adding one field goal for nine points as a team.

But on the other end, Hall was officially in attack mode. He came out and took advantage of a defense that was feeling pressure and scored nine points in the quarter to help the Wildcats total 14 and get within one point of the Eagles going to the final quarter.

In the fourth period, both teams were determined to up their defensive presence, knowing that would give them a chance in the final minute at a win.

That led to a low-scoring quarter of basketball, but worked in the favor of Tuscaloosa County.

The Wildcats got a huge 3-pointer from Javante Smith and two free throws from Cedric Williams, while Hall added one more field goal.

It only equaled seven points, but Oak Mountain’s struggles continued on the offensive end, scoring just six points in the quarter. The Eagles made four of five free throws in the quarter, but that one miss allowed the Wildcats to tie the game at 43-43.

But, in overtime a switch seemed to flip for Oak Mountain.

The offense, which had produced little in the second half, came out and scored 11 points to almost total their entire production from the third and fourth quarters.

That, along with the continued defensive pressure, led to an important 54-48 win.

Hall led the Wildcats with a game-high 23 points.