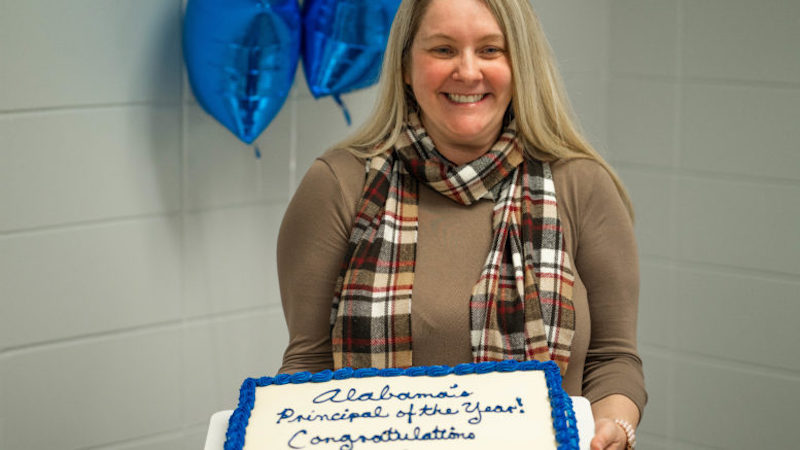 By CINDY WARNER / Special to the Reporter

Obert was surprised at her school with the announcement on Monday, Jan. 25 by Vic Wilson, executive director of CLAS; Dr. Lewis Brooks, Shelby County Schools superintendent; and Dan Chappell with Interior Elements.

Obert had previously been named the District 5 Principal of the Year and was one of three nominees for the state award.

“I am pleased that Caroline Obert is being recognized as the Middle School Principal of the Year,” Brooks said. “Her love of her students and staff, along with her leadership and poise under pressure, have been instrumental to her success. She leads with intention and a forward thinking approach. As such, I am extremely proud that this honor is being bestowed upon her.”

The business sponsor of the award is Horace Mann.

Obert has served as principal of Chelsea Middle School since June 2017.

Prior to being principal at Chelsea Middle, she served as an assistant principal at Oak Mountain Middle School and Hueytown High School.

“Being named the AAMSP State Principal of the Year has been the most humbling surprise of my career,” Obert said after learning of the honor. “The colleagues I have had the honor of working with over the years are amazing, to say the least. This award makes me reflect and reminisce about all of the dedication, hard work, selflessness, love and willingness to do whatever is necessary by all of the amazing educators in our state.”

Obert said the greatest accomplishments as a principal are being able to develop leaders and helping others to succeed.

“CLAS has been an integral part in fostering these accomplishments along with Shelby County Schools,” she said. “Thank you to all of my current and former students, teachers and colleagues over the years. You are what makes this award special in so many ways.”

In addition to being eligible to apply for the National Middle School Principal of the Year award, Obert will also have her administrative office remodeled courtesy of Interior Elements as part of the state recognition.