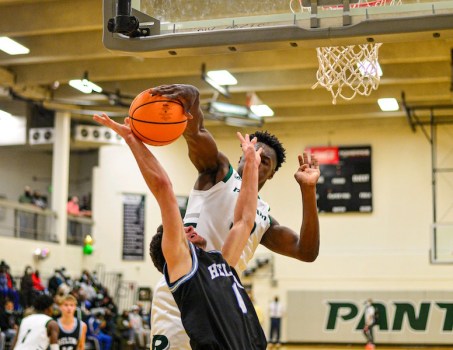 Pelham’s Kendan Maddox blocks the opponents shot during a 59-50 area win against rival Helena on Tuesday, Jan. 26. (For the Reporter/Jeremy Raines) 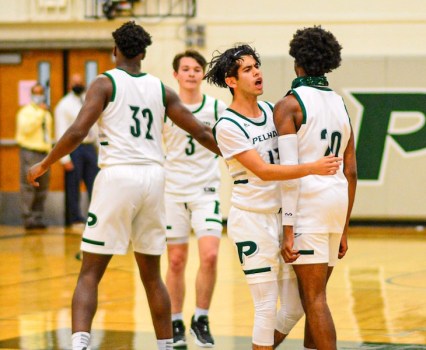 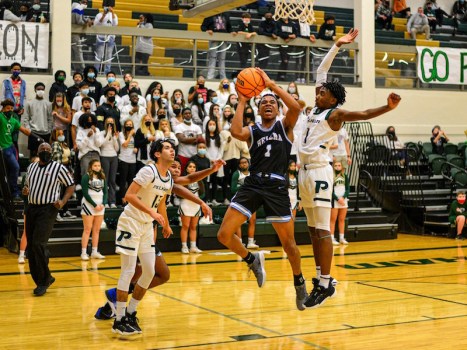 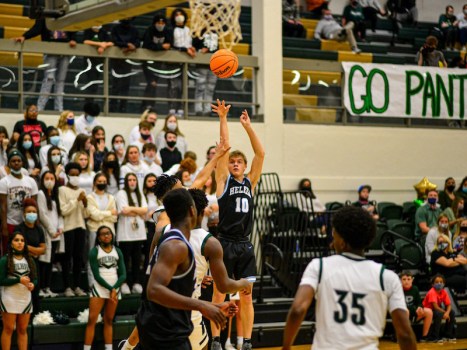 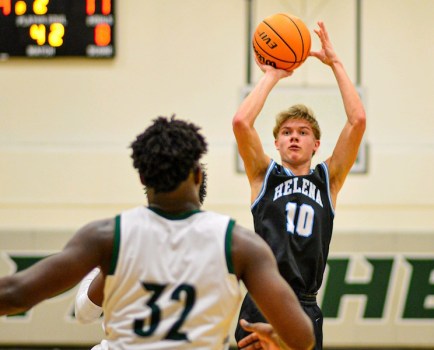 PELHAM – Kamari Hollis and Jordan Holloway did their part in the fourth quarter to help the Pelham Panthers complete a season sweep of rival Helena on Tuesday, Jan. 26, in front of their home crowd.

Entering the final quarter knotted at 40 apiece with the Huskies, Hollis and Holloway, who had six or less for the entire game, both put together six-point quarters in the final frame to help the Panthers total 19 points as a team.

That didn’t just break the tie, it helped the Panthers outscore Helena 19-10 in the period for a 59-50 win.

Those finishes helped Hollis total 13 points in the win, while Holloway added 11 points.

It was an exciting finish to a thrilling rivalry contest between the two teams, as the Huskies entered looking for redemption from a loss on their home floor two weeks earlier.

Helena got off to an ideal start on the offensive end of the floor and grabbed the early advantage thanks to Josh Williams scoring eight points behind two 3-pointers. Charlie Marshall also added a deep ball, while Owen Davis and Jacob Satterfield added two apiece.

The Panthers kept pace with the Huskies for the most part, making all four of their free throws and getting six points from Kendan Maddox, but they didn’t knock down a 3-pointer in the opening quarter.

That became a trend throughout, as Pelham never made a three during the game. That made a difference in the opening quarter, as the Huskies took advantage of the three they made to jump out to a 15-12 advantage.

Helena, however, lost its touch from the field in the second quarter. The Huskies only scored eight points in the quarter behind three field goals and two free throws.

Pelham didn’t have much more success offensively in the quarter, but the Panthers did score 11 points, which is exactly what they needed to tie the game going into the halftime break.

Despite scoring 12 or less in the first two quarters, that late run to tie the game at the half and a halftime fueled by adjustments, Pelham came out in the third quarter with a fresh look offensively.

The Panthers used that to total 17 points in the third quarter behind seven different players scoring in the period.

But Helena matched Pelham blow-for-blow in the quarter.

The Huskies got six points from Joel Logan, while Marshall added seven points thanks to making five of his six free throws in the period. As a whole, Helena made seven of eight from the line in the third quarter, which played a role in the Huskies matching Pelham’s 17 points to send the game to the final quarter tied 40-40.

Pelham, however, was the only team that carried that offensive momentum into the final quarter.

The Panthers went on to total 19 points in the fourth quarter with Hollis posting seven and Holloway six.

Williams did his best to match the effort, but his seven points in the quarter weren’t enough.

Pelham was led by Maddox with 14 points, while Hollis added 13 and Holloway 11. The Panthers had 10 players score in the game.

Helena was led by Williams with 19 points, while Marshall added 12 and Davis nine.