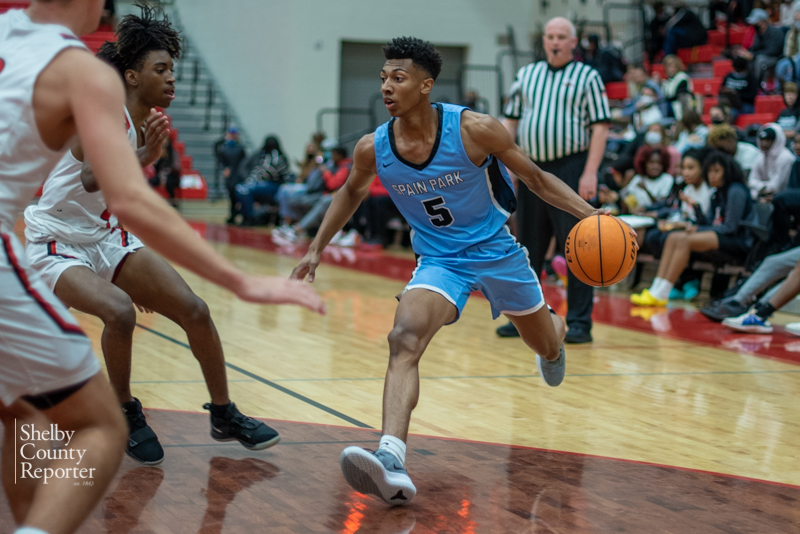 TRUSSVILLE – The Spain Park Jaguars held off a hard-charging Hewitt-Trussville team on Tuesday, Jan. 26, to grab their 21st win of the season and improve to 4-1 in area play.

Hewitt continued that run with a 3-pointer shortly after to make it a 20-8 run, which trimmed the deficit all the way down to six points at 61-55.

The Huskies got as close as five points at 62-57 shortly after, but they eventually ran out of time, as Spain Park’s early play to build a dominant lead was too much for them to overcome in a 63-57 loss.

For Jaguars, slow finishes have been their weakest point in recent week, losing to Vestavia Hills by one point in a game they led throughout and losing to Lee Huntsville by 17 points after leading the game at the half.

That shows room for improvement, but with the starts they’ve had and the season they’ve put together, there has been much more positive than negative.

That continued to be the case on Tuesday night, as Spain Park improved to 21-4 overall this season with the win and 4-1 in area play, still giving them a chance at hosting the area tournament.

A big reason for their success has been fast starts, which continued to be the case against Hewitt-Trussville.

Spain Park sprinted out of the gate to a with an 11-4 run in the first few minutes, and after the Huskies cut the deficit to five points at 13-8, the Jaguars ended the quarter on a 7-2 run to take a 20-10 lead at the end of the first quarter.

The Jags knocked down four 3-pointers in the quarter to play a key role in the 10-point advantage.

Spain Park carried their run into the second quarter with a quick 5-0 run to take a 25-10 lead, but the Huskies made back-to-back baskets to draw within 10 points.

But in the opening half, anytime the Huskies would seem to start a run, the Jags had an answer.

That led to the two teams trading 5-0 runs to make it a 10-point game again.

Then, the Huskies knocked down back-to-back 3-pointers at the opportune time late in the quarter to cut the deficit to five points going into the break.

But that stretch seemed to spark a new energy from the Jags to start the second half. After playing a strong first half, they didn’t feel like the score reflected the effort after the late run from the Huskies.

After some back-and-forth stretches early in the third quarter, Spain Park led by six points at 36-30 in a tight contest.

The Jags were led by Cam Crawford in the win with 27 points, while Blake Floyd made four 3-pointers for 12 points. Behind those two, Colin Turner and Josh Harrington added nine each.