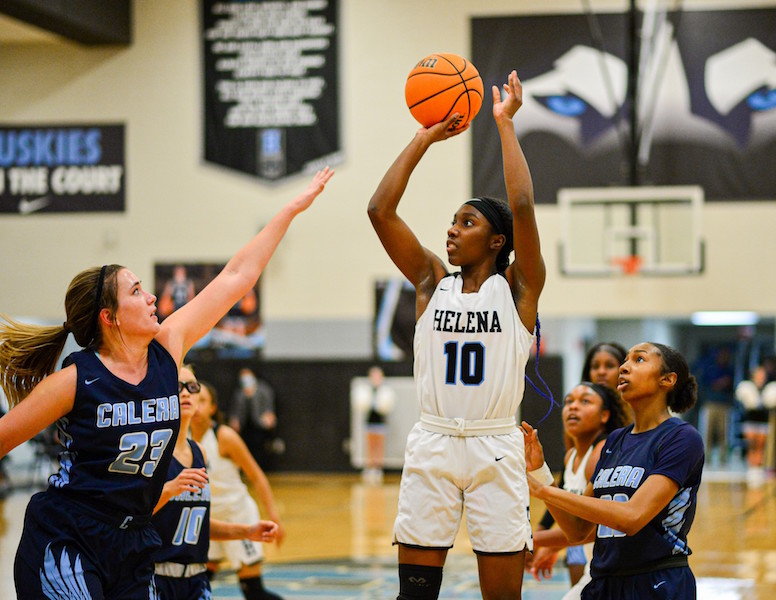 HELENA – Thanks to an impressive first half defensively and a 19-point fourth quarter offensively, the Helena girls basketball team finish area play in the regular season with a 49-37 win against Chilton County.

Montana Harris was a big reason for that success thanks to 19 points to lead all scorers in the win. Her start on the offensive end was also key, as was Kennedi Nobles, who finished with 11 points.

In the opening quarter, those two combined for all nine of Helena’s points, which was important with the way the defense started. Giving up just four points on the defensive end of the floor, those two helped the Huskies grab an early five-point lead.

That was part of a dominant effort on defense from Helena to start the game, as the Huskies came out and gave up five in the second quarter and nine for the first half.

Combined with the effort of Harris, who scored eight of Helena’s 11 points in the second quarter to help her team take a 20-9 lead into the halftime break.

Chilton County found a way to make important adjustments at the half, which allowed the Tigers to make it a game in the third quarter.

They got nine points from Iasia Anderson in the quarter and posted 16 as a team, while Helena was held to 10, which brought the Tigers back within five points at 30-25 going to the final quarter.

But that seemed to fuel Helena’s effort in the final quarter.

The Huskies came out and posted 19 points in the fourth quarter, while the defense limited Chilton County to 12 points to close out the 12-point victory.

Behind Helena’s two leading scorers, Kya Gardner added eight points in the win. The Huskies finished area play 3-3 and will now get set for the area tournament, looking to advance to the postseason.