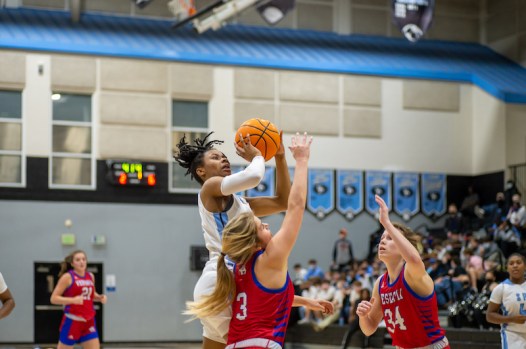 Haley Russell, above, played hero for the Spain Park Jaguars on Friday, Jan. 29, by sinking two free throws with 0.4 seconds left in a 44-43 win over No. 2 Vestavia. (For the Reporter/Larry Dancy) 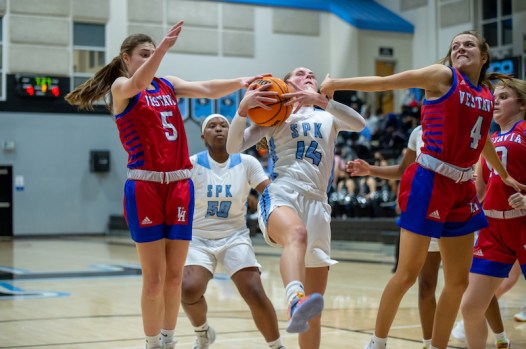 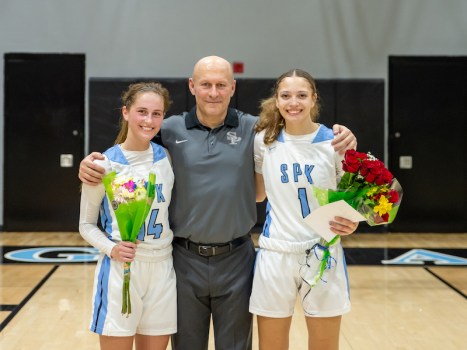 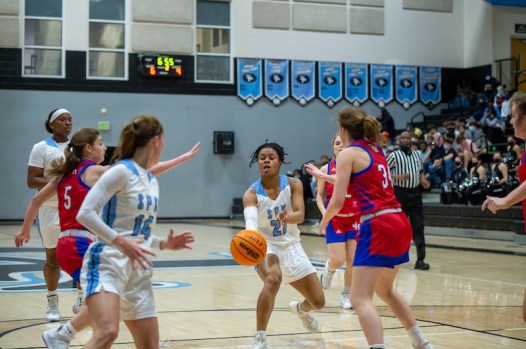 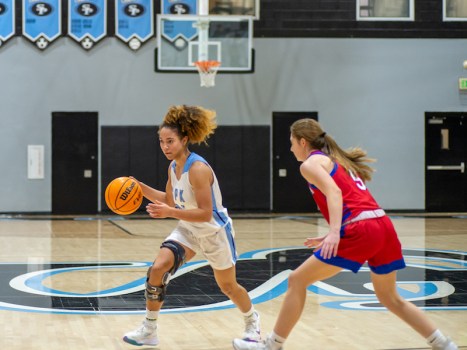 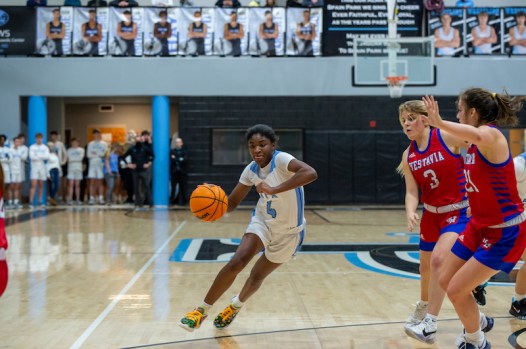 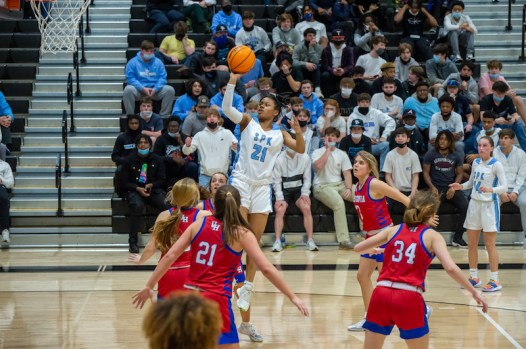 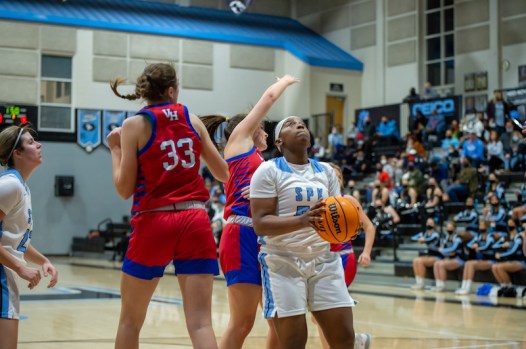 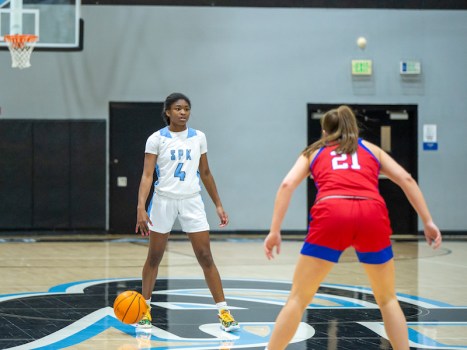 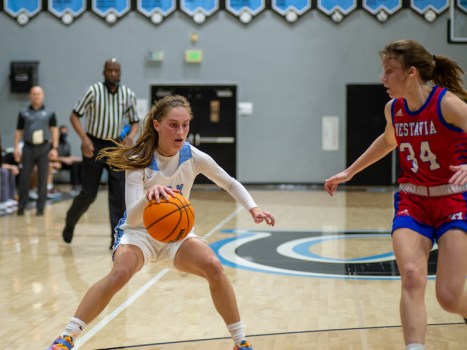 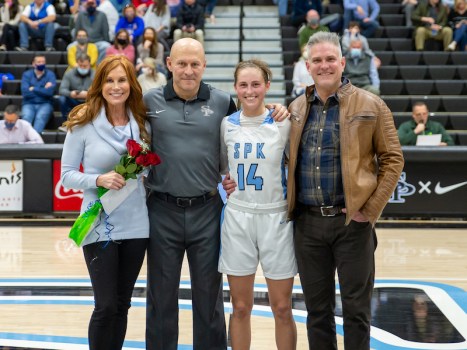 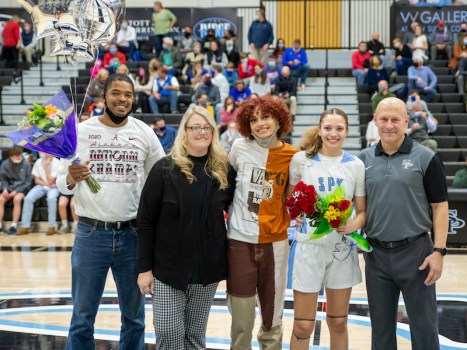 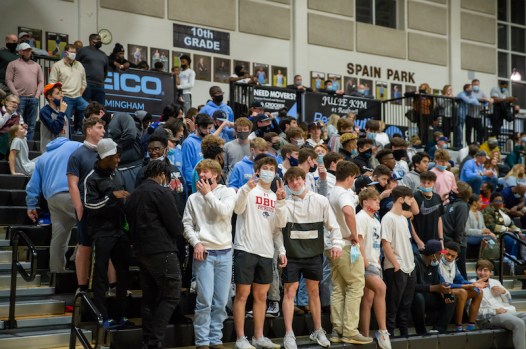 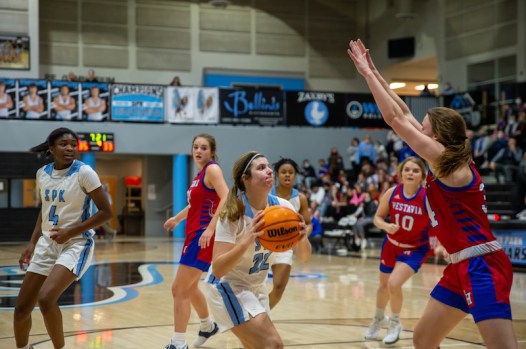 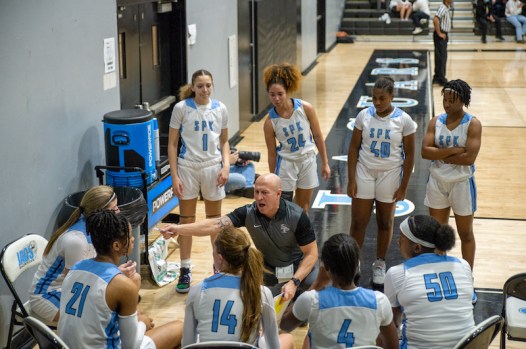 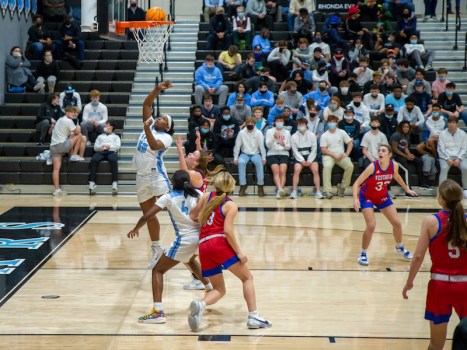 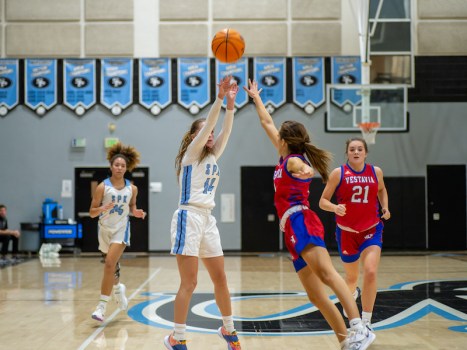 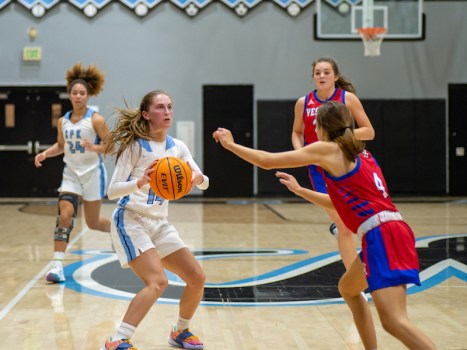 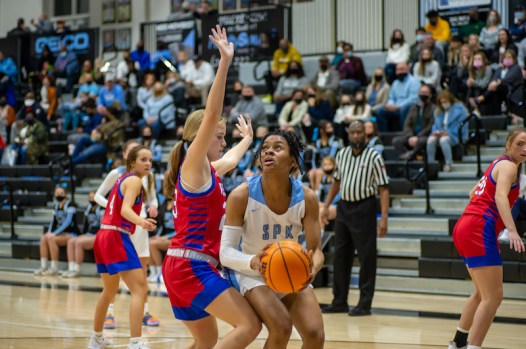 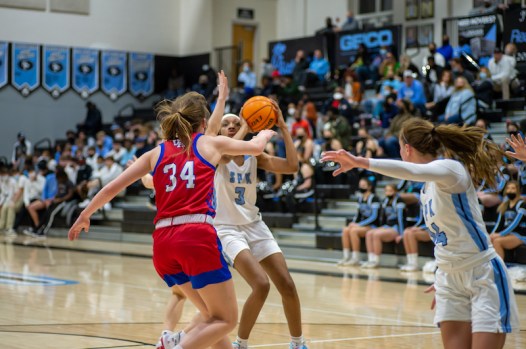 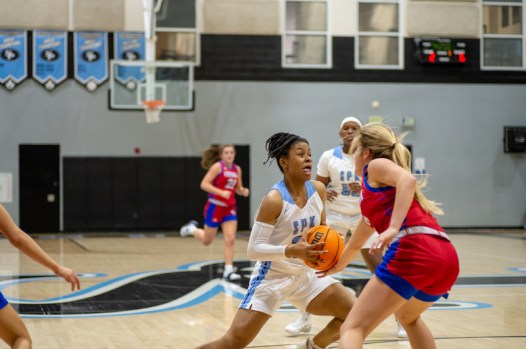 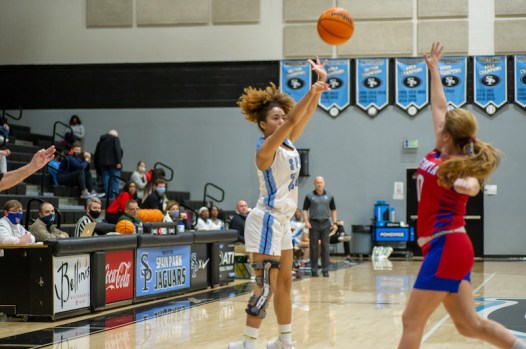 HOOVER – Standing at the free throw line with her team trailing 43-42 and 0.4 seconds remaining on the clock, there was more than just the game on the line for Haley Russell and the Spain Park Jaguars.

Throughout the season, the Jags have been searching for their identity after last year’s state championship season and the loss of star Sarah Ashlee Barker to the University of Georgia.

The problem is, they have been searching for that identity in an area featuring three of the top five teams in the state, including the Jags at No. 5.

But going into their Friday, Jan. 29 matchup with No. 2 Vestavia Hills, the Jaguars hadn’t proved they could compete for a state championship, losing to No. 1 Hoover by 15, losing to No. 3 Hewitt-Trussville twice and losing to Vestavia in their first matchup on Jan. 15.

With Russell at the free throw line, she had the chance to start a new season—one with hope of another state championship run.

And Russell didn’t flinch. Almost with confidence, knowing what that moment could do for the team in their area finale, she sank both free throws to give Spain Park a 44-43 win and a sense of belief ahead of postseason play.

Moving forward, it won’t be easy, as the Jaguars will have to find a way to beat No. 3 Hewitt-Trussville on the road in the first round of the area tournament after losing to them twice in the regular season. But there is at least a renewed sense of belief they can do that and punch a ticket to the Sweet 16.

Despite losing to the three top three teams in the state, the focus now shifts to losing to all of them in close games and then improving enough to win when it matters.

When they lost to the Rebels 59-43 in the first matchup, the Jags looked far off from a Sweet 16 team, struggling on both ends of the floor in a loss that looked worse than 16 points.

But that became fuel.

One reason the Jags bounced back in the second matchup was the ability to not get down on themselves when they fell behind and continue a strong defensive presence.

In the opening quarter, the offense struggled to find a rhythm, which has been the case at times this year, but the defense did exactly what it needed to.

Spain Park held the Rebels to six points for much of the period. That was until Vestavia hit a 3-pointer at the buzzer to take a 9-4 lead at the end of the frame.

At that point, the Jags could have let the ending to the quarter ruin their confidence, but that didn’t happen this time around.

After going down by eight points, Spain Park battled thanks to the defensive effort finally paying off on the offensive end. The Jags stormed back to take a two-point lead before a back-and-forth stretch ensued, eventually leading to a 22-22 tie at the half with Spain Park outscoring Vestavia 18-13 in the quarter.

That gave the Jags the confidence they needed going into the halftime break. Not only was the defense playing well, but the offense had found its rhythm.

Spain Park came out and took advantage of the swing in momentum by opening up a six-point lead in the third quarter.

The Rebels reeled them back in slightly, but the Jags had done enough with their 13 points in the quarter to take a two-point lead into the final period.

In the final quarter, the two defenses showed up in a hard-fought battle.

Spain Park extended the lead to three points midway through the frame, but Vestavia battled back during the second half of the period with a 6-2 run to take a 43-42 lead with less than 10 seconds to play.

That put the Jags in the situation of trying to win it in the final seconds.

After their original shot with three seconds didn’t fall, Russell got the rebound and was fouled in the process of her put back, leading to the two free throws.

She stepped in and sank both, as the Jags didn’t let this one slip away and gained the confidence they needed going into the area tournament.

Spain Park was led by Katie Flannery with 12 points, while Avery Masdon finished just behind with 11.