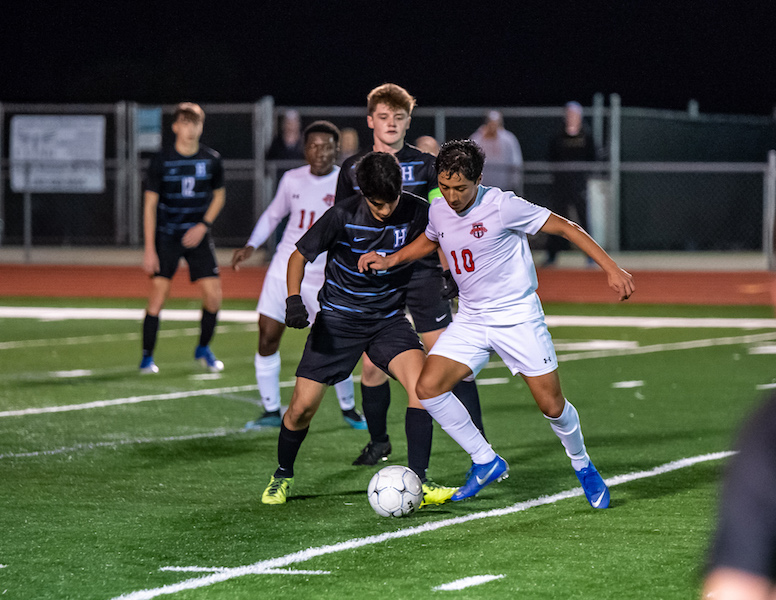 Thompson and Helena will both look to build off continued growth last year heading into the 2021 season. (File)

One aspect of the 2020 spring sports season that was normal was the number of local soccer teams set to battle for a state championship. That opportunity was cut short due to COVID-19, but now, as the 2021 season nears, that norm as returned.

The first Alabama Soccer Coaches Poll was recently released, and nine total teams from Shelby County were represented in their respective classification’s standings, while eight of those nine were in the top 10.

Of those ranked, only one gathered the top spot, as Indian Springs earned the No. 1 ranking in the 4A-5A standings.

Last year, the boys were off to an 8-1 start to the season with that lone loss coming 3-2 to a very good Briarwood team. Springs has lost four key players from the shortened season, but also returns some elite talent, including Jackson Nabors, who had 15 goals and 11 assists in those nine games last year.

He will be key, as will others, in helping the team chase down a state championship in 2021 as the preseason favorite.

The next highest ranked team came in the 1A-3A classification where the Westminster at Oak Mountain Knights came in at No. 2.

The Knights will be under first-year Cody Baxter, who took his previous team in Georgia to a No. 1 national ranking. Westminster will have just two seniors this year, but 10 juniors on the team ready to help make this year special.

Beyond those top two teams, all three Class 7A teams found a spot in the top 10.

Spain Park was the highest ranked of the three at No. 3, while Thompson came in at No. 5 and Oak Mountain No. 7.

All three have plenty to be excited about with the Jaguars returning a strong cast of athletes to a team that was 8-2-1 early last year before the season ended early.

The Jags will be a favorite, along with Vestavia Hills and Hoover, in a competitive 7A classification.

Just behind at No. 5 is Thompson, who will be fresh off one of their best starts in school history. The Warriors were 12-1-1 midway through last year with the only loss coming by a score of 1-0 to this year’s No. 1 team—the Hoover Buccaneers.

That seems to have given this year’s team the confidence to be even better after seeing the work it took to be great. The Warriors will compete in a difficult area with the Bucs and Oak Mountain, but they’ll hope to finish a run this year and prove they are one of the best teams in the state.

Oak Mountain is two spots lower at No. 7 in the standings and will battle for a playoffs spot this season with the Warriors and Bucs.

The Eagles were off to a 7-5-3 start last year with a difficult schedule. Through that, they won seven games and their five losses were all by two goals or less, showing they were in every game.

This year’s team is hungry to get back to the state championship success they saw between 2015 and 2017, winning three in a row.

In the 6A standings, Pelham, Briarwood, Chelsea and Helena also earned praise with the Panthers the highest ranked of the three.

Pelham earned the No. 3 spot in the standings and is coming off an 8-2-3 start to last season. The Panthers lost both matches by three or less, falling to Spain Park 3-0 and Briarwood 2-1.

Always a contender to win the 6A state championship, Pelham will be another to keep an eye on this season with several key players returning to the roster.

Briarwood was ranked three spots lower in sixth, as the Lions prepare to compete at the 6A level after reclassification.

Despite the jump up and a young roster, the Lions are still a team that is expected to make noise this season. They won four in a row before last year was canceled to finish with a record of 8-3.

Chelsea was one spot behind the Lions in the preseason standings at No. 7. The Hornets were slightly young last year, but have some experience back this year on a team that will have to tackle a difficult area featuring Mountain Brook and Briarwood.

Helena didn’t find a spot inside the top 10, but the Huskies were ranked 15th in the preseason standings and have plenty to be excited about.

With seven seniors on this year’s team, head coach Klark Sammis says the sky is the limit for this year’s team. Coming off a 5-3-2 record last year, the Huskies competed against talented teams and seem poised to be the best they have been at the 6A level.