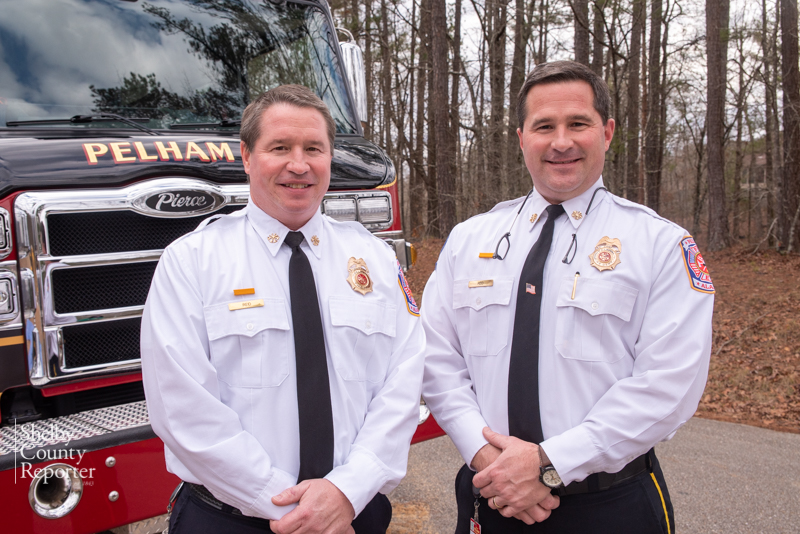 PELHAM — With more than 24 years of experience in fire service, Pelham Fire Department’s Danny Reid recently received a promotion from Battalion Chief to Deputy Chief of the department.

Reid comes from a family of firefighters, including his dad, who is retired Montevallo Fire Chief Bill Reid, two of his brothers, who serve for the Alabaster Fire Department, and his other brother, who happens to be Pelham Fire Chief Mike Reid.

Though Danny is the brother of his chief, he wasn’t given any special consideration or an unfair advantage, and to ensure fairness Chief Mike Reid removed himself from the promotion process to clear any doubts. However, he expressed how proud he was of his brother and is looking forward to working with him.

“I just sat back and watched the process play out,” Mike said. “We had a panel conduct the process and ultimately he was selected as the best candidate by them and officially recommended to me. At that point, I was able to name him Deputy Chief.”

The magnitude of this opportunity is something that is not lost on Danny, as he explained that this is a big job with a lot of challenges, but he is ready to face them.

“I have to say, this is the key landmark in my career,” he said. “I am very excited, and I am still trying to get my feet wet. It will be a learning curve. But you know what, I love a challenge and look forward to it.”

The brothers have spent the majority of their lives working in the fire service, which started for both of them as teenagers working with their father in Montevallo.

“Both of us got our start as explorers through the Montevallo Fire Department with our dad, who brought us in at 14 years old. So we have been around the fire service for 33 years,” Mike explained. “We have truly had a great role model in our dad, and coming through the ranks, we got to see that role model and that serving of the community through its volunteer department.”

Danny said working alongside his brother has been a great opportunity; however, when they walk into work, they leave family behind and focus only on how to best serve the community and the personnel that they command.

“My role was Battalion Chief, so Mike was my direct supervisor, which means we know we can work together,” Danny said. “Knowing that we are brothers when we are at work, we focus on putting family out of it. It is about the department and best serving our personnel and citizens. I foresee our relationship working very well going forward. I can definitely complement him in all aspects of the fire department.”

As Battalion Chief, it was Danny’s responsibility to command the C Shift of the Fire Department, which included 24 personnel across the five fire stations. As he moves into his new role, he will be responsible for the personnel across all shifts.

It is through support from and experience with his fellow firefighters that Danny feels he has been able to meet these challenges.

“Going into this, I know I had a lot of support in the fire department. I have been on shift for 24 years and that is changing now,” Danny explained. “With the shift I was on, being their supervisor, they supported me. What that does in turn is makes me want to do better.”

Serving citizens through the Pelham Fire Department is something that is quite literally in the blood of both Reid brothers, which they credit to mentors like their father Bill and others who they have worked with.

“All throughout our careers, we have had the great opportunity to work with the best in the business. So each time we get promoted, you learn that you have to be a good servant leader as well. You have more people to lead, but ultimately to serve,” Mike said. “It has been a great balance both ways to be mentored, as I was coming up. Now I am able to do that for all the people in my department.”