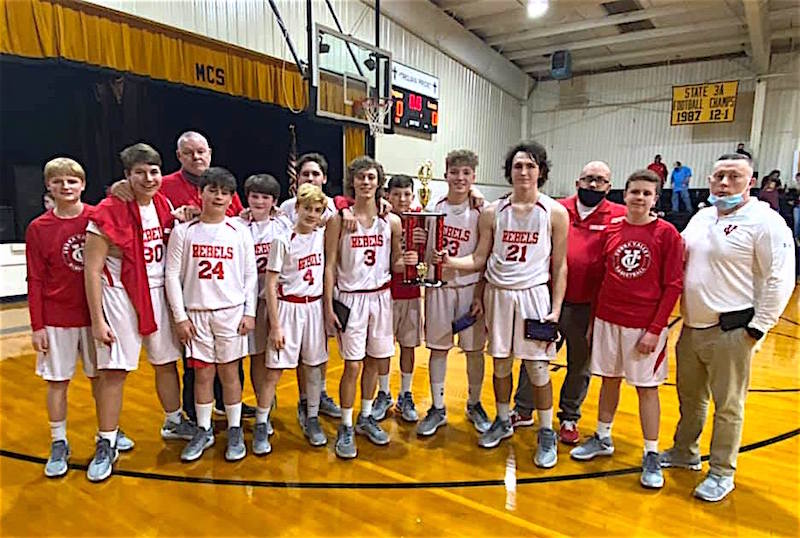 SELMA – After losing to Edgewood Academy in last year’s AISA State Championship game, the Coosa Valley Academy junior varsity basketball team was determined to redeem that heartbreaking loss this season, and not even COVID-19 could stop them.

The Rebels earned their way back to the state tournament on Saturday, Jan. 23, and this time, they wouldn’t be denied. Taking on Crenshaw Academy for the title, Coosa Valley got 18 points from Konnor Steele and played sound defensively to pick up a 38-32 win. 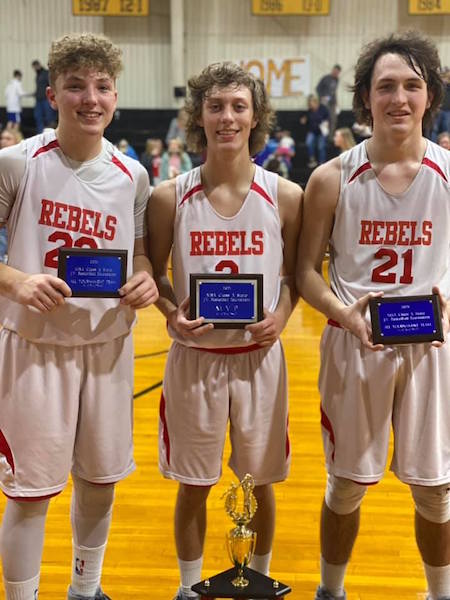 “Once we got there, there was no stopping them,” head coach RL Langston. “The mindset was ‘This is ours and we’re not going home empty handed this time.’ They played so hard.”

After a tight game through the opening quarter, Coosa Valley took a 10-7 advantage and turned it into a double-digit lead at the half.

The Rebels outscored Crenshaw 18-7 in the second quarter behind 12 points from Steele, four from Brycen Wilson and two from Jaxson Edwards.

That put them in front 28-14 at the break, after the defense held Crenshaw to seven points in each of the first two quarters.

But the win didn’t come without some adversity.

After a strong second quarter on the offensive end of the floor, Coosa Valley struggled to find success in the third quarter. The Rebels missed seven of eight free throws in the quarter and got just one field goal to post three points.

Crenshaw took advantage and clawed back into the game with a 13-point quarter, which trimmed Coosa Valley’s lead to 31-27 going to the final quarter.

But the Rebels were a team that wasn’t going to be denied this time around.

Knowing the defense just needed to get back to what it was able to do in the first half to win the game, Coosa Valley came out in the final quarter and closed the game out by giving up just five points.

That, combined with seven from the offense, was enough for the Rebels to shake off the nerves and claim this year’s championship.

“They got so close last year that they could taste it,” Langston said. “They worked so hard and didn’t want that same feeling this year, so that drove them and was the main factor in getting back and winning it this time.”

Steele was named the tournament MVP after scoring 20 points in the championship game. Wilson and Josh Allen were named to the All-Tournament team after posting seven and five, respectively. Edwards finished the game with six points.

It was a welcome sight to the team, who made this their goal as soon as the previous season ended the way it did.

Being so close last year, we started work this year with the number one goal to win a state championship,” Langston said. “They played hard, and the work ethic this year was outstanding. They showed up every day and did what we asked them to do.”

Despite COVID-19 being at the forefront of the season, the Rebels only missed two weeks the entire season and never lost sight of their goals even with the distraction staring them in the face.

“We’re a family. We’re very close. We do a lot of things together, not to over protect them, but to keep them from being out roaming around,” Langston said. “Being a smaller school, I think that helped us a great deal. We have 160 students, so we didn’t have to do with it as much as other schools.”

The distractions were also easy to overcome because of the goal they had in place.

“They wanted it this year, so there wasn’t much trouble to getting them to follow what we asked them to do,” Langston said.

As for the future of the program, Langston said the varsity and junior varsity teams are both very young, so he sees this as a program-changing win that will help the basketball teams for many years to come.