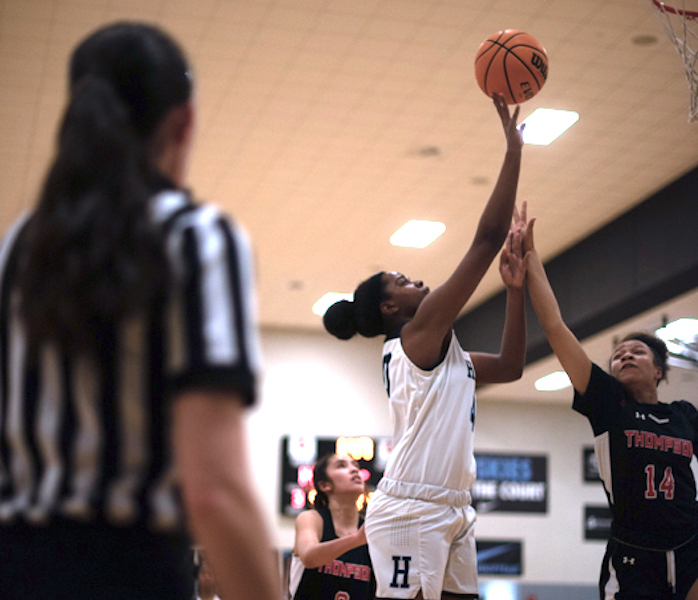 Helena picked up a 10-point rivalry win against Thompson on Feb. 2 behind a strong finish to the game. (Reporter photo/Keith McCoy)

HELENA – Thanks to an impressive defensive effort against the 7A Thompson Warriors, Helena’s girls basketball team didn’t just pick up a rivalry win on Tuesday, Feb. 2, but won their second consecutive game as they look to build confidence ahead of the area tournament.

Helena held Thompson to 10 or less in the first three quarters of the game, while the Huskies scored 10 or more in every quarter of the game on the other end of the floor, leading to a 48-38 victory.

Early success was also a key for the Huskies, who jumped out to an eight-point lead behind a 10-2 run in the opening quarter thanks in large part to four points from Montana Harris. That put them in the position of playing with the lead throughout the night.

The Warriors answered with a 5-0 run to end the period, which limited the damage, as the went into the second quarter trailing by three points.

Helena’s defense continued to play well in the second quarter, giving up just eight more points, but the start to the period was more back and forth.

Thompson went on an 8-6 run to trim the deficit to one point during the period, but Helena responded with a 5-0 run to end the quarter thanks to Harris and Brianna Wilson. Wilson scored four in the quarter, while Harris knocked down a 3-pointer and posted seven more points.

That stretch near the end of the frame helped the Huskies take a 21-15 lead into the halftime break.

Despite the closeness of the game, Thompson never could overcome the deficit.

A big reason was the start Helena had to the third quarter.

The Huskies outscored the Warriors 5-2 in the early portion of the quarter, which put Thompson in a nine-point hole.

The Warriors did get a spirited effort from Malaysia Samuel in the period thanks to eight points, which helped them remain intact with the lead, but Helena got seven from Kya Gardner in the quarter to help the Huskies extend the lead to 10 points going to the final quarter.

Down 35-25, Thompson needed a strong finish to the game to pull off the comeback, but Helena’s Jessica Powell made sure that didn’t happen with her touch from the free throw line.

After Thompson cut the deficit all the way down to four points at 40-36, the Huskies went on an 8-2 run to close the game. A big reason was Powell’s shooting from the line.

She drained all six of her free throws in the period to score her only six points of the game. That helped Helena finish the game with 13 more points, which matched Thompson’s final quarter to complete the 48-38 win.

Helena was led by 14 points from Harris, 11 of which came in the first half, while Gardner added 11. Beyond that, Kennedi Nobles added eight points for the Huskies.

Thompson was led by 11 from Samuel, while Lindsey Cook and Alecia Reasor both finished with eight.