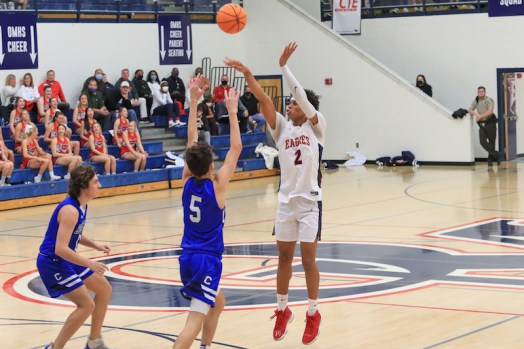 Oak Mountain was tested by Chelsea on Feb. 2, but the Eagles pulled away late to celebrate senior night with a win against their rival. (For the Reporter/Dawn Harrison) 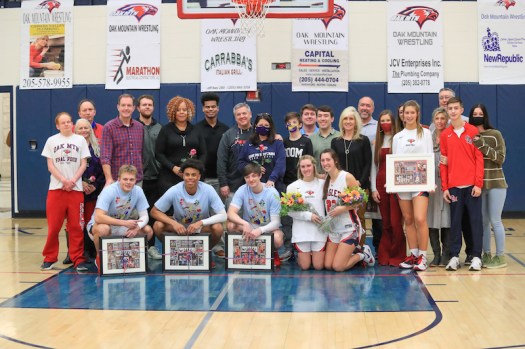 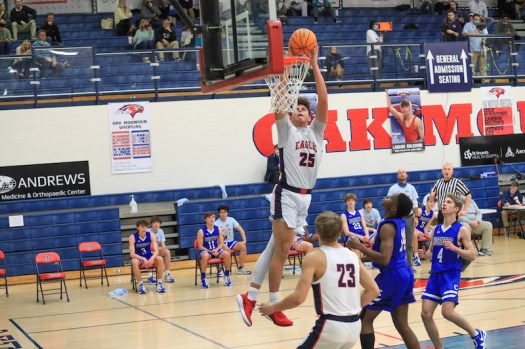 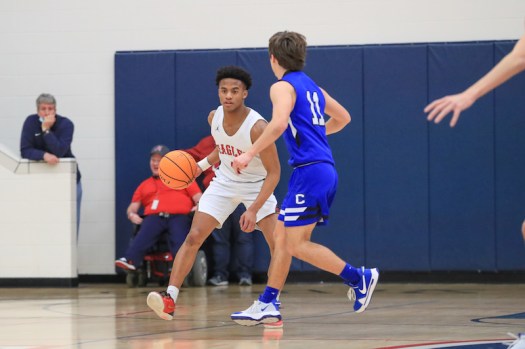 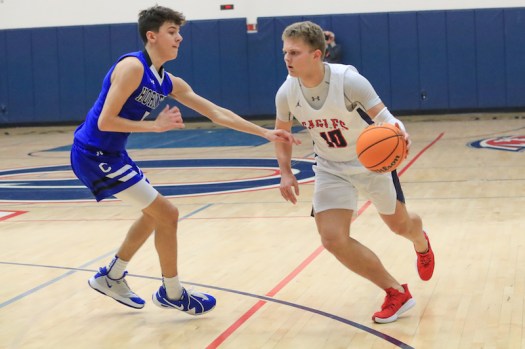 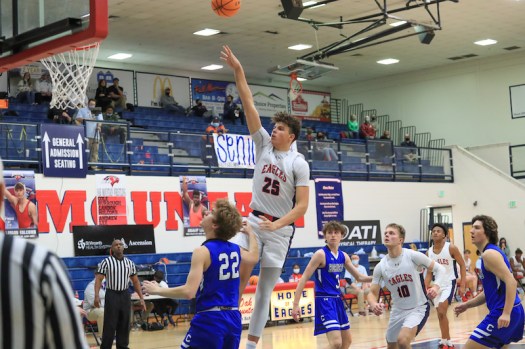 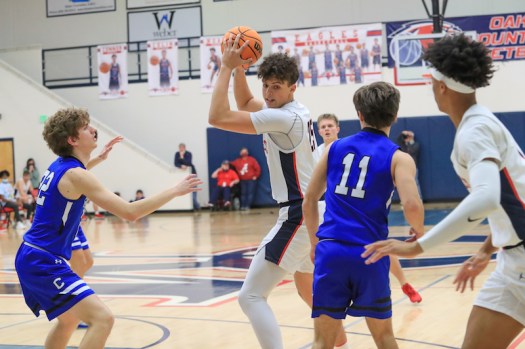 NORTH SHELBY – The Oak Mountain Eagles were looking to celebrate their seniors on Tuesday, Feb. 2, with a win against rival Chelsea, but it didn’t come without a battle from the county foe.

Going to the final quarter, the No. 3 Eagles only led by four points, putting their four-game win streak on the line thanks to a hard-fought effort from the Hornets.

But in the final quarter, Oak Mountain was at an advantage playing with the lead. In a battle of two good free throw shooting teams, that was key as the Eagles were sent to the line with the Hornets trailing.

They took advantage by making nine of their 11 free throws in the quarter, while the defense took advantage of the pressure on Chelsea with the deficit growing by allowing four points to put away a 54-41 victory.

One of the keys to the successful fourth quarter was guard Evan Smith. The junior, who has battled through an injury to his shooting hand just before area play began, has worked his confidence back up and made five of his six from the line in the fourth quarter to score five of his nine points in the win.

Wilder Evers, another starter normally hovering around double digits each game, was quiet for the first three quarters, but he closed the game out with four of his five in the final quarter to help the Eagles pull away.

But entering that final quarter, Oak Mountain struggled to find any separation from Chelsea, as both teams look to finish the final week of the regular season with confidence ahead of big area tournament matchups to kick off the postseason.

In the opening quarter, the two teams matched one another shot-for-shot.

Chelsea started fast behind two 3-pointers from Paul Lanzi and four points from Riley Edmiston. Those two played a key role in 12 points out of the gate for the Hornets against a fast and physical Oak Mountain defense.

But more impressive was the defensive effort from the Hornets in the quarter.

Taking on one of the best starting lineups in the state, Chelsea found a way to limit Oak Mountain to 12 points as well with Will Shaver the only player able to beat them, as he scored eight of the 12 in the quarter.

The problem for Chelsea throughout became the lack of a consistent scorer. Edmiston and Lanzi are the top two on the team in that category on a weekly basis, but Lanzi didn’t score the rest of the game, while Edmiston only added two more free throws in the second quarter.

A big reason for that was the shift in focus for Oak Mountain on the defensive end of the floor.

But the Hornets didn’t go away quietly.

They still managed 12 more points in the second period thanks to five points from Matt Gray and a 3-pointer from Holton Smith.

That helped Chelsea remain in the game at the half after Oak Mountain’s offense found a rhythm in the frame.

The Eagles got 3-pointers from Noah Young and Brady Dunn in the quarter, while Matt Heiberger and Shaver each scored four to help play a part in a 17-point quarter.

With the effort on that end of the floor, the Eagles were able to open up a five-point, 29-24 lead at the half.

Down by five to the No. 3 team in the 7A classification gave the Hornets some confidence that they could not only hang with Oak Mountain but possibly upset their rival.

And in the third quarter, they inched back toward the lead.

Chelsea got five points from Holton Smith and four from Warner Jones in the period to help play a part in 13 points.

But the defense clamped down again after making some adjustments, which became the key to ending the third quarter down by four.

Oak Mountain fell back to 12 points in the period, and if it weren’t for 12 points from Ryan Giegle, the Eagles would have gone to the final quarter trailing.

But his six points helped Oak Mountain take a 41-37 advantage at the end of the third.

Chasing from behind finally ended up costing Chelsea in the final quarter. Had the Hornets had the lead in the fourth, their free throw shooting might have gone on to make the difference, but instead, it was the Eagles putting the game away at the line for the 14-point win.

Oak Mountain was led by 15 from Shaver, 12 of which came in the first half, while Smith added nine. The biggest key for the Eagles was the level of balance with nine players scoring in the game.

Chelsea also had balance with eight scoring in the loss, including 10 points from Jones, eight of which came in the second half.