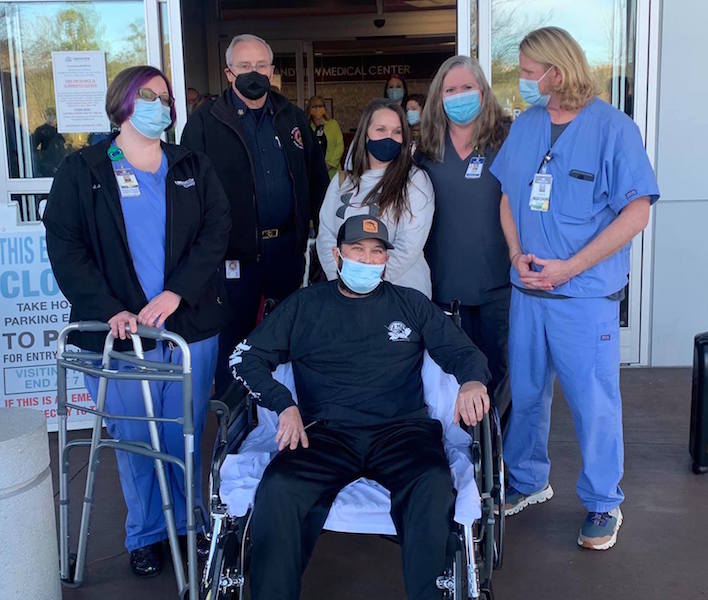 Being wheeled down a hallway full of cheering nurses and doctors, Mike Waits rolled through the automatic doors at the entrance of Grandview Medical Center to a sight he wasn’t sure he would ever see again.

After 32 days of being in critical condition, the Alabaster Fire Inspector finally beat COVID-19 and was released from the hospital on Friday, Jan. 29.

Not only did he see the outside world for the first time in more than a month, but he was given a hero’s welcome by members of several different fire departments from the Birmingham-metro area.

Waits has been a fire inspector for the Alabaster Fire Department since Feb. 10, 2007 and the appreciation for his work in the city during that time was more than evident by the warm sight of his brothers from surrounding departments. 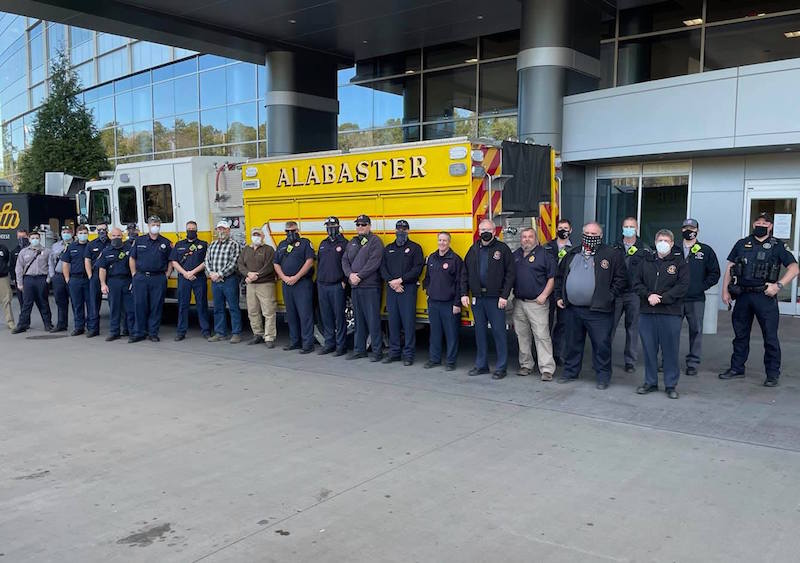 Several different fire departments came to give Waits a hero’s welcome as he was released from the hospital. (Contributed)

Before being admitted to the hospital, Waits did not believe something like this could happen to him. After some time, Waits noticed he was having difficulty breathing and decided to get tested for COVID-19.

Although the rapid test came back as negative, Waits knew something was wrong.

“It got to a point where I just couldn’t breath and had a lot of trouble with that,” Waits said. “I got a COVID test, the rapid test, that came back negative. After that, the doctor said to give it the weekend and we’ll do another test and check you out. That was the week of Christmas I believe.”

His health never did improve, which led to the trip to the hospital, which became an extended stay due to his inability to breath well on his own.

His time in the MICU at Grandview is still a blur to Waits. Unable to recall much of what happened during his month-long battle against the deadly virus, Waits said he did remember how he was treated at the center.

Since the COVID-19 units are restricted, Waits was unable to see his family while in the hospital. Now that he is at home with his family, Waits is seeing great improvement in his recovery, despite still having a long way to go before getting back to full strength.

“I’m doing better. I’ve got a long way to go, obviously from being down for so long,” Waits said. “I’m having to learn to walk again and do the daily functions that I used to do, like putting on shoes and clothes.”

Waits said one thing he would like everyone to take away from his experience is to take the virus seriously. He knows how lucky he is to be going home to his family.

“All I can say is take it seriously,” Waits said. “I’m 41 years old and I had never dreamed that it would have hit me like it did. So, it’s real. There’s no doubt about it.”