Briarwood has 17 ink to play at the next level 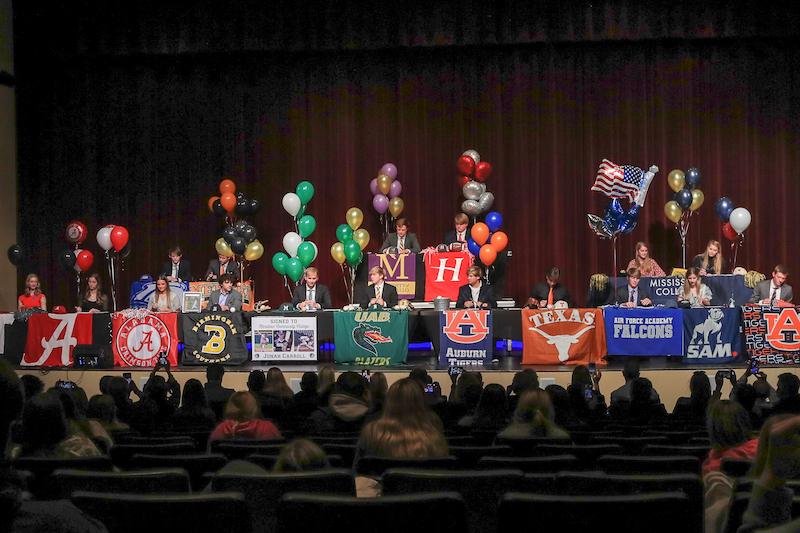 The largest signing class this year in Shelby County went to Briarwood Christian School, who had 17 student athletes sign to continuing playing sports in college. (For the Reporter/Dawn Harrison)

NORTH SHELBY – The COVID-19 pandemic didn’t stop Briarwood Christian School athletes from shining over the past year, and on Wednesday, Feb. 2, the school had a special accomplishment.

On National Signing Day, BCS had the largest signing class in the county after 17 players inked on the dotted line to play their respective sport at the collegiate level.

“This group here is the largest group we’ve ever had at one time,” Athletic Director Jay Matthews said. “These are the opportunities that the Lord has given to these students for their next assignments.”

The school had five sign to play baseball at the next level, the most of any sport, three to participate in ballet and dance and two each sign to play lacrosse and soccer; while cross country and track, swimming, football, tennis and fishing each had one athlete sign.

To show how talented the baseball team will be this spring, the five athletes that signed should all be some of the best players in the state and are headed to big schools.

Wesley Helms and Carson McKinney are headed to Auburn University and the University of Texas, respectively, to continue their playing days.

Tyler Waugh, who is one of the state’s best athletes, will stay close to home and attend UAB, while Hutson Parker will also remain close by attending Birmingham Southern College.

Jonah Carroll won’t be too far away after he signed to attend Meridian Community College to continue playing the sport as well.

The next highest group of signees came in the ballet/dance department with three receiving scholarship opportunities.

Anna Gardner Herren was the only one of the three on stage not to sign. She has been accepted to the University of Alabama’s dance department after an audition, but is also trying to decide whether she wants to attend Alabama or other choices, which include Harvard and Troy.

Cathryn Jacks and Macie Scaini, however, both signed to the school that also accepted Gardner. The two seniors will join Alabama’s dance department to continue doing what they love.

Luke Hand and Wes Love are both heading to play lacrosse at the next level with Hand headed to Mercer and Love headed to the University of Alabama at Huntsville.

In soccer, Anna Martin and Emily Scott will represent the girls team at the next level. Martin is headed to Samford University, while Scott is headed to Mississippi College.

Briarwood has also produced another top swimmer in the state, as Mason Mathias is headed to Auburn University to compete in the sport.

Football also had one signee with Carson McKeen moving on to the next level. McKeen was a lineman on both sides for the Lions and is now headed to Huntingdon College.

Tennis and fishing also had two stars sign to compete in college.

Luke Wolf will represent the tennis team when he heads to the Air Force Academy after a stellar career at Briarwood. But first, he’ll look to help the Lions win another state championship this spring.

Carson Miller will leave a storied Briarwood fishing program to join one of the country’s best collegiate fishing teams right here in Shelby County at the University of Montevallo.

Adrienne Goolsby will continue competing in the sport she loves as well. Goolsby, one of the top runners for Briarwood, will join the track and field and cross country teams at Mississippi College.

“These athletes live out a life that is gospel driven,” Matthews said. “Shining a light, being a great teammate, carrying on the things that have led to their success here; our prayer is that they are like flaming arrows being shot into the dark from these great homes of parents and this community.”

One injured in chase that ended in crash on…