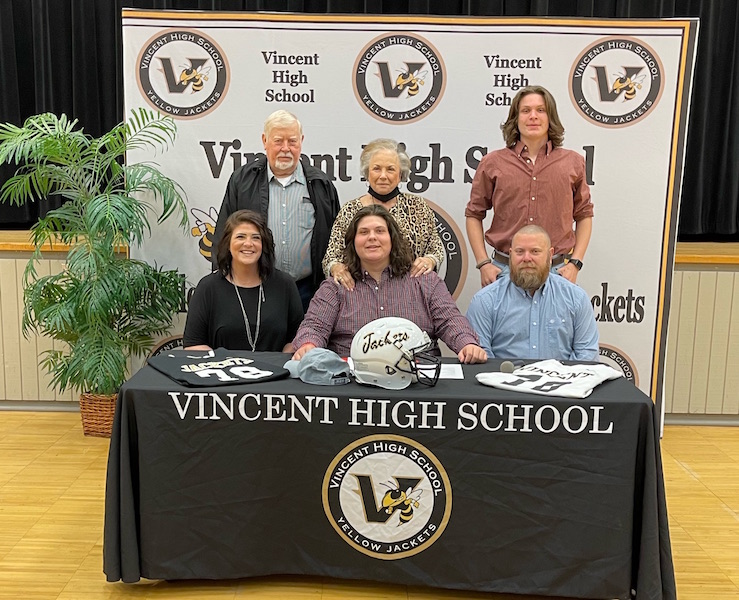 Vincent offensive and defensive lineman Paul Albright will now get to play college football after signing with Huntingdon on National Signing Day. (Contributed)

VINCENT – Despite a difficult year on the football field for the Vincent Yellow Jackets, they got a moment to celebrate on Wednesday, Feb. 4.

Sitting in front of family, friends, teammates, coaches and others, senior lineman Paul Albright signed to continue playing football at the next level during a special National Signing Day ceremony.

It was a special moment for the senior, who is now headed to Huntingdon, not only for what he was able to accomplish on the football field but because of what he and his teammates went through this season.

The Yellow Jackets not only didn’t get to play in their first three games of the season due to COVID-19, but they also lost teammate before the season in a car accident.

“There’s a lot of stuff this class has gone through,” Vincent head coach Lucas Weatherford said. “So the ability to end it with something like this is a pretty big deal. It’s always special when you’ve got a person from your school and community who can go on to the next level and do something great. They faced a lot of adversity this season. They lost three games to their senior season due to COVID and lost a teammate.”

But shining through as one of the senior leaders during a difficult time was Albright.

After not playing the first three games, the Yellow Jackets came back and picked up two big back-to-back wins against Horseshoe Bend and Fayetteville in September.

Despite the four-game losing streak that followed, that took a lot for a team that didn’t get to play for three weeks and didn’t have much preparation. Then, after losing the next four, the team never quit on the season and came back to beat Prattville Christian 33-28 in the final game of the season.

And through all of that, Albright was a big reason why as a leader playing up front on both sides of the ball.

“I remember my first day on the job, me and the football team right here and there was this big o’l baby-faced kid sitting right in front of me that introduced himself, and it was Paul,” Weatherford said. “Just seeing him change from that day to now, and the man he has become; he’s been a big part as a senior as far as turning this place around.”

Weatherford also praised Albright’s character and hard work in the classroom, and used it as a teaching moment for his younger players.

“I want the young guys in here to know that one of the big things that helped Paul out in this process was his academics,” the coach said. “He had a real high ACT score and a very high GPA. When I was able to speak to other colleges about him, I was able to say that. It always helps when they have the grades. Those grades will open up doors for you that you don’t even think are imaginable.”

Now, Albright will get the chance to prove himself at the next level by joining Huntingdon College to continue playing the sport he loves.