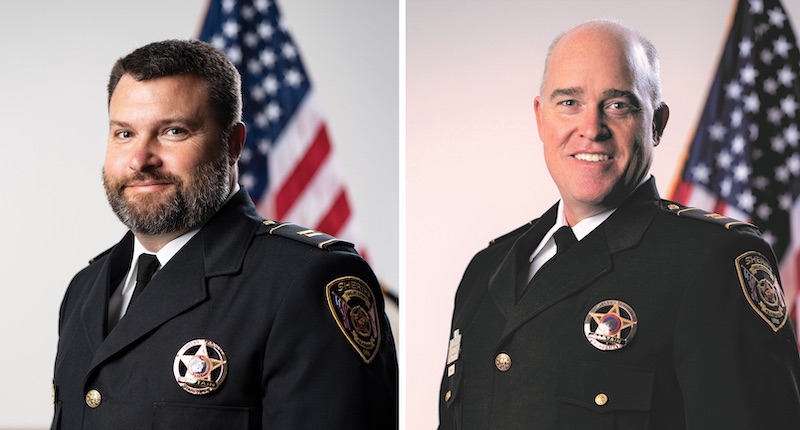 COLUMBIANA — Lt. Mark Bishop and Lt. Jason Myrick both have been promoted to the rank of captain, the Shelby County Sheriff’s Office announced Monday, Feb. 8.

“I am honored to announce the promotions of Lieutenant Mark Bishop and Lieutenant Jason Myrick to the rank of Captain,” Sheriff John Samaniego said Monday. “Throughout the years, these men have demonstrated excelled leadership, initiative, and responsibility at the Shelby County Sheriff’s Office. I know they will continue to succeed in their new roles, and I look forward to their continued service to our community.”

Bishop also supervised the records unit and assisted with processing applicants for employment with the Sheriff’s Office. In 2009, he was assigned as a supervisor in the Criminal Investigations Division where he continued to manage sex offender registration and also supervised the evidence technicians. In late 2012, he returned to the Patrol Division as a shift supervisor.

In 2013, Bishop was promoted to the rank of lieutenant and remained in the Patrol Division acting as one of the night shift watch commanders. In 2015, he assumed collateral duties assisting with the agency’s accreditation with the Commission on Accreditation for Law Enforcement Agencies, and in 2016, he became the agency’s accreditation manager. In 2017, the Shelby County Sheriff’s Office was re-accredited after receiving its first award in 2014. In 2018, Bishop was assigned to the Administrative Division where he continued as the accreditation manager and was involved in other hiring and community outreach functions.

During his law enforcement career, he served as a negotiator with the Sheriff’s Office Crisis Negotiation Unit for nine years. He has attended the FBI’s Southeastern Leadership Executive Development Seminar, and he was a 2014 graduate of Leadership Shelby County. He has been actively involved in the Law Enforcement Torch Run (LETR) for Special Olympics for the last 14 years, and in 2018, he was selected to represent Alabama as an officer in the Final Leg of the LETR for the Special Olympics USA Games in Seattle.

Myrick served in the U.S. Marine Corps as Military Police Specialist and Special Reaction Team member from 1991 to 1995. After receiving an honorable discharge, he accepted a position with the Birmingham Police Department in January of 1996 where he was assigned to Birmingham’s North Precinct. In July of 1998, he was hired by the Pelham Police Department serving as a patrolman, field training officer, Special Response Team member, departmental firearms instructor, and later, as the agencies’ training coordinator.

In 2006, Myrick was hired by the Shelby County Sheriff’s Office where he initially worked as a Deputy Sheriff. In 2008, he was recognized by the Alabama Attorney General as the Law Enforcement Officer of the Year for the middle district of the state. Within his first three years of employment, Myrick was selected for the Tactical Response Unit, became a field training officer, firearms instructor, and an honor guard member. In 2009, he was selected to serve as a task force officer with the United States Marshals Service, Gulf Coast Regional Fugitive Task Force. In the years to follow, he worked on numerous high-profile cases with the USMS, to include an FBI Top 10 case.

After returning from the Task Force in 2013, Myrick served in the Criminal Investigations Division as an investigator, until his promotion to sergeant in 2015. He was then assigned as a supervisor of the Shelby County Drug Enforcement Task Force and became the Tactical Response Unit Commander. During this same time, he was elected as president of the Alabama Tactical Officer’s Association, serving in that role for over two years. In 2017, he was promoted to the rank of lieutenant, where he was assigned to the patrol division as a shift commander. In 2020, he was given command of the Shelby County multi-jurisdictional Special Operations Group, which is comprised of the Tactical Response Unit, Crisis Negotiations Unit, Mobile Field Force, and the Explosive Ordinance Disposal liaison team.

As his first assignment as captain, Myrick was assigned as the commander of the Criminal Investigation Division. He holds a Master’s Degree in Justice Administration and Crime Management, a Bachelor’s Degree in Leadership, an Associate’s Degree in Law Enforcement, and is a graduate of Leadership Shelby County. He is the recipient of the Medal of Valor, a meritorious service award, and the Sheriff’s Award.

Shelby announces he will not seek term in 2022