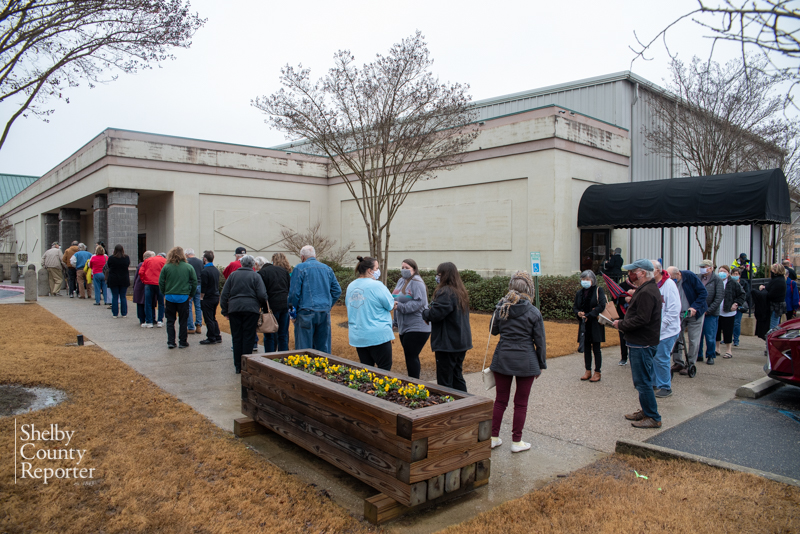 Residents wait in a long line at the Pelham Civic Complex to receive one of about 500 doses of the COVID-19 vaccine during a vaccination clinic in January. (File)

COLUMBIANA – Local officials are pushing for the Alabama Department of Public Health to allocate more COVID-19 vaccines to Shelby County.

County Manager Chad Scroggins provided another update for the Shelby County Commission on Feb. 8 regarding the obstacles the county has faced in receiving a reasonable share of vaccine doses to administer to the county’s nearly 225,000 residents.

“We’ve talked consistently for the last six weeks about the lack of vaccinations that our county has received,” Scroggins said, noting the ADPH decides how many doses are distributed to each county throughout the state. “You are getting calls from the residents of our county, especially those that are 75-plus, and now, 65-plus, that are frustrated about the rollout.”

Scroggins said one obstacle residents encountered was calling the ADPH number repeatedly to try to get a vaccine appointment and their calls not being answered because of an inadequate number of call takers.

According to Scroggins, the vaccination clinic held at the Pelham Civic Complex in late January ran smoothly and resulted in 511 people receiving vaccine doses by 12:30 p.m.

“Our EMA office and the city of Pelham combined together and ran that thing very quickly,” he said, and added, “If we had more vaccines, we could have done more.”

Scroggins said the ADPH canceled another clinic that was scheduled to be held in Columbiana on Feb. 3; however, after that, more people were showing up on a daily basis at the Shelby County Exhibition Center for vaccination clinics that did not exist.

“We have made the Alabama Department of Public Health aware of all these errors,” he said.

A promise from the state that Shelby County would start to get a boost of 2,000 doses a week for eight weeks dissolved, too, along with hopes of educators and staff at local schools having access to vaccines sooner.

“(State) Rep. Corley Ellis has really taken up this fight for us, and I appreciate his efforts in doing so,” Scroggins said. “He’s stayed on it. He continuously hounds those in Montgomery to try to help us with this situation.”

Scroggins said 4.4 percent of Alabama’s total population lives in Shelby County, but the county has received significantly less than 4.4 percent of the vaccinations that have come into the state.

Meanwhile, counties with smaller populations than Shelby County, such as Calhoun County, are receiving as many as 1,000 doses per day in some cases.

“It simply doesn’t make sense,” he said. “We will continue to bring this issue up with the Alabama Department of Public Health and the governor’s office. We’re glad that they’re coming into our state, but we really think that allocation should follow the population.

“We’re the largest, most populous county in our ADPH area,” he continued. “We’re getting significantly less vaccinations than our other counties, and quite frankly, I’m upset about it. We will continue to push this issue.”

Over the next couple of weeks, Shelby County is slated to receive 2,000 additional doses, followed by weekly batches of 500 doses, “fingers crossed,” Scroggins said. “We really need significantly more than that.”

Commissioner Lindsey Allison echoed Scroggins’s statements and complimented the county’s staff on how it has handled the influx of calls and messages from residents with questions about the vaccinations, the allocation of which the county has no control.

“This is the No. 1 issue for this Commission, to figure out how we get our fair share of shots for our residents,” Allison said. “The staff has been on it 24/7. We’re fighting to get it.”

On Thursday, Feb. 11, hours after the county announced it would host three appointment-only COVID-19 vaccination clinics this month, all appointment slots were filled.

The first-dose Moderna vaccine clinics for seniors age 65 and older will be held in Columbiana and Pelham on Feb. 17, Feb. 24 and Feb. 25.

Additional vaccination events are planned in the coming weeks as vaccine availability increases.

Updated information and links Shelby County receives regarding the COVID-19 vaccine are posted at Shelbyal.com/CivicAlerts.aspx?AID=236.

“We’re not here to make recommendations as to what people choose to do with their healthcare,” Scroggins said. “At the end of the day, the more people we can vaccinate, the better we can help our population try to get back some sense of normalcy.”