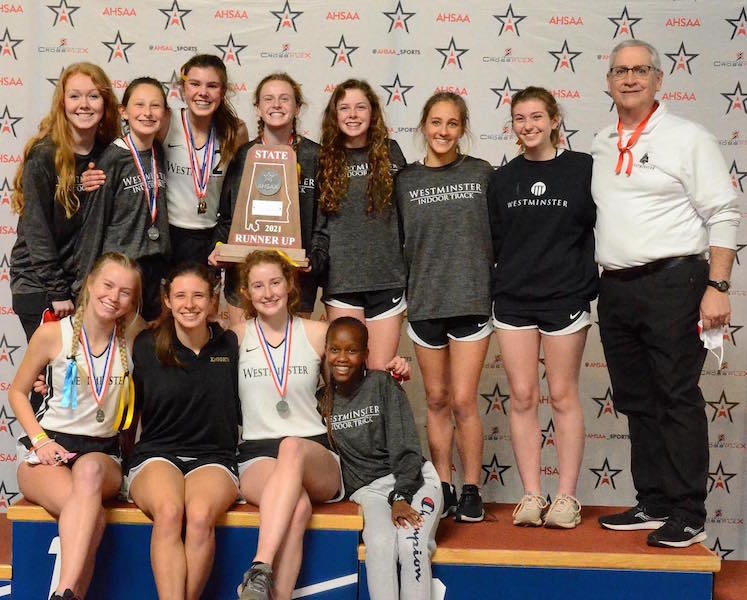 BIRMINGHAM – Hallie Porterfield capped off a special indoor track and field career for the Westminster at Oak Mountain girls’ team on Saturday, Feb. 6, when she won three individual state championships and helped the Knights finish second in the team standings.

The senior won all three distance races, taking home state championships in the 800-meter, 1,600-meter and 3,200-meter runs, while Westminster’s girls had a total of six podium finishers and four fourth-place finishers.

Her tightest win came in the 1,600-meter run, which she crossed the finish line in 5:24.49, less than a second ahead of second place.

Porterfield also finished fourth in the 400-meter dash with a time of 1:01.82 to add another impressive finish.

The Knights also got impressive finishes from teammate Hannah Adams in the same events. The sophomore finished third in the 1,600-meter and 3,200-meter races and fourth in the 800-meter run.

As a team, the Knights also finished on the podium in the 4X800-meter relay race thanks to a time of 10:58.18, which earned them second place.

The 4X200-meter relay team also finished in the top four by claiming fourth behind a time of 1:59.31.

As a team, Westminster finished second in the 1A-3A girls standings with 75 points.

In the 4A/5A state meet, Shelby County’s David Vick finished off an impressive season for the Wildcats.