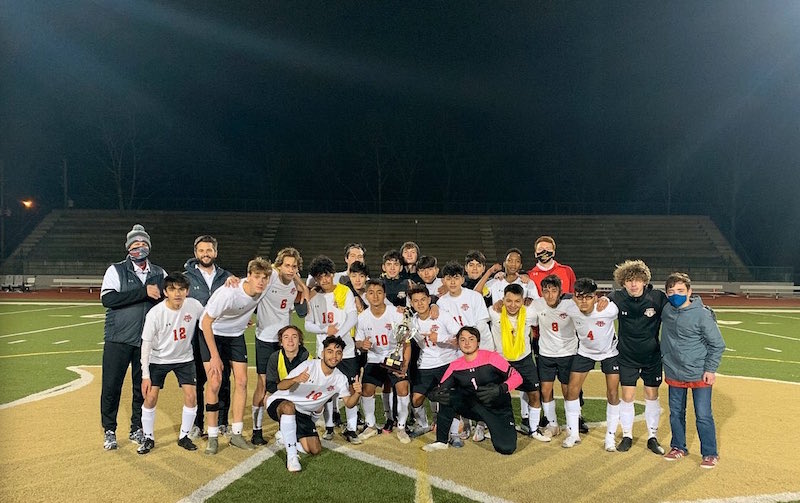 Thompson took down Pelham to open the Lakeshore Shootout by winning the Border War trophy and followed that with two more wins to finish the tournament undefeated. (Contributed)

After one of their best starts in school history a season ago, the Thompson Warriors’ boys soccer team felt slighted at not getting an opportunity to compete for a state championship when the season was cut short due to COVID-19.

The Warriors were 12-1-1 when the season was called due to the virus with their only loss to top-ranked Hoover 1-0. But that helped drive a determined team into the offseason and now into the start of the 2021 season, as Thompson picked up right where it left off to begin the new season.

Competing in the Gold Division of the Lakeshore Shootout against some of the state’s best teams Feb. 4-6, the Warriors got off to an ideal start. They not only won all three of their games, but won the Gold Division Flight B championship with a total of 26 points in their three games played.

Thompson kicked off the event in a rivalry battle with Pelham in the first matchup between the two in a while.

With both in their respective classification’s top five entering the season, each was looking to get off to a solid start.

But it was Thompson that won the Border War trophy on Pelham’s field thanks to two goals from Jahir Hernandez and one each from Jonathan Gonzalez and Raul Rivera.

That helped lift the Warriors to a 4-2 win to start the season and the tournament 1-0.

A night later on Friday, Feb. 5, the Warriors took to their home field for the first time this season and picked up a tightly contested win over McAdory.

In a game that didn’t start until 8:30 p.m., the Warriors were able to knock through one goal, which became the difference in a 1-0 win to improve to 2-0.

Thompson was then forced to come back in a quick turnaround to take on county foe Helena at 9:30 the next morning.

But despite playing for the third consecutive day and the early wakeup call, the Warriors didn’t hesitate getting in a rhythm.

They went on to score an early-season high of five goals in the matchup to grab a 5-1 victory against the Huskies, which marked Helena’s only loss of the tournament.

That helped Thompson finish the Lakeshore Shootout 3-0 to claim the Gold Division title thanks to 26 points, which was the fourth most points of any varsity division in the tournament.

With each win worth six points, goals worth one point up to a maximum of three and shutouts worth one point, the Warriors achieved points in each possible category at least once in their three matches.