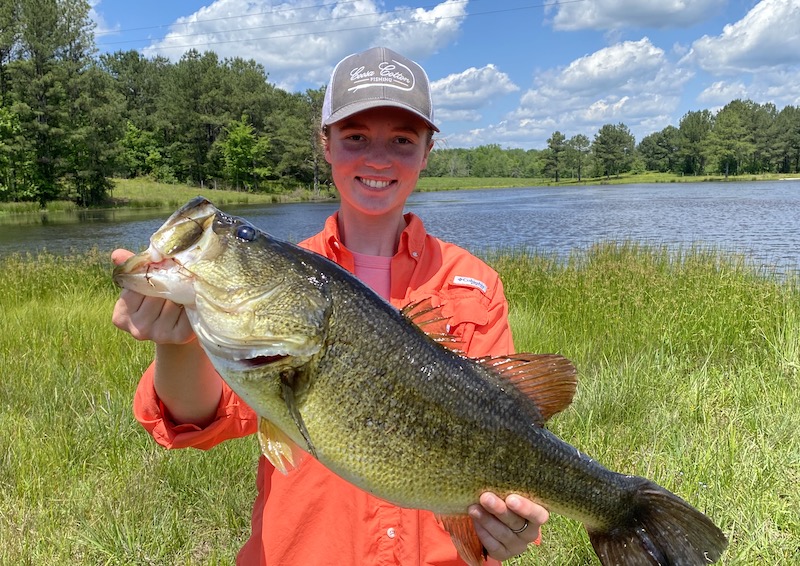 Ava Vansant shows off one of her big catches for the Shelby County High School fishing team. (Contributed)

Ava Vansant is not your average teenage girl. While she enjoys many of the same sports and other activities that most girls her age become involved in, Vansant has also stepped out of the traditional extracurricular role and opened doors for the girls coming up behind her at Shelby County High School.

A junior, she is ranked as one of the top 12 anglers of the SCHS fishing team and the only girl to make the varsity team for this season. As an incoming freshman three years ago, Vansant wasn’t even aware that the school had a fishing team until a friend mentioned it in passing.

Raised by parents who enjoyed the sport, Vansant was no stranger to casting a line and wasted no time signing up to join the team. Her talent and skill were evident not long after when at one event, she alone was the only team member to catch her limit when none of the guys were able to.

It hasn’t been easy though. While respected by her own team and leaders, Vansant told us that being one of the few girls that makes it to the trails, has forced her to grow a thick skin.

“Sometimes guys on other teams will say mean things, and it’s best just to ignore them,” she said.

Perhaps having a female coach has helped Vansant.

“It’s rare to have a girl on the fishing team and we have three,” coach Heather Keller said.  “Ava is the only one to reach the qualifications for the varsity team so far. Even at the larger events we participate in there is rarely a female role model among the professional anglers. She’s a hard worker, loves the sport, and loves the water. I can’t wait to see what she does for her senior season.”

Fishing isn’t just a team sport for Vansant; it’s a family sport too. Her dad, Andy, who is also her boat captain, said, “I feel lucky that Ava has always enjoyed the activities and hobbies that I do; fishing, hunting and working. We also have the same birthday.”

Her parents’ mentorship in work ethic has not only proven successful on the lakes and nearby waterways, but it also shows up in other ways.

As a member of Future Farmers of America, Vansant took on an unexpected project for a girl, and she’s found it to be rewarding and a way to stay in shape. After the storms that cost Shelby county so many trees in October, Vansant began chopping wood. She enjoyed it so much, she’s turned it into her supervised agriculture experiment for the year. She’s making the grade and a little extra cash on the side delivering it to Tin Top Barbeque in Columbiana.

When asked what advice she had for other girls who may be on the fence about trying a less traditional sport for girls, like fishing, Vansant said, “If you like it do it, and don’t worry about what folks say.”

Vansant and her team are always in need of sponsors to cover travel equipment expenses and are thankful to local businesses that help. If you’d like to sponsor Vansant or any other team member, you can reach coach Heather Keller through Shelby County High School.