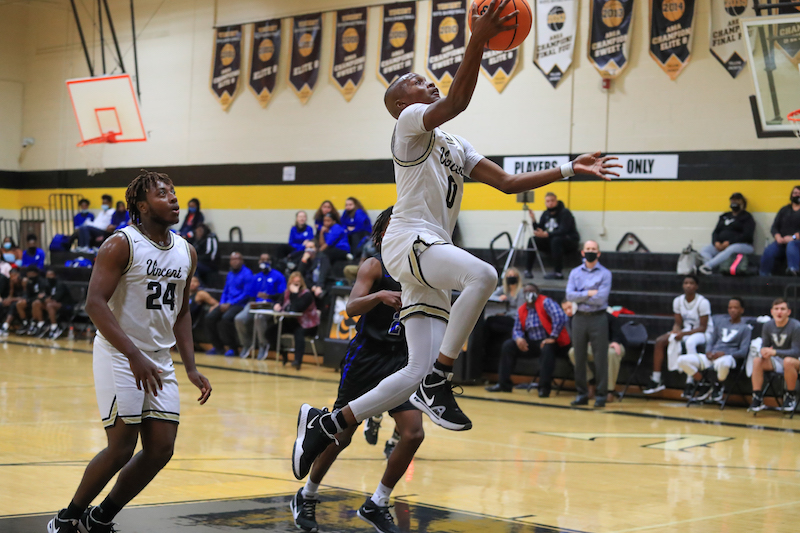 VINCENT – For a while, it looked like a 14-year streak was going to come to an end for the Vincent Yellow Jackets.

The 2020-2021 basketball season for the Yellow Jackets was a battle from the second last season ended after the loss of four two-year starters from back-to-back Elite Eight teams.

That meant this year’s team carried the burden of not only replacing those talented players but also continuing the expected success at Vincent.

And for much of the season, that proved to be a difficult task.

But on Wednesday, Feb. 10, when it came to keeping Vincent’s sub-regional streak intact, the Yellow Jackets didn’t flinch.

On the road as a three seed after splitting their regular-season matchups with B.B. Comer, the Jackets took all of the lessons learned this year and combined them into a 59-50 win to cement a spot in the sub-regional round of the playoffs for the 15th year in a row.

The Yellow Jackets, who had battled a stretch of losing eight of 10 games in the middle of the season, found a rhythm after that, winning six of their next eight games.

That kept them from being the four seed in the area tournament after finishing area play 3-3 ahead of Fayetteville, but Vincent went on to lose back-to-back games to Shelby County and Ragland to close out the regular season.

But it was a team that saw 12 of its 14 losses during the season come by 10 points or less, including eight by five points or less.

“This team has not had any breaks go their way, whether it be late game situations, COVID related, you name it,” head coach John Hadder said. “It’s a great group of kids though, and they never gave up.”

With so many closes losses, the Jackets knew they could compete with anyone, which allowed them to enter the area tournament matchup with B.B. Comer confident in having a chance to win.

Vincent came out and defended extremely well in the opening period to take a quick lead in the game, which helped the Jackets play from in front in a pressure-packed game with their season on the line.

Their early defense, which gave up seven points in the first quarter, led to chances on the offensive end of the floor and some easy baskets as five different players scored in the opening quarter to total 14 points.

Behind four from both KJ Youngblood and Ty’Qun Goodman, Vincent was able to double up the Tigers to take a seven-point advantage at the end of one.

The rest of the game was spent fending off B.B. Comer, but the Jackets had an early cushion in the all-important game, and they extended it slightly in the second quarter.

Despite missing all four of their free throws in the second quarter, the Yellow Jackets got 13 more points on the offensive end of the floor thanks to a 3-pointer from Will Harris and four more points from Youngblood.

The Tigers started to find some success offensively and posted 12 points, but Vincent was able to take an eight-point, 27-19 lead into the half.

But the two games this season have gone down to the wire and B.B. Comer wasn’t going to let this one get away without making a run.

The Tigers came out with adjustments on the offensive end of the floor in the second half, building off of the strong finish to the first half, and scored 21 points in the third quarter.

That mark became the most from either team in the game as the Tigers stormed back into the game.

Vincent was able to maintain the lead thanks to the will of Goodman and Blake Allums, who both had six points in the quarter. Goodman hit three field goals, while Allums knocked down two 3-pointers.

But B.B. Comer had made it a one-point game at 41-40 going to the final period, and the Tigers had stolen away all momentum.

Goodman’s confidence, however, was now through the roof for the Yellow Jackets.

Knowing his team needed somebody to step up big with their season on the line, the sophomore followed up his six-point third quarter with a nine-point final quarter, making five of eight from the free throw line and knocking down two field goals.

That accounted for half of his team’s points, as Vincent closed the game with its best offensive quarter of the night thanks to 18 points.

That became more than enough to put away the Tigers, who scored 10 in the period.

It was a strong finish for the Yellow Jackets, who were determined to have their season and sub-regional streak continue.