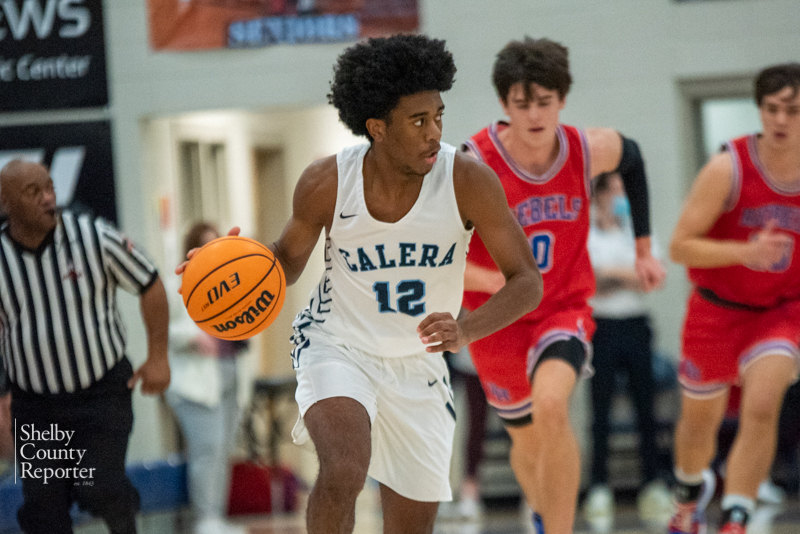 Calera took down Helena in the first round of the area tournament on Feb. 10, to cement a spot in the postseason for the fifth consecutive year. (File)

CALERA – The Calera Eagles won nearly every area game of the 2020-21 season by double digits and their third matchup against the Helena Huskies in the first round of the area tournament was no different on Wednesday, Feb 10.

After fending off an early push from the Huskies, Calera settled in at home pulling away for a 62-36 win, which assured the Eagles a spot in sub-regionals for the fifth year in a row.

Both teams crept out to a slow start as the Eagles led 3-1 with 3:12 remaining in the first quarter. Calera senior Jordan Eggleston put an end to that though, getting to the rim and pulling down offensive boards.

The Eagles scored eight straight to end the period capped by a nifty give-and-go from Eggleston to Jamarius Ford and back to Eggleston in transition.

Just when it looked like Calera wasn’t going to be challenged, the Huskies got back into the game. Owen Davis hit Helena’s first field goal 44 seconds into the second quarter and hit another three on the next possession to give his team some momentum.

Ethan Acosta’s basket drew the Huskies within two at 13-11, but Eggleston provided the answer for Calera once more. He gashed the middle of the Helena defense again, drawing the foul while dropping another basket in for a three-point play.

At one point, Eggleston had 11 of Calera’s 16 points. As he hit the bench for a breather, his teammates rallied and pushed the lead back to double digits with an 11-0 run.

Fellow seniors Isaiah Green and Keyshawn Haynes each scored twice in the closing minutes of the first half with Haynes hitting a leaning 3-pointer from the top of the arc at the buzzer for a 29-16 halftime lead.

Helena readied their final push coming out of the break, but Calera was able to keep pace and maintain the big lead. Joel Logan’s second basket of the third quarter made it 37-26, but that’s as close as the Huskies got the rest of the night.

The Eagles’ defense turned up the intensity and started getting into the passing lanes for fast break opportunities. Duke Chambers had eight in the quarter, including five in Calera’s 12-0 burst to end the period.

In addition to the turnovers, the Eagles also controlled the boards with 10 offensive boards while not allowing one until the fourth quarter.

They also scored the first seven points of the fourth quarter and grew the lead to 30 to the approval of the home crowd as they cruised from there.

Eggleston led all scorers with 17 points and was joined Chambers and Haynes in double figures with 10 points each.

Davis and Acosta finished with eight and seven points, respectively, for Helena.

The Eagles will now host Pelham at 2 p.m. on Saturday in the area tournament championship before heading on to sub-regionals next week.