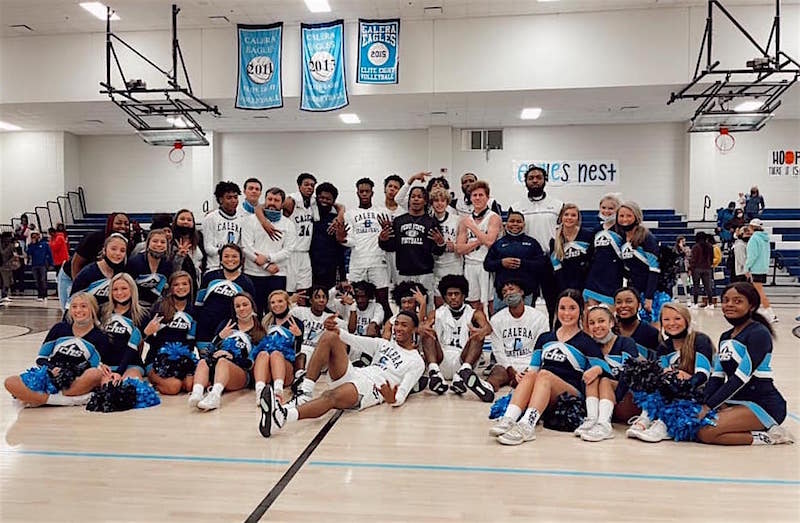 The Calera Eagles outscored Pelham 17-3 in the third quarter to create separation en route to a 61-42 win to repeat as area tournament champions on Feb. 13. (Contributed)

CALERA – The Calera Eagles have left no doubt in area play this season, and that continued in the Class 6A, Area 6 Championship game on Saturday, Feb. 13.

Sitting at 7-0 in area play going into the game (6-0 in the regular season, 1-0 in the postseason), Calera put together a dominant second half against county foe Pelham to pick up another dominant win, this time taking down the Panthers 61-42 to become back-to-back champs in the area.

The title gave Calera an 8-0 finish against area opponents this season and allowed the Eagles to earn hosting rights in the sub-regional round of the postseason.

For a while, Pelham kept the game close thanks to a tight first-half battle.

That has been the story in the three matchups between the two this year. The Panthers came out hung with the Eagles in the first two quarters, with the game played with single-digit deficits.

Pelham’s offense wasn’t as potent as it has been at times this season, but the defense showed up and held a balanced and dynamic Calera offense to 27 points in the first half.

Calera showed its promise in the opening quarter, however, with 20 points, which helped the Eagles take an early 20-12 lead.

That’s when Pelham responded with a strong defensive effort. The Panthers only scored nine points in the second quarter, but the defense held Calera to seven points, allowing Pelham to battle back to within six at the break.

But after the halftime break, the Eagles were able to make adjustments, while the Pelham offense struggled, particularly in the third quarter.

The Panthers came out of the break and couldn’t find any rhythm on that end of the floor, totaling three points in the frame.

Calera capitalized with its first of two consecutive 17-point quarters in the second half to open up a 44-24 going to the final quarter.

Pelham bounced back with 18 points in the final period, but it was too little too late as Calera scored 17 points to put the game away and claim the championship.

Calera was led by Jordan Eggleston, who was named tournament MVP, while Duke Chambers and Tre Stoutermire were also named to the All-Tournament team.

Roy Gonzalez and Kendan Maddox were named to the All-Tournament team for the Panthers.

Calera will host Benjamin Russell on Tuesday night with a spot in the Sweet 16 on the line, while Pelham will travel to Wetumpka.