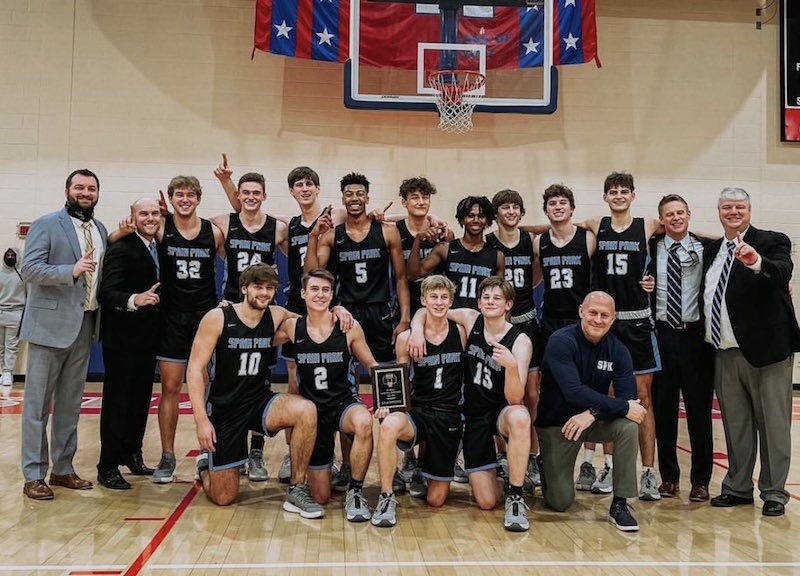 The Spain Park basketball team took down Vestavia Hills in the area championship game on Feb. 13 to avenge to losses during the regular season. (Contributed)

VESTAVIA HILLS – After losing by a combined eight points in two regular-season matchups against Vestavia Hills, the Spain Park Jaguars had one last chance to down the Rebels on Saturday, Feb. 13, and this time, more was on the line.

Playing for the area tournament championship and home-court advantage in the Sweet 16, both teams knew what was at stake, but the Jags had been so close the previous two matchups that they also had motivation on their side.

Knowing that the effort defensively could make all the difference in the game, Spain Park focused heavily on that side of the ball, which allowed them to held the Rebels to 14 points in the first half and 37 for the game.

Combined with an impressive night from Cam Crawford offensively, who scored 19 points, the Jaguars were able to avenge the two early-season losses to take home the area championship by a final score of 47-37.

It continues to mark a remarkable turnaround for the Jaguars in year three under head coach Chris Laatsch.

Combined between the year before Laatsch arrived and his first season trying to turn around the program, the Jaguars had lost 43 combined games and won just 12.

But during his first season leading the Jags, the potential was already starting to show, as the culture began to change.

Last season, Spain Park proved the turnaround was real by winning 20 games and advancing to the Elite Eight in his second season.

Now, a year later, the Jaguars have taken it a step further in Laatsch’s third year leading the program.

They’re headed back to the Sweet 16 for the second consecutive year and have also won their first area championship since the 2015-16 season, matching that Final Four team’s win total of 25 after improving to 25-6 on the season.

Early against the Rebels in the championship game, Spain Park set the tone for how the game was going to be played despite a tight battle.

The Jags jumped out to an 8-0 lead before the Rebels battled back with a 9-2 run to end the opening period.

But Spain Park’s defense came ready to play and it showed in the second quarter.

After falling behind briefly, the Jags clamped down defensively to end the quarter on a strong run. They gave up just five points to Vestavia Hills in the frame and took a 20-14 lead into the halftime break.

The second half featured more compelling back-and-forth play on the offensive end of the floor, but the Jaguars excelled then as well.

In the third quarter, they outscored the Rebels 12-11 to extend the lead by one more to 32-25 heading to the final period.

But the Jags have struggled to close out leads at times this year, including a matchup a few weeks ago against Vestavia Hills in which they led the entire game but went on to lose by one point.

This time around, however, the defense not only played one of its best games of the season to close out the win, but the offense put together its best quarter of the night.

Spain Park scored 15 points in the fourth quarter and gave up 12 to put away the 10-point win and claim the area title.

Crawford led the way with 19 points in the win, while J.R. Lambert also finished in double figures with 10. Behind those two, Blake Floyd added eight and Josh Harrington six.

Crawford has stated multiple times that the postseason has marked the start of a new season with a new effort.

Now, the Jaguars are two wins from the Final Four and four wins away from a state championship.

Their path to a title will continue at home on Friday, Feb. 19, with matchup against Sparkman in the Sweet 16.