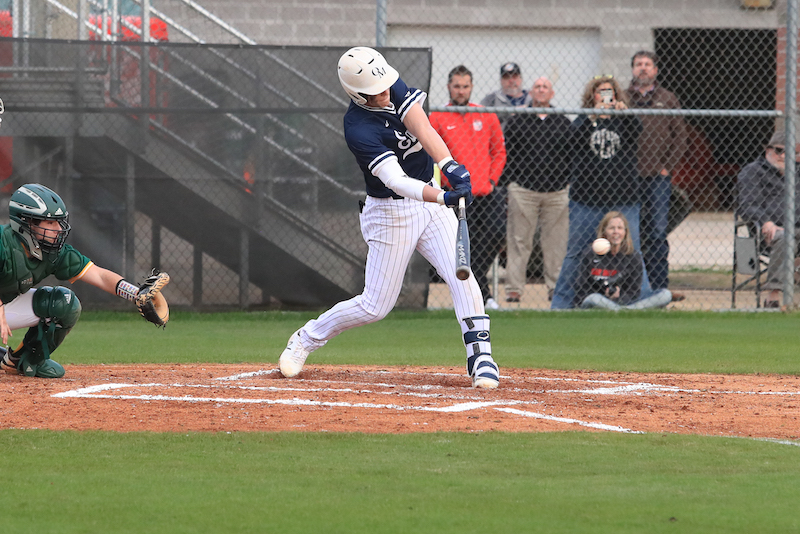 Oak Mountain opened the 2021 baseball season with a sweep against Pell City on Wednesday, Feb. 17. (File)

NORTH SHELBY – After two one-run wins in a row against Briarwood on March 10 and 12, 2020, the Oak Mountain Eagles saw their season end one day after a 3-2 win against the Lions on March 13 when COVID-19 forced the season to end early.

Almost a year later, the Eagles returned to the diamond on Wednesday, Feb. 17, and did so just how they left off last year—with two more wins.

Opening the season with two games against Pell City, Oak Mountain outscored the Panthers by a combined 22-4 to sweep the doubleheader and start the season 2-0.

The opening win wasn’t just due to hot bats at the plate, but strong pitching form Connor Adams and Luke Smith.

The duo combined to allow four hits and struck out nine while completing a shutout.

That allowed the Eagles to play loose at the plate, as they scored six runs in the second inning and went on to win the season opener by a final of 9-0 against the Panthers.

Oak Mountain’s runs in that second inning were part of a two-out rally that started with a walk to Taylor Bush. That was followed by an RBI single from Chapman Wallock.

Following three consecutive walks, the Eagles led 2-0, but it was about to grow exponentially.

Davis Gillespie stepped into the batter’s box and in a 1-0 county, he drove a ball deep over the left-field wall for a grand slam to push the lead to 6-0.

That was more than enough cushion for the Eagles in their shutout effort, but they added one more in the fourth on a sac fly and two more in the fifth on an error and sac fly.

Oak Mountain was led by Gillespie with a 2-for-4 game that included four RBIs and one run scored. Stephen Moraski added two RBIs and two runs scored after going 1-for-3.

Game two was similar in the fact that it featured a large portion of Oak Mountain’s runs coming in one inning, but it took longer for the bats to warm up.

Once they did, however, the Eagles were able to end the game early due to the 10-run rule.

The Eagles scored 14 runs thanks in large part to Maddox Macrory, who finished the game 3-for-5 with five RBIS. Gillespie went 2-for-2 in the game with a walk and run scored, while Kyle Smith also went 2-for-2 with an RBI, a run scored and a walk. Oak Mountain had 10 players pick up at least one hit in the win.