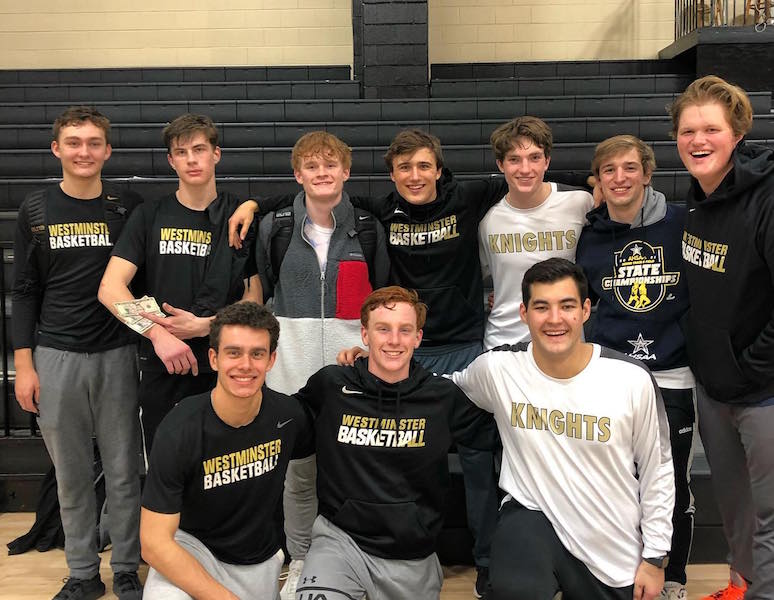 Westminster’s boys basketball team advanced to the Sweet 16 for the first time in school history on Wednesday, Feb. 17, thanks to a 71-68 win against Cleveland. (Contributed)

CLEVELAND – In a tight game, the Westminster at Oak Mountain Knights put together a second half for the history books when they scored 20 and 21 points in the third and fourth quarters, respectively, to cement a spot in the Sweet 16 for the first time.

Close in previous years, the Knights could smell the sweet aroma of making school history after 15 points in each of the first two quarters, which led to a confident offense in the second half.

They poured in 20 points in the third quarter to get to 50 and 21 in the final quarter to total 71 for the game and narrowly edge out Cleveland for a 71-68 win to advance to the Sweet 16.

The junior guard scored 39 in the game, totaling more half of his team’s points in the victory to play a key role in school history.

In addition to his 22 in the second half, Likens posted 17 in the first half, which kept the Knights in the game at the break.

He scored the majority of the team’s points in the opening two quarters, but Andrew Purcell also got off to a strong start.

Purcell knocked down a 3-pointer in the opening quarter and totaled seven points in the period before adding two more in the second quarter for nine of the team’s first-half points.

Confident coming out of the halftime break after scoring 17 in the first half, including three 3-pointers in the second quarter, Likens got right back to work in the third quarter.

He nailed two more 3-pointers and went a perfect 5-5 from the line, which included finishing off an and-1 to post 13 points in the third quarter.

In addition to him, Eddins knocked down a 3-pointer, while Eller started a strong second half with four points.

That led to a more balanced final quarter, as the Knights got nine more from Likens but also got five from Eller, four from Eddins and three from JD Thomas.

Westminster also closed out the game thanks to 3-pointers from Likens, Eller and Eddins in the quarter. One less of those or three less free throws and the outcome could have been much different.

Likens’ 39 were a game-high, while Eller added 11. Purcell and Eddins each added nine points in the historic win.