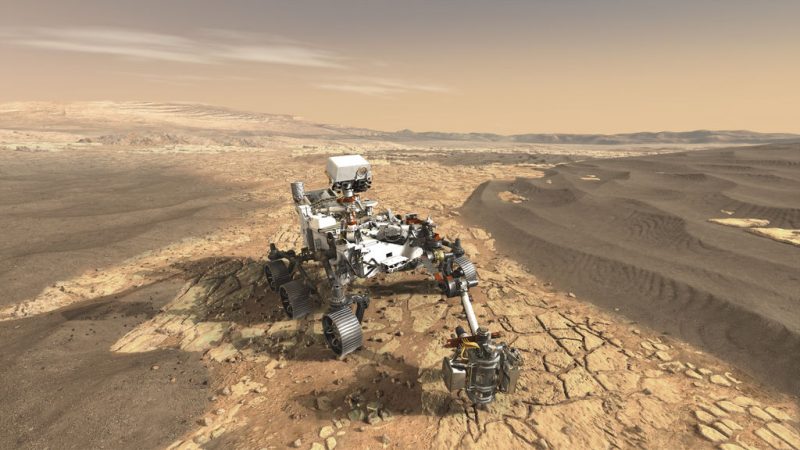 An interesting fact about the Mars Rover, which landed on the planet Feb. 18, is that a microchip on board bears the names of millions of space enthusiasts, including at least one local. (Contributed)

ALABASTER – Local surgeon Dr. Clement Cotter is one of millions who had their name touch ground on Mars, so to speak, on Feb. 18. The Mars Rover Perseverance Mars successfully took place on Feb. 18.

Cotter is a plastic surgeon at Cotter Plastic Surgery and has been an Alabaster resident for 30 years. He came across the opportunity to sign his name up for the event months ago and jumped at the opportunity. Growing up in Huntsville has given Cotter an additional sense of appreciation and interest in the space program.

“Growing up in Huntsville during the 1960s, I have long been interested in the space program at all its various levels,” Cotter said. “All of the space business is kind of part of my upbringing, and there’s several things going on shortly here about Mars,” Cotter said. “I think there are three missions going up there, but the one I’m looking at is one from space.com and NASA.”

The unique element to this launch is the helicopter that will be on board. The historical moment has ties to local students, according to Cotter. The name for the helicopter, “Ingenuity,” was chosen by a Tuscaloosa High School student, Vaneeza Rupani.

“There is an actual helicopter on board to test powered flight on another planet for the first time,” Cotter said. “Sound will be transmitted from the surface of Mars, from another planet, for the first time. Brad Pitt was the celebrity spokesperson for the mission and his name along with mine and about a million other folks’ names are engraved on a microchip that is onboard.”

After seeing an ad for the event by Brad Pitt, Cotter immediately signed up for the emails. He signed up and received a certificate, and so did approximately 1.4 million other space enthusiasts.

“Somewhere about a year or so ago, there popped up a video with Brad Pitt and another lady,” Cotter said. “They said it was getting down to get your name on the rover. They were putting a microchip on it that had names engraved on it and so that’s what’s going on there. So that was kind of cool, me being able to do that.”

It will be the first time there’s been any unmanned or test flights on another planet, Cotter said, and the event provides an opportunity for students to get involved and view the landing.

“One of the cool things about it is it’s designed a little bit differently than before, and this one has a helicopter,” Cotter said. “You can go online and see a ton of stuff about it. It will deploy and it’s set to fly around up there and it recharges itself. It’s kind of cool, and there’s a local connection over there. There’s a bunch of student things on there where students can get involved.”

Cotter said he views the landing as a breath of fresh air for the community. With political tensions and a pandemic at large, the event is a bright moment that he said he looks forward to.

“I keep up with it and my whole thing is that with this day and time, all of the tension, strife and carrying on, there’s going to be this really cool thing going on,” Cotter said. “At least if you are interested in science, and I think people who aren’t will still be interested. They will be able to hear sound from a planet for the first time, and I think it takes about 14 minutes to get a transmission up there since it’s so far away.”

To learn more about the rover landing, visit Mars.nasa.gov.