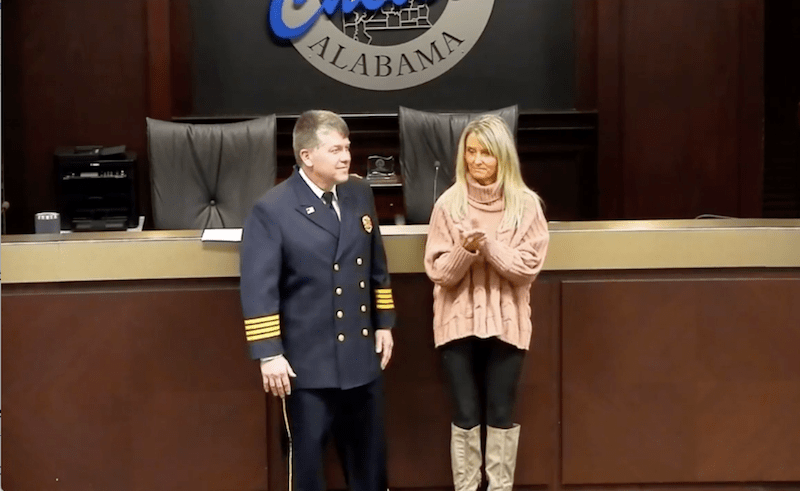 Chelsea Fire Chief Joe Lee is pictured with his wife, Shae, after his badge pinning at the Chelsea City Council meeting on Tuesday, Feb. 16. (Contributed)

CHELSEA – The Chelsea City Council meeting on Feb. 16 marked a special time for Chelsea Fire and Rescue Chief Joe Lee and his family.

Nearly six months after becoming the fire department’s interim chief, Lee was unanimously approved as fire chief, a role for which he expressed deep gratitude.

“I stood here in August when I was made interim chief, and I said I believe God had a plan, and I stand here now convinced that he does,” Lee said. “I would like to thank the mayor and this council for putting this trust in me. I realize what a prestigious honor this is, and I won’t take this responsibility lightly.”

“The sudden loss of our long-time fire chief was incredibly hard on all of us,” Mayor Tony Picklesimer said. “We all know from Wayne Shirley’s final act as chief of our department that it was his desire to follow him in this role.”

According to Picklesimer, the majority of the fire department’s staff requested Lee be appointed fire chief.

“Joe, I want to tell you from a personal standpoint, you have been a godsend to me,” Picklesimer said. “I am very grateful for you and the way that you have stepped up under very difficult circumstances. We’re extremely proud of you tonight.”

Lee thanked his family for their support and then praised his fellow firefighters for their teamwork.

“Everything we’ve done, we’ve done together,” Lee said. “I’m proud of every one of y’all. It wasn’t just me that stepped up; it was all of them.”

In other business, the City Council: