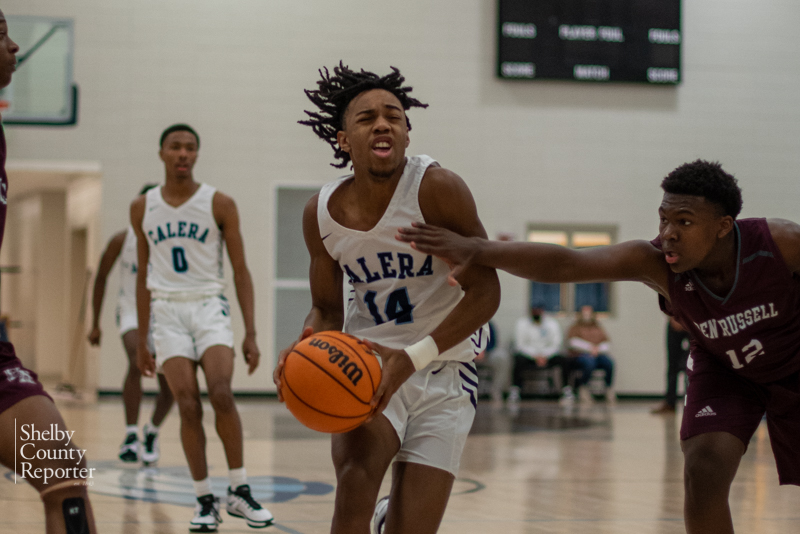 Xzayvion Childress, above, helped lead Calera to the Elite Eight with a 24-point performance against Saraland in a 70-57 Sweet-16 win. (Reporter photo/Keith McCoy)

SARALAND – For the second time in four years, the Calera Eagles are one of the final eight teams left standing in their classification after making school history on Friday, Feb. 19.

Thanks to outscoring Saraland 35-23 in the second half, Calera picked up a 70-57 win to advance to the Elite Eight in the 6A classification for the first time in school history.

While the Eagles made it to the regional final for the second time in the last four years, doing so back in 2016, they were a 5A team then and have since moved into the difficult 6A classification.

As they have done all year, the offense showed promise throughout the game, but the defense caused issues for the Spartans on their home floor.

In what was a two-point game at the break, Calera was able to turn up the defensive pressure throughout the second half, which led to transition basket opportunities, which is the Eagles’ bread and butter.

Many of the chances Calera got came through Xzayvion Childress who scored 15 points in the second half to help the Eagles ice the game down the stretch.

Childress also played a key role in Calera jumping out of the gate with a 22-point first quarter on the offensive end.

He knocked down a 3-pointer and had five points, while six different players scored in the opening quarter. Isaiah Green, who was building off a strong sub-regional game, came out and scored six points in the frame, while Jordan Eggleston added four and Keshawn Haynes went 3-4 at the free throw line.

But Saraland was a 20-plus win team this season that wasn’t going to go quietly. The Spartans were right on Calera’s heels with 19 points of their own in the quarter thanks in large part to Jarel Williams scoring nine points in the first quarter.

Surprisingly a defensive battle broke out in the second quarter when the two teams matched one another with 13 points apiece.

Calera, who is one of the most balanced teams in the state, relied on Duke Chambers, Eggleston and Childress for its 13 points in the frame, but no others scored.

Saraland also got points from just three different players, as both teams went into the half searching for a way to find answers for the opposing defense.

But with their 22-point opening quarter and the lead at the half, the Eagles came out ready to roll in the second half.

Already a loose and confident team, they got some early momentum and got back to their balanced ways.

Childress scored seven points in the quarter, but five total players scored, including four from Haynes and two each from Rod Smith, Green and Chambers.

Calera was also able to carry its defensive effort from the second quarter into the third, allowing 12 points in the period to give the Eagles a 52-47 lead going to the final frame.

At that point, the Eagles could sniff the Elite Eight, which gave them a jolt of energy in the final quarter.

Almost as fresh as they were to start the game due to the adrenaline, Calera’s defense hounded the Spartans and held them to 12 points for the second quarter in a row.

In addition to that, Childress closed out a strong night with eight more points in the final quarter, while Chambers added five and Eggleston four to put away the 13-point win and keep the season alive.

Childress led the way for Calera with 24 points, while Chambers added 14 and Eggleston 12. Green finished with nine points and Haynes was right behind with seven.