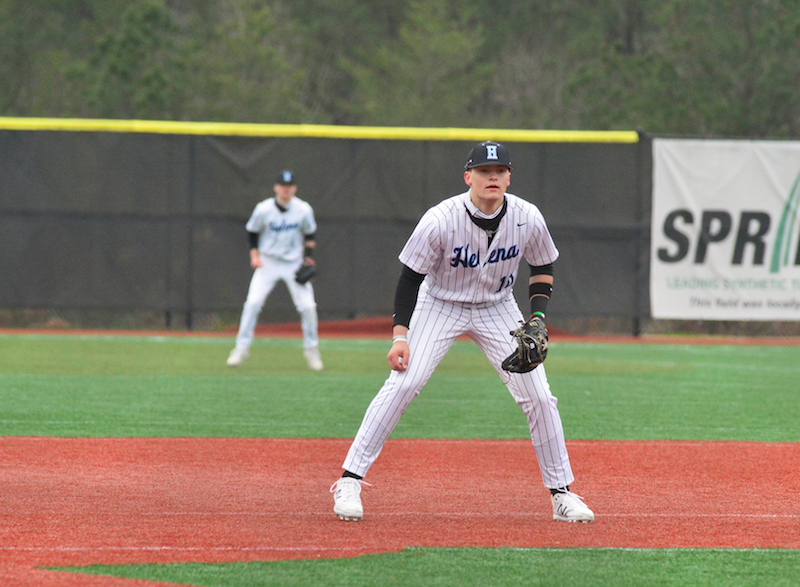 The Helena Huskies improved to 4-0 this season with wins against Tuscaloosa County and Huntsville by a combined 27-4 on Saturday, Feb. 20. (For the Reporter/Jeremy Raines)

HOOVER – The Helena baseball team continued a dominant start to the 2021 season with two wins on Saturday, Feb. 20 at Spain park High School.

Taking on two 7A classification teams Tuscaloosa County and Huntsville, the Huskies racked up a combined 27 runs to win both games and improve to 4-0 early in the season.

Helena took down Tuscaloosa County 12-2 and Huntsville 15-2 and has now outscored opponents 36-7 through four games.

In the first of the two games, the Huskies scored six runs in the bottom of the first to kick off the game and scored nine before Tuscaloosa County even got on the board.

Helena’s six-run first inning was boosted by a leadoff single from Brody Moss and an RBI double from Landon Leake to put a run on the board through the first two batters.

Following a walk from McGwire Turner and an error, Helena brought home its second run of the inning before the first out was recorded. Ryan Storey followed the out with an RBI single.

Following a walk, the Huskies added their final three runs of the inning on a fielder’s choice that ended with a run and back-to-back RBI singles from Noah Gwin and Moss.

Helena added to its lead in the bottom of the third after Storey, Griff Minor and Jack Freeman all three reached base to start the inning with either a single or a walk.

Gwin capitalized with an RBI single to make it 7-0. The Wildcats, however, got a big double play during the next at bat to help limit the damage in the inning, but the Huskies weren’t done yet.

Leake stepped to the plate and singled to left field to drive home two more runs and put Helena in front 9-0 through three innings.

Tuscaloosa County added one run in the fourth and one in the fifth to cut the deficit to seven runs, but that’s as close as the Wildcats got.

Helena scored one more in the fifth inning, and then completed the 10-run rule win in the bottom of the sixth with an RBI triple from Minor and an RBI double from Connor Martin.

The Huskies were led by Leake at the Plate thanks to a 2-for-4 performance featuring three RBIs, while Gwin added two hits and two RBIs. Storey and Minor each added two hits and one RBI. Moss added three hits and had one RBI with two runs scored.

Jacob Peters got the start on the mound and totaled three innings allowing two hits and no runs with two strikeouts. Preston Daugherty pitched one inning and added two strikeouts, while Colby Thacker finished off the game and struck out one while allowing no hits.

In the second game against Huntsville, Helena got off to even more dominant of a start thanks to 11 runs through the first two innings and 15 for the game.

Helena got off to a strong start by taking advantage of four walks in the top of the first. That, along with two singles, helped the Huskies score four runs in the first inning.

The top of the second saw the Huskies use their bats a bit more. A leadoff triple from Moss was a sign of what was to come in the frame, as he scored two batters later on an error.

A wild pitch allowed the 11th run to cross the plate later in the inning.

Helena made it 12-0 in the top of the fourth with a leadoff double from Martin, which was followed by an RBI single from Storey. Moss then made it 13-0 with a two-out RBI single later in the frame.

The Huskies capped the scoring with a two-RBI single from Connor Gibbs in the top of the fifth to complete an impressive 15-2 outing.

Moss, Martin, Storey and Minor all finished with two hits in the win with Storye and Minor posting three RBIs. Moss added an RBI, while Turner and Gibbs each had one hit with two RBIs.