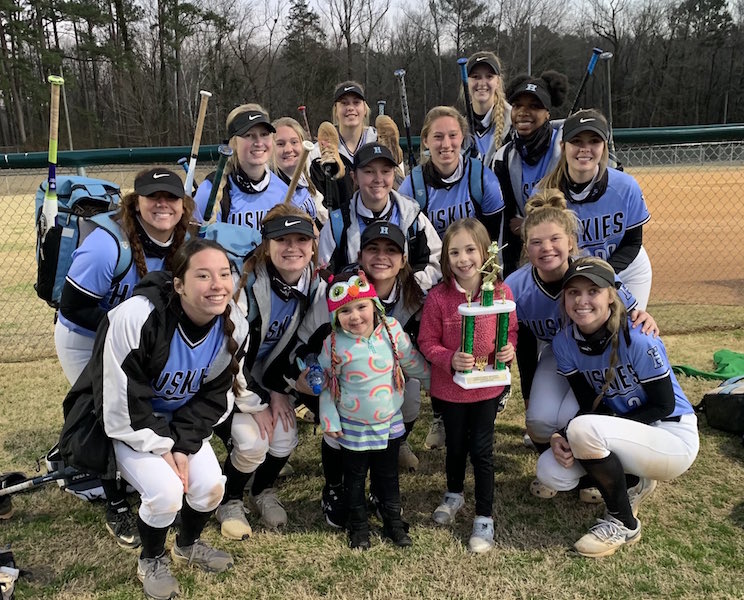 Helena’s softball team is off to a 6-0 start to the 2021 season. That impressive play early in the season was highlighted by winning the Leeds tournament on Saturday, Feb. 20, by taking down Class 7A power Spain Park. (Contributed)

LEEDS – A better start couldn’t have been drawn up for the Helena High School softball team this season after the Huskies won six games in three days to start the year 6-0.

That 6-0 start also included a 5-0 record at the Leeds Greenwave tournament in which the Huskies won the tournament championship over Class 7A powerhouse Spain Park.

That led to the championship game against the Jaguars, who have been one of Class 7A’s best teams the last several years.

But Helena is a favorite in the 6A classification this year, and that showed both in the circle and at the plate in the championship game.

The Huskies struck first in the game on a solo home run from Ann Marie Stanbridge, who battled back from a 0-2 count to create full count before fouling off four pitches in a row. But on the 11th pitch of the at bat, Stanbridge drove a ball deep to left field and over the wall for a 1-0 lead.

That was already enough for the win thanks to stellar performances from both Stanbridge and Cam Bailey in the circle.

Stanbridge got the start and matched her impressive play at the plate by tossing five innings and giving up just five hits and no runs to one of the state’s best offenses. She also added two strikeouts.

Bailey came in to finish off the final two innings by allowing one hit and striking out five.

Spain Park had some early chances after getting runners in scoring position in both the bottom of the second and third innings, but the Jags never did capitalize and didn’t have a runner reach second the rest of the game.

Helena added an insurance run with a two-out rally in the top of the fifth thanks to a hit batter and an error putting both Sara Ezekiel and Bella Holiday aboard.

Juju Wilkins then stepped to the plate and ripped a grounder up the middle to drive home Ezekiel and make it 2-0, which cemented the championship win.

In the opening win of the season, Helena gathered 13 hits in its 10-2 win against Chilton County and put together four runs in the top of the first to take early control. The Huskies added runs in the fifth, sixth and seventh innings to pull away.

Bailey pitched a complete game in the win and totaled 14 strikeouts. At the plate, Lexie Bullock and Haley Morris both had three hits with Bullock adding three RBIs and four runs scored. Morris posted two RBIs, while Stanbridge finished with two hits and on RBI.

In their first game of the Leeds tourney, the Huskies fell behind 1-0 in the top of the first but scored five unanswered between the third and fourth innings.

Stanbridge pitched a complete game and got the win thanks to four strikeouts and allowing just one hit.

Bailey led the way at the plate with three hits and one RBI, while Morris added two RBIs. Bullock, Stanbridge and Ezekiel all had two hits in the win.

Later that same night, Helena came back with a 9-2 win against St. Clair County thanks to scoring two in the first, five in the second and three in the third.

The Huskies were led by Bullock and Emma Bjornstad with three RBIS. Bullock had one hit, while Bjornstad finished 2-for-2 with two runs scored as well. Alex Erwin also added two hits and two runs.

Bullock also performed will in the circle, picking up the complete-game win and totaling seven strikeouts.

That was followed by a 9-0 shutout against Moody and a 10-1 win against Vestavia Hills on Saturday to earn a spot in the championship game.

In the Moody win, Bailey tossed a perfect game, allowing no walks, no hits and no runs while totaling seven strikeouts.

At the plate, Holiday went 3-for-3 with an RBI and two runs scored, while Stanbridge and Bailey each added two hits with three combined RBIs. Seven different players had RBIs in the win, while eight had hits.

Then, with a trip to the championship on the line, the Huskies scored 10 runs in two innings against 7A Vestavia Hills for a 10-1 win.

Bailey finished the game allowing two hits and one run with six strikeouts in the circle.