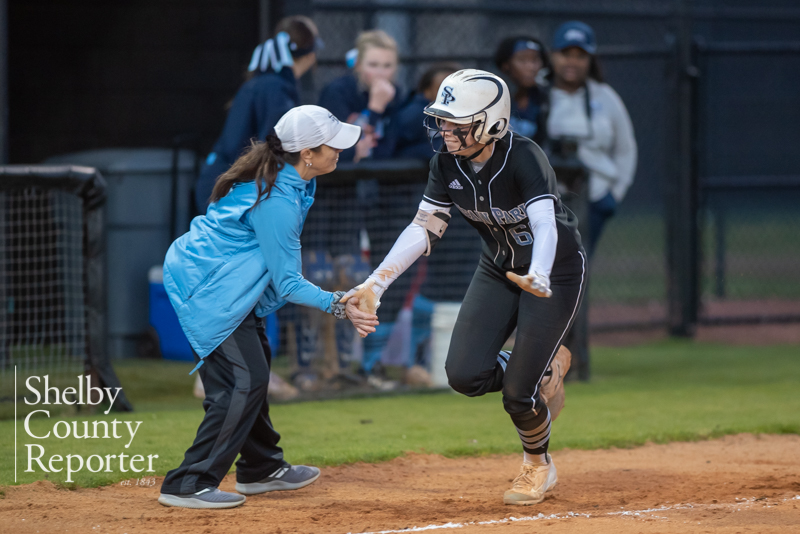 Spain Park softball head coach C.J. Hawkins has done a lot of winning in her 14 years leading the Jaguars, and on Friday, Feb. 19, the winningest softball coach in school history reached yet another milestone.

With a 5-0 shutout victory against the Oxford Yellow Jackets on the opening night of the Leeds softball tournament, Hawkins picked up her 900th win as a head coach.

In her time with the Jaguars, Hawkins has led the Jaguars to prominence across the state as one of the best teams. She has taken the Jags to five of the last six state tournaments with two appearances in the championship game and one additional appearance in the semifinals in that span.

And now, early in the 2021 season, Hawkins and the Jaguars seem primed for another run at a state tournament after a 5-2 start.

They got off to a rocky start in their opener with a 15-0 loss to Bob Jones, not picking up a hit in the game. But they have since bounced back with wins in five of their last six games.

That lone loss came to one of the best 6A teams in the state this year in the championship of the Leeds tournament on Saturday, Feb. 20, with a 2-0 loss to the Helena Huskies.

Between the two losses, however, Spain Park outscored Pike Road, Oxford, Clay-Chalkville and Mortimer Jordan by a combined 43-1 with four shutouts in the five-game stretch.

Against Pike Road, Spain Park got two runs in the first inning, five in the second and eight in the third to pick up its first win of the season.

In addition to the offense, senior leader Annabelle Widra tossed a perfect game in the circle. She went all three innings, allowing no hits, runs or walks while striking out every batter she faced.

Lydia Coleman led the way at the plate with a 2-for-2 game featuring four RBIs and three runs scored. In addition to that, Chloe Brittain came through with a grand slam to finish the game 1-for-2 with five RBIs thanks to a bases-loaded walk as well.

The Jaguars followed that with their first of two 5-0 shutouts against Oxford to kick off the Leeds tournament. Widra again had a strong outing by allowing just one hit and striking out 11 in another complete game.

Spain Park scored four in the second inning and one the fourth to finish off the game. Blakely Watts was the leader at the plate this time, going 2-for-2 with a home run, two RBIs and two runs scored. Widra finished 1-for-2 with two RBIs. Emma Hawkins finished 1-for-1 with one walk, one RBI and one run scored.

Later on the same night, the Jags came back with an 11-1 win against Clay-Chalkville that saw a dominant start.

Spain Park scored 11 runs in the bottom of the first inning to make easy work of the Cougars.

Ella Reed got the start in the circle this time, allowing one hit and one run with seven strikeouts in a complete-game effort.

Widra was the leader at the plate with a 1-for-2 showing with three RBIs and two runs scored. Brittain, Hawkins, Reed and Maggie Daniel all had hits in the game, while Brittain, Daniel and Reed each had one RBI.

A day later, the Jags came back and put up 10 hits in an 8-0 shutout against Mortimer Jordan. They scored three runs in each of the first two innings and added two in the third to complete the shutout.

Widra pitched the first three innings allowing just one hit and one walk with six strikeouts, while Reed closed the final inning with two strikeouts.

At the plate, Widra had a 3-for-3 game with three runs scored, while Blakley Watts went 2-for-3 with two RBIs and one run scored. Katie Flannery, Brittain and Morgan Jolley all had one hit and one RBI, while Hawkins added a hit and Daniel had one RBI.

Spain Park’s final win of the Leeds tournament came in another 5-0 effort against Oxford in the semifinals.

The Jaguars had five hits and five runs in the win, with all five runs coming in the bottom of the third in a tight game.

Reed got the win in the circle after allowing three hits and three walks but striking out four and not allowing a run.

Brittain and Jolley led the way at the plate with 1-for-2 performances featuring two RBIs.

Against Helena, Spain Park outhit the Huskies 5-4, but the Jaguars had three errors and left five runners on base to lose 2-0.