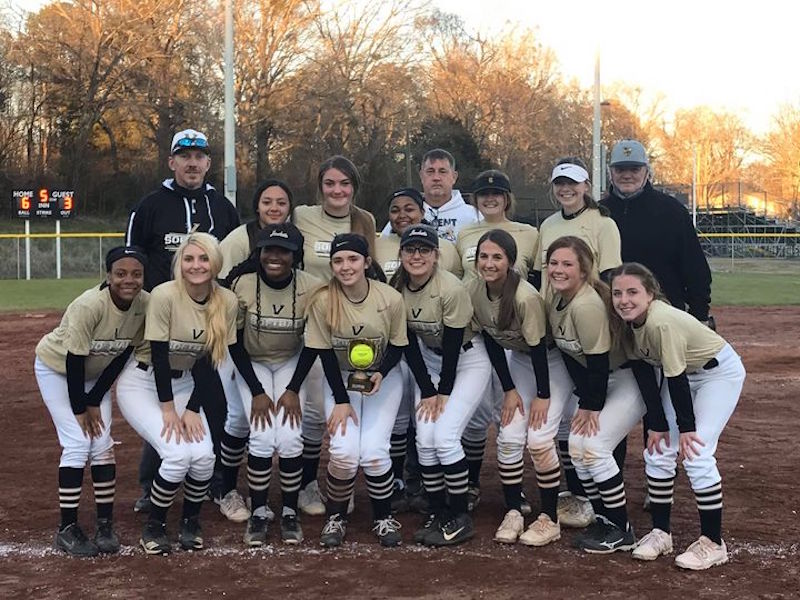 Vincent went 4-0 at its own tournament to claim the championship on Saturday, Feb. 20 and improve to 4-1 on the young season. (Contributed)

VINCENT – The Vincent Yellow Jackets completed a perfect 4-0 record in their own tournament between Friday, Feb. 19, and Saturday, Feb. 20, to claim the championship and improve to 4-1 so far this season.

The Jackets took down Childersburg 6-3, B.B. Comer 11-1 and Victory Christian 8-2 to earn a spot in the championship game against Childersburg for the second time.

And just like the day before, the Jackets picked up a 6-3 victory to take home the title.

It marked a strong four-game stretch for Vincent, who bounced back after losing its opener to 6A Calera 11-6.

After falling behind 2-0 in the top of the first inning, Vincent bounced back in the bottom half of the inning with four runs to take the lead, which the Jackets never relinquished from that point.

The four-run inning started when Jaci Wallace doubled with one out to quickly put a runner in scoring position.

After advancing to third on a passed ball, Wallace came home to score when Maddy Walker hit a fly ball to center field that ended with an error. That was followed by a walk to Lela Beck before Kayla Maxwell gave Vincent the lead with one swing of the bat.

She drove a fly ball deep to left field and over the wall for a three-run shot to make it 4-2 Vincent through one inning of play.

Vincent added two more in the bottom of the third with another big hit from Maxwell, who added an RBI double to her stat line, while Katie Vazquez followed with an RBI triple to make it 6-2 Vincent.

Childersburg attempted a two-out rally in the final inning, but only brought one run home, leading to the final score of 6-3.

Maxwell finished the game 2-for-2 with four RBIs and two runs scored, while Vazquez finished 1-for-2 with one RBI. Wallace had the team’s only other hit in the win.

Walker put together a complete-game win, allowing four hits and one earned run, while striking out seven.