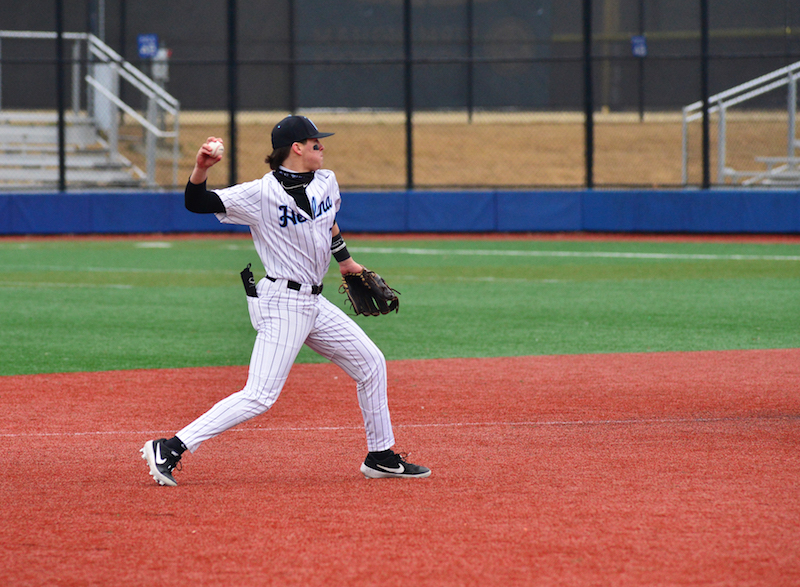 The Helena Huskies pulled off a 10-run win against Hoover on Feb. 23 to remain unbeaten this season. (For the Reporter/Jeremy Raines)

HELENA – With last year cut short, the Helena Huskies have been making up for lost time early in the 2021 season, and that continued with their most noteworthy win of the young season on Tuesday, Feb. 23.

Taking on state powerhouse and Class 7A Hoover, Helena didn’t just pick up a win against the Buccaneers but did so with the 10-run rule. The Huskies scored 13 runs through the first five innings, scoring runs in all but the first, while Hoover only managed three in that same span.

That led to a 13-3 win in five innings for Helena, who improved to 5-0 on the season and has won the last three in a row by at least 10 runs.

A big reason for the success continued to be Brody Moss in the leadoff spot. He finished the game 2-for-3 at the plate with a walk, four RBIs and one run scored in the win.

His first impact came in the bottom of the second inning after Hoover had taken an early 1-0 lead.

After a walk, a single and a bunt from Tyler Jon Santos, Ryan Storey and Logan Green loaded the bases, Griff Minor brought home the first run with a game-tying RBI single.

That’s when Moss stepped to the plate and cleared the bases with a three-RBI double to put Helena in front 4-1.

Hoover bounced back two runs in the top of the third to get within one, but that’s as close as the Bucs got the rest of the way.

Helena added one more in the bottom of the third before really taking command of the game an inning later.

With two outs and no runners on base, the Huskies started their two-out rally with an error and a walk putting two aboard.

A double from Landon Leake drove home Noah Gwin before an error on a ground ball from Miles Turner made it 7-3. Santos then continued an impressive season with a two-RBI double to center field that put the Husies in front 9-3.

Helena added two more runs due to mistakes from Hoover when a passed ball and a balk allowed the Huskies to take an 11-3 lead after four innings.

They closed the game out an inning later thanks to three consecutive singles to start the inning from Jack Freeman, Gwin and Moss. The latter of which drove home Freeman.

A sac fly from Leake then brought home the game-sealing 13th run in a 13-3 win.

In addition to Moss, Leake and Santos both had strong outings after going 1-for-2 with two RBIs. Helena had eight players pick up at least one hit in the game, while Minor added one RBI.