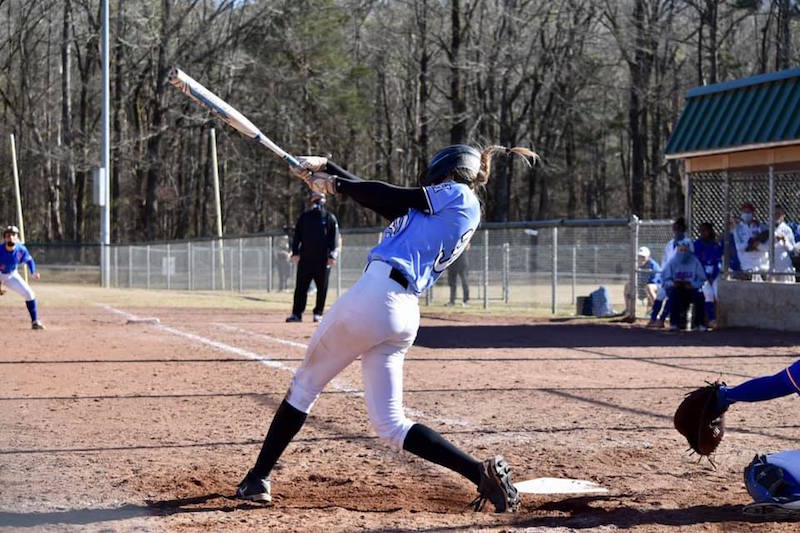 Helena’s Lexie Bullock finished 1-for-2 with an RBI and two walks in Helena’s win against defending 5A state champ Hayden on Tuesday, Feb. 23. (Contributed/Sandra Housey Bullock)

HELENA – Stepping to the plate in tie game as the leadoff hitter in the top of the final inning, Helena’s Alana Scott had one thought in mind—help her team win.

After falling behind in the count 0-2, Scott battled to a 2-2 count and on the sixth pitch of the bat, she blasted a ball deep to left field that cleared the wall for what became the game-winning hit in a 5-4 win for the Huskies.

With the win, Helena was able to remain undefeated so far this season after winning its opener against Chilton County before winning five games in a row at the Leeds tournament to win that championship.

The 5-4 win against Hayden was the latest in a strong start for the Huskies.

Even though Helena didn’t add any more runs in the top of the seventh, the confidence was high coming back out for the bottom half with how well  Cam Bailey was pitching.

Bailey finished off a complete game by going 1-2-3 in both the bottom of the sixth and seventh innings to preserve the win for Helena.

She finished the night with 12 strikeouts and allowed eight hits and four runs in her seven innings pitched, but found her rhythm when it mattered most.

More impressive, Bailey struck out the side in the sixth and struck out two of three in the seventh to finish on a high note.

The game’s excitement started in the top of the third when a bases-loaded walk brought home the first run of the game. That was followed by a double play, but another run crossed the plate to make it 2-0 Helena.

Hayden responded in the bottom half of the third with an RBI double to make it 2-1.

In the bottom of the fifth, Hayden was able to take its first and only lead of the game when an RBI single and an error brought home two runs.

The Huskies bounced back with a big two-out rally in the top of the sixth inning. It got started with a double from Emily Crowe and single from Bella Holiday in back-to-back at bats.

A walk to Juju Wilkins loaded the bases, before a second walk in a row to Lexie Bullock brought home the game-tying run.

Bailey’s pitching then got Helena to the top of the final inning with a chance to take the lead, which is when Scott made the difference with her leadoff home run.

Scott led the way with a 2-for-4 game and one RBI in the win. Crowe finished 3-for-3 with two runs scored and a walk, while Holiday and Ann Marie Stanbridge both finished with two hits.

Helena pulls 10-run rule against Hoover to improve to…