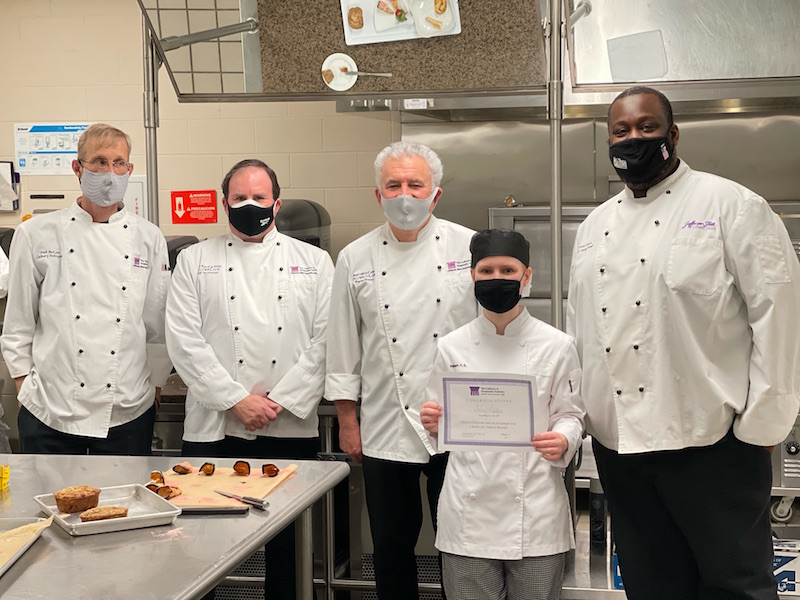 Students at Pelham High School were recently recognized for their ability in a culinary arts competition. (Contributed)

PELHAM — Avery Fuller and Ashlyn Johnson are both juniors at Pelham High School and both have a passion for the culinary arts, which has led them to excel and earn scholarships for their skills in cooking and baking.

At a regional competition hosted by FCCLA on Friday, Feb. 12, both students won in their respective categories competing against several other top culinary students from across the region.

Fuller competed in the Baking and Pastry Arts competition where she had to prepare three different baked food items to present for judging, which were a yeast bread, a quick bread and a cookie.

“I am currently in the baking and pastry class, and I just enjoy baking and making pastries,” Fuller said. “I felt very thankful and glad that the hard work paid off. I want to pursue a career in the culinary industry. It’s good to know that I can compete with others.”

With her achievement, Fuller was awarded a one semester full-time scholarship waiver, which will help offset costs when she goes to college, and she will now move on to the National FCCLA competition.

“This competition is a good opportunity for exposure in our programs,” she said. “I have competed in ProStart, which is a state and national team competition. Each person kind of does a component of the meal. I have never done anything like this as an individual before, it was a good experience for both of us to work independently.”

Johnson also participated in the competition, having entered into the Culinary Arts Category where she was asked to prepare four different food items incorporating Alabama based foods into her plate.

She presented a plate with a bed of McEwen & Son grits with bacon and pecans, baby collard greens, a peach-pickle chutney with dried cherries and pan-seared scallops.

According to Arceo, Johnson was originally a virtual student, but when she began to take the culinary classes, she jumped right in ready to work and become as good as she could possibly be.

“The thing with her that inspires me is that she came from being virtual to being a traditional student,” Arceo said.  “She said ‘I want to do this, I want to compete, please train me.’ For someone with no background experience, she knocked it out of the park.”

Johnson will also go on to the National FCCLA competition to compete later this year.

Both students hope to incorporate their love of cooking and baking into the career paths they choose to pursue after high school.