Sewing a ministry to Morrison 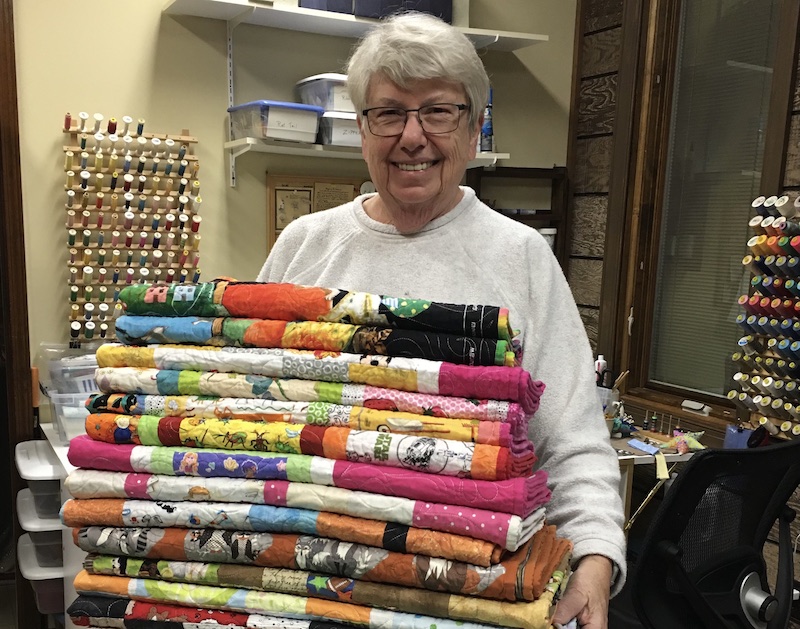 Duffy Morrison started sewing for her family but later on she used it to help others. (Contributed)

“I consider it a ministry,” said 79-year-old Duffy Morrison, referring to sharing her sewing skills. Describing her sewing career as an “evolution,” she has used it to help hundreds. A stay-at-home mother of two daughters, Duffy learned to sew when she became pregnant.

“I got into sewing for practical reasons-sewing for my daughters and myself,” she said.

In the late ’70s, she became a dressmaker for a fabric store in Homewood named Virginia’s. Duffy moved on to projects for Southern Living. Morrison’s Christmas tree skirts, stockings and other craft creations were featured in the annual publication of Southern Living’s book. Her talent provided a means to generate an income. Afterwards she made drapes, Roman shades, decorative pillows, table skirts and more for Sarah Jerringan Designs.

She then became involved with quilting.

“I was intrigued with the process of quilting. It was still sewing–but such a creative outlet. It’s an acquired skill where the more you do it, the better you become at it. I quilt for the love of it,” Duffy said.

She uses her love of quilting to spread love to children through the Quilts for Kids, an organization dedicated to transforming fabrics into patchwork quilts to comfort children facing serious illness, trauma, abuse and natural disasters. Duffy has made approximately 150 quilts since joining in 2010.

Through her acquaintance with Quilts for Kids members Agnes Poole and Shelia Gallups Morrison, she became involved with making masks for RSVP. Duffy has donated the majority of the 600 masks she has made so far to RSVP. A fan of Charles Schulz’s comic strip Charlie Brown’s Peanuts, Duffy’s specialty is masks created from fabric featuring the comic strip characters.

She is an active member of Resurrection Catholic Church in Clanton and Core Leader in Community Bible Study (CBS) an international Bible study program. The 15-member class convenes through Zoom video conference; sessions are held weekly and run for an hour. Trained teachers highlight and illustrate the central idea of Bible passages and their application in the participants’ lives. CBS offers a study program for adults, adolescents and children.

A native of Cincinnati, Ohio, Duffy was raised in the small town of Ft. Atkinson, Wisconsin along with her three older siblings. She has been married to Ron for 57 years. The couple basks in the joy of their two daughters and four grandchildren. Duffy graduated from Marquette University in Milwaukee, Wisconsin in 1964 where she earned her B.S. in Medical Technology.

Duffy joined our RSVP family this year. She is a hard worker and dedicated to serving her fellowman. We are delighted about her decision to become a part of our family of volunteers.