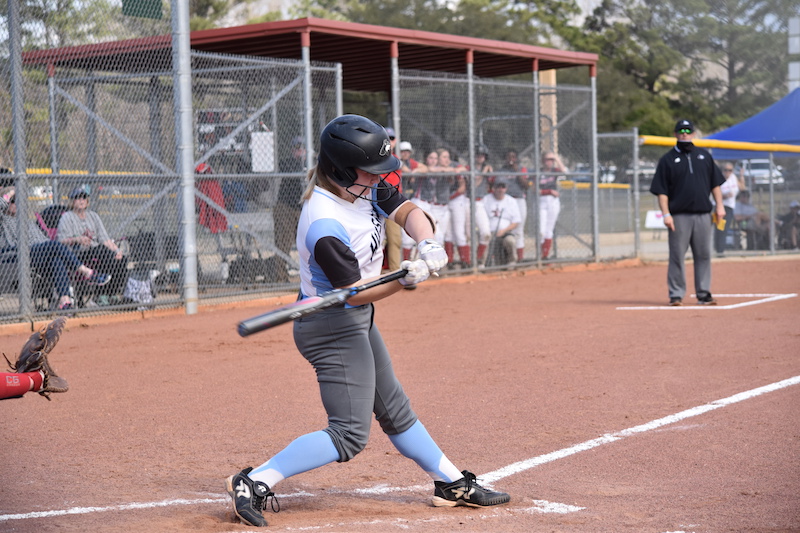 Helena’s softball team picked up three more wins at the Lady Patriot Classic to improve to 11-1 on the season. (For the Reporter/Sandra Bullock)

Despite the Lady Patriot Classic bringing Helena’s first loss of the 2021 softball season, the Huskies continued an impressive stretch with three more wins by a combined 25-4.

They went on to lose their first game of the season to Thompson by a score of 6-1 to cut the tournament short of a second championship win in as many weekends, but were close yet again.

It also followed a 9-6 win against Corner the day before the tournament started.

But in the opening round of the Lady Patriot Classic, Helena couldn’t have asked for a better start.

The Huskies scored three runs in the first, eight in the second and five in the third to take down Holy Spirit 16-0 in three innings.

Cam Bailey and Ann Marie Stanbridge combined for a no hitter and seven strikeouts in three innings pitching.

At the plate, Grayson Barnett went 2-for-3 with three RBIs and one run scored to lead the way. Bailey, Elise Dufour and Alex Erwin all added one hit and two RBIs, while Lexie Bullock and Sara Ezekiel each had one hit with one RBI. Alana Scott also added an RBI in the win.

The next game featured a bit more of a challenge, but Helena got off to a strong start with four runs through the first two innings, which helped the Huskies grab an early 4-1 lead.

Taking on Curry, the deficit was cut to two runs in the top of the third, but Helena answered back in the bottom of the third with an insurance run.

The Huskies then got out of a jam in the top of the fourth when Stanbridge struck out the final batter with two runners on to complete a 5-3 win.

Scott and Haley Morris led the way at the plate with 1-for-2 games featuring an RBI and one run scored from each.

Emily Crowe, Juju Wilkins and Ezekiel each added a hit, while Stanbridge and Bailey added one RBI apiece.

Helena then came back early Saturday morning, Feb. 27, to pick up one final win.

From there, Helena coasted to a 4-1 win on the arm of Bailey, who went the distance allowing three hits, one run and eight strikeouts in the 4-1 victory.

Scott and Stanbridge both had two hits in the win, while Scott added an RBI. Bullock, Crowe and Dufour all had RBIs in the win as well.

That led to the matchup against Thompson, which Helena lost 6-1. The Huskies gave up five runs in the top of the first and only scored one in the bottom half on an RBI single from Bullock.