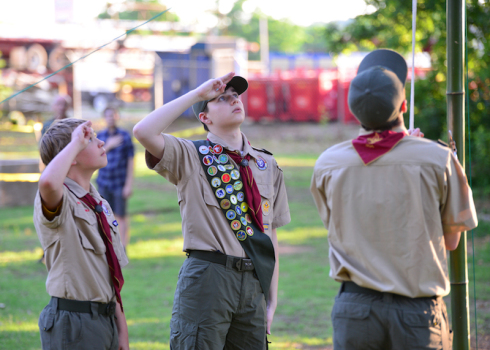 Conner McDonald with Pelham Troop 404 is installing a flag pole for the Pelham Senior Center as his Eagle Scout project. (File)

PELHAM — Conner McDonald is currently working toward his Eagle project as a member of Pelham Troop 404, which will see him help construct and install a flagpole at the Pelham Senior Center.

McDonald said that he picked this project after talking with Barry Blount from the Matthew Blount American Legion Post 555, who had talked with the troop about how important having this at the center would be for local veterans and the group.

“Barry Blount contacted my troop, Troop 404, and expressed that they wanted to install a flagpole there so that they can have some of their ceremonies for veterans that have died and for meetings in the summer time,” McDonald explained. “In talking with Mr. Blount, I felt like it would impact him on a personal level and for the American Legion as well.”

McDonald is currently raising funds and trying to reach out to local companies who can assist with the construction so that he can begin working on the project in the next few months.

“The two largest costs are the construction of the base of the flagpole and the flagpole itself. I am trying to raise funds for the pole first, and then get with a company to come out and dig a spot where the flagpole is going to go,” McDonald explained.

He expressed that he has received a very positive response from those who he has contacted about the project and hopes that by completing the flagpole he will be able to demonstrate the importance of community in the city.

“I hope that people are able to see how the community of Pelham and all of the people who live there are able to help each other as a community,” he said. “What we are trying to do as a troop is be a part of the community.”

McDonald is currently raising money through a GoFundMe campaign to help pay for expenses related to constructing the flagpole, which can be found at Gofund.me/18b4efa9.

“A lot of people in my troop have helped and offered help for when I actually do the project,” he said. “Also, the American Legion let me come to one of their meetings and collect donations. I was able to give a speech at the meeting about what it meant for me and why I wanted to do it.”