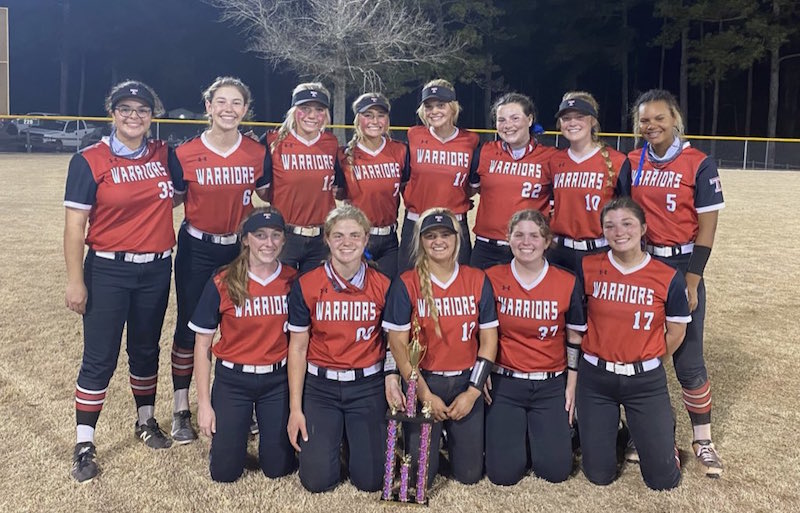 ALABASTER – The Thompson softball team has reeled off eight games in a row, including six in a row at the Lady Patriot Classic over the weekend, to improve to 10-1 and win their first tournament of the 2021 season.

The Warriors outscored opponents 39-17 in the tournament to complete a perfect 6-0 showing and win the championship.

That followed up wins of 6-4 against Moody, 12-1 against Pleasant Grove, 6-2 against Calera and 9-0 against Mortimer Jordan to open the season with their lone loss coming in a 2-0 matchup against Vestavia Hills on Feb. 20.

Thompson opened the tournament on Friday, Feb. 27, with a 4-2 win against Gordo and followed that with a 5-2 win against Northside to head into Saturday with a 2-0 record.

The next morning, however, the Warriors took on a difficult Curry team and were challenged.

In what became the first of two matchups between the two during the day, Thompson jumped out to a 4-0 lead through the first two innings, but Curry responded with a four-run inning in the top of the fourth to tie the game.

After a quiet fifth inning, Curry came right back with six more runs in the top of the sixth to take a 10-4 lead in what looked to be a game-changing moment.

The Warriors, needing six to tie and seven to win, responded in the bottom of the sixth in clutch fashion.

With a runner placed on second due to the extra innings, Thompson led off with a single from Savannah Nabors to put runners on the corners with no outs.

Then, with one swing of the bat, Dailynn Motes made it a three-run game with her three-run shot over the center-field wall.

Jenna Williams followed that with a double to start the threat right back.

But following a fly out, a walk and a pop out, Thompson was down to its final out with two runners aboard.

Curry still needed just one more out to remain tied, but after a walk to Nabors, Kaylee Cannon stepped to the plate with two runners in scoring position and ripped a line drive to right field to bring Cook home for the 11-10 walk-off win.

Thompson then went on to beat Helena in its first elimination game shortly after with a 6-1 victory that was highlighted by pitcher Eleanor DeBlock allowing just four hits and one run with five strikeouts.

The loss for the Huskies marked their first of the season, while Thompson remained alive in the tournament.

Thompson then took down Northside 8-2 to earn a trip to the championship game where the Warriors were set to meet Curry again.

This time around, however, DeBlock was ready to roll.

She stepped back in the circle and allowed just three hits, while she struck out three to get through the game in 54 pitches and unscathed in the score column.

With her impressive pitching, the offense wasn’t as forced to score runs quickly.

An inning later, Thompson closed the game with three more runs when a hit batter, a wild pitch and a sac fly from Pate closed out the scoring for a 5-0 championship win.

In the championship, Pate went 2-for-2 with three RBIs, while Motes, Williams, Cook and Madison Poplin all had hits. DeBlock also added two walks at the plate.