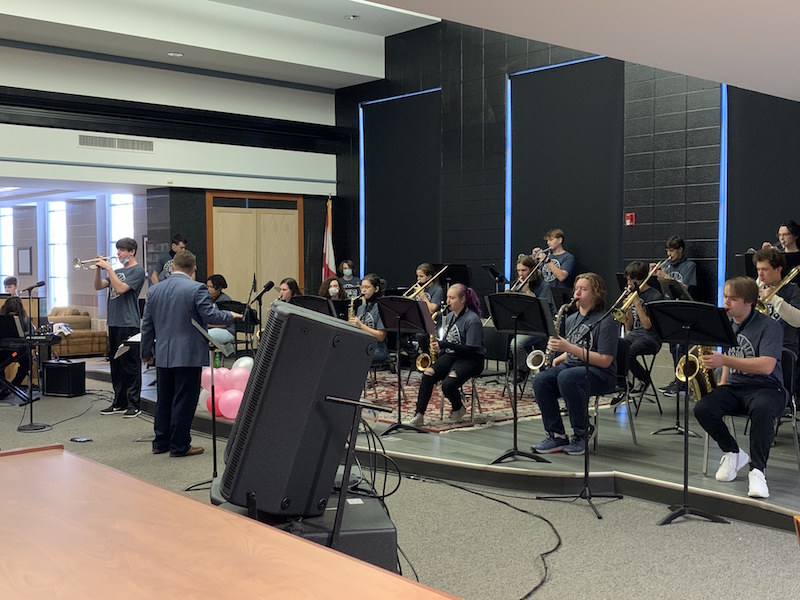 The band played a variety of well-known songs, including “It Don’t Mean a Thing” and “I’ve Got You Under My Skin,” with several pieces featuring student vocalists.

A limited number of guests were allowed inside the library to watch the performance, which was also livestreamed via the school’s Facebook page.

“I was very pleased with what the students were able to do,” SPHS Band Director Chris Neugent said. “It’s been a year of challenges for everyone. For them to be able to prepare a 30-minute concert of excellent big-band music that reflected lots of different time periods and highlighted the influence and effects African American bandleaders and composers had on our nation was awesome.”

Neugent said students had been working on the songs since school resumed after winter break, but the district’s staggered schedule until Jan. 19 meant students could not begin rehearsing as one group until about two weeks before the performance.

“It’s been a challenge, but I’ve been very proud of the students and how they have dealt with all of the difficulties with the global pandemic,” Neugent said.

In a normal school year, the jazz band would have performed at various places in the community nearly a dozen times already, but the pandemic has limited those opportunities, Neugent said.

“The students love to perform,” he said, adding the band plays at the Hoover Senior Center and local nursing homes regularly. “We’re always looking for opportunities to share America’s music, jazz, with the city of Hoover and its residents.”

To follow updates from the Shades of Blue Jazz Band, visit Spainparkband.org.