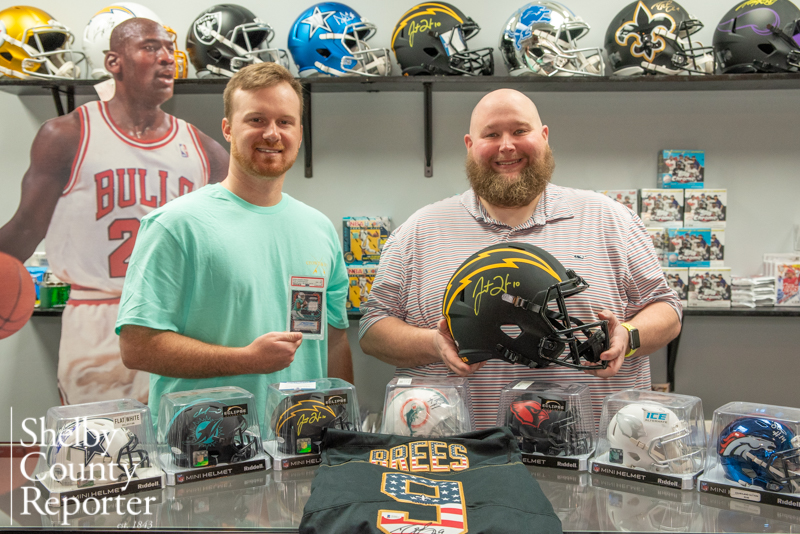 CHELSEA – Chelsea resident Chris Monroe remembers frequenting a sports card shop in the Huffman area when he was a child, constantly looking for an exciting find to add to his collection. That was nearly 30 years ago, but Monroe, who turned 38 this year, still thrives on the thrill of the hunt.

Monroe recently took his hobby to the next level when he and fellow card collector Kevin Rentfrow, who works with Monroe in the insurance business, opened Rivalry Sports Cards and Collectibles in Chelsea in January.

“In August of last year, I opened my own Farmers Insurance agency in Pelham,” Monroe said. “Kevin and I have always been into collecting cards. We saw the market explode during the pandemic, and we wanted to open up a shop. We sell insurance together and run a sports card shop together.”

At their store, Monroe and Rentfrow sell graded and non-graded cards individually, in packs and in boxes, along with card supplies, sports memorabilia and Pokemon items.

“Graded” means a card has been evaluated and given a grade by a company, such as Professional Sports Authenticator (PSA), based on its physical condition. A high grade can increase the overall value of a card, Monroe said.

In his personal collection, Monroe’s most prized graded cards include a Mike Trout rookie card, a LeBron James rookie card and a Kobe Bryant rookie card.

Among the most notable items for sale at Rivalry Sports are a 1986 Michael Jordan rookie card of high value and a one-of-a-kind Tua Tagovailoa patch autograph card, which includes a piece of material from one of his game jerseys.

Monroe and Rentfrow order cards from different manufacturers, but they also buy and trade with other sellers and customers.

“We buy collections off people,” Monroe said. “We can (look at) a person’s collection and offer a price to buy it. That’s probably the most fun part of being a brick-and-mortar store – seeing people’s collections. A lot of people don’t know what they have. Sometimes, it’s gold.”

But beyond the cards and collectibles themselves, Monroe and Rentfrow enjoy seeing other children’s enthusiasm for a hobby they say is making a comeback, perhaps due in part to the pandemic.

“The coolest part of opening for us is to see kids come in the shop,” Monroe said. “It reminds me of how it was when I was a child. They’re the next generation of collectors, so we really want them. It’s only going to survive if we get them interested again.”

Rivalry Sports Cards and Collectibles is located at 109 Foothills Parkway Suite 110 in Chelsea.

The store is open Tuesday-Saturday 10 a.m.-6 p.m. and is closed Sunday and Monday.

For more information, visit @RivalrySportsCards on Facebook and online at Rivalrysportscollectibles.com.