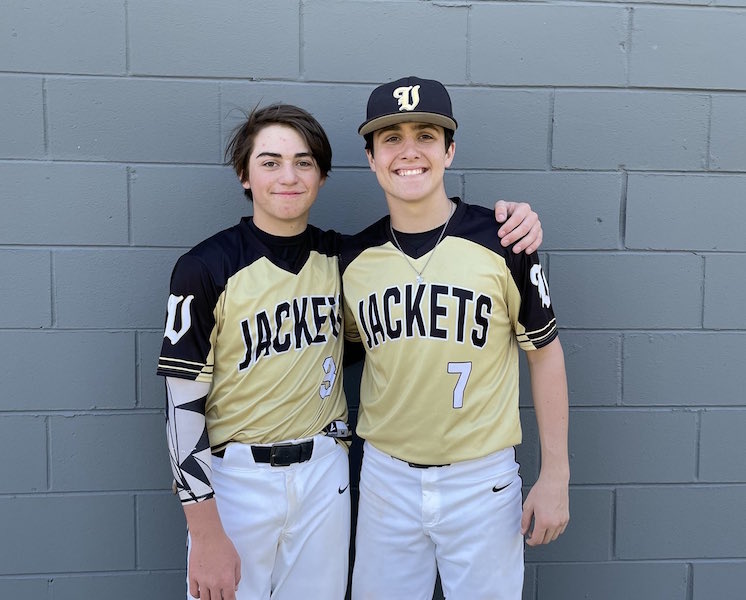 Aiden Poe, right, threw his first varsity no-hitter for the Vincent Yellow Jackets in a 10-0 win against Victory Christian on March 6, while also striking out 12 batters. (Contributed)

VINCENT – An eighth grader at Vincent Middle High School, Aiden Poe took to the mound for the Yellow Jackets on Saturday, March 6, and put together a flawless performance against Victory Christian on his home field.

While the Jackets put together an offensive spark featuring nine hits and 10 runs in five innings to pick up a 10-0 mercy-rule victory, it was Poe’s performance on the mound that was jaw-dropping.

The eight grader went the distance and earned a no-hitter in the win, while striking out 12 of the 18 batters he faced. If it weren’t for an error, two walks and a batter reaching on a dropped third strike, he would have finished with a perfect game.

In addition to his performance on the mound, the Yellow Jackets scored four runs in the bottom half of the opening inning to take an early lead in the game and give the young pitcher some breathing room on the mound.

That was followed by a single from Zack Carlisle. Up 2-0, Carlisle added another run when he stole second and then scored after two passed balls brought him home.

Fields advanced to third on another passed ball before an error during Hueston Schiller’s grounder to third allowed Fields to come home for a 4-0 lead.

After a quiet second and top of the third, Carlisle led off the bottom of the third with a triple before Zack Wright singled to left field to make it 5-0 Jackets.

The scoring quieted down after that until the bottom of the fifth, when the Yellow Jackets decided to finish the game with a 10-run-rule win.

Vincent got a single from Carlisle to lead off the inning, which quickly turned into a run on a double from Wright. Following a walk to Dawson Davis, a ground out led to Wright scoring and Davis advancing to second.

A single from Schiller made it 8-0, before a walk to Hunter Burnette put another runner aboard. That was followed by a single from Cole Gowers, who drove home the ninth run of the game for the Yellow Jackets.

Down to their final out of the inning, the Jackets finished the game off when an error on a fly ball from Davis allowed Burnette to score the game’s 10th run for the 10-0 win.