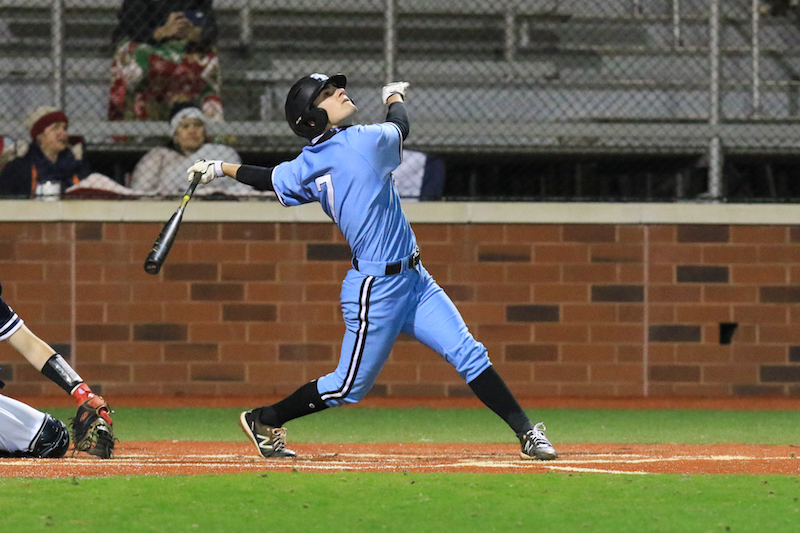 TUSCALOOSA – In a back-and-forth game that took two extra innings to decide, the Spain Park Jaguars grabbed a victory on Tuesday, March 9 after outlasting Tuscaloosa County 8-7 in a nine-inning game.

After taking the lead in the first extra inning, 7-6, but Tuscaloosa County came right back to tie the game 7-7 in the bottom half of the eighth. In the ninth, however, the Jags took the lead again in the top half when Ryan Cole scored on an error by the Tuscaloosa County right fielder.

That put the Jaguars in front 8-7, and this time, the Jags determined they didn’t want the game to surpass nine innings. In the bottom half, Hayden Humber closed out a strong outing on the mound with two strikeouts sandwiched around a single, followed by a lineout to help the Jaguars pick up the extra-inning win.

Spain Park started the game how it ended when Connor Eberhardt scored on an error on a pop fly by Cole.

That gave the Jags an early 1-0 lead, but Tuscaloosa County was ready to respond on its home field.

The Wildcats scored two runs in the bottom half of the first to take their first lead and followed that with three more in the bottom of the second after a 1-2-3 top half.

That put Tuscaloosa County in front 5-1, but the Jaguars responded with a two-out rally in the top of the third.

A leadoff walk put Wilkins Hunter aboard early in the inning. Following a line out and pop out, an error allowed Trent Thompson to reach safely and put two runners on base.

That was followed by a double from Cole to drive both runners home before a passed ball during Michael Glick’s at bat allowed Spain Park’s fourth run to cross the plate.

The scoring quieted down for a brief moment after that, but Spain Park came right back in the top of the fifth with an RBI single from Thompson to tie the game at 5-5.

The Jaguars then regained the lead for the first time since the top of the first when Josh Harrington was able to score on a wild pitch.

But the Wildcats fully accepted the back-and-forth game and responded with an RBI double in the bottom of the sixth to even the game again.

Neither team scored in the seventh, which led to extra innings. Both then scored in the eighth before Spain Park was able to end it in the ninth.

Despite being outhit 10-6, the Jags committed two less errors and only left eight on base compared to the Wildcats leaving 14 on base.

Spain Park was led by Humber on the mound. He allowed five hits and one run with five strikeouts in three innings of work.