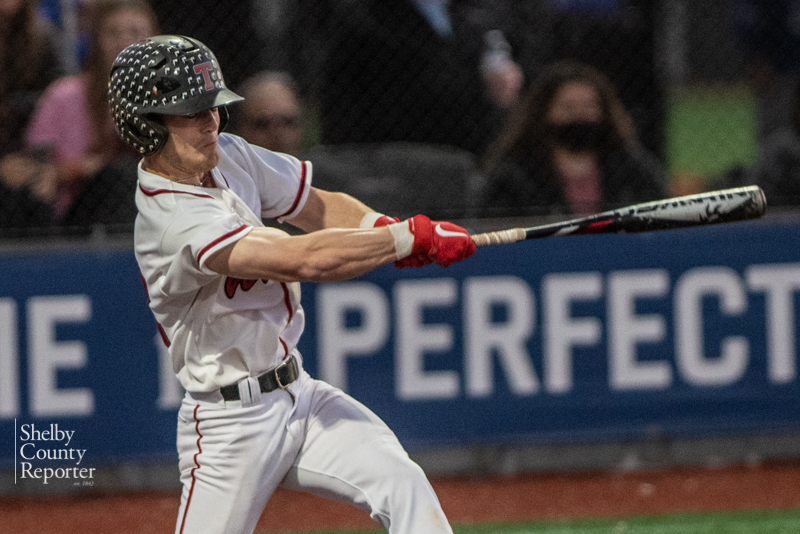 The Thompson Warriors had no hits going into the bottom of the sixth inning against Calera but were able to get rid of the rust and score three runs for a 3-2 win against the Eagles on March 9. (Reporter photo/Keith McCoy)

ALABASTER – Despite struggling at the plate for five innings, Thompson was able to overcome no hits during that span to pull off a thrilling comeback win against county foe Calera on Tuesday, March 9.

Calera’s Matthew Bullard took a no-hitter into the bottom of the sixth inning as well as a 2-0 lead after a flawless start to the game.

But after allowing a walk to pinch-hitter Major Paraca and a double to Trey Puckett to start the bottom of the sixth inning, Bullard was pulled with runners on second and third and no outs.

Following the pitching change, an error and a wild pitch allowed both of those players to cross the plate and quickly tie the game at 2-2.

A fielder’s choice then put runners on the corners with no outs before Connor Gregory singled to left field to bring home what became the game-winning run.

Now trailing 3-2, Noah Clayton settled in on the mound and showed the potential he and Bullard both bring to the table as he struck out the final three batters of the inning to give the Eagles 14 combined strikeouts in the game.

But Thompson had a closer of its own ready to showcase his talent as well.

Cade Watts entered the game in the top of the seventh with the Warriors now in front.

Watts stepped in and left no doubt by striking out the side to complete the 3-2 comeback victory.

Calera was able to grab an early lead with a two-out rally in the top of the third when Carter Sheehan, Riley Gay, Matthew Windham and Bentley Berry had four consecutive singles.

The later of two from Windham and Berry each drove home one run to give the Eagles a 2-0 advantage.

Bullard then went on to post seven strikeouts over the next three innings to help Calera maintain the lead, but Thompson’s bats couldn’t be bottled up the entire night.

Calera was led by Gay and Windham with two hits apiece, while Windham added an RBI. Sheehan, Bailey and Bullard each added one hit in the game.

Braxton Turnbow got the start for the Warriors and allowed seven hits and two runs while striking out nine batters. Watts followed by getting through the seventh with three strikeouts.