By JOYANNA LOVE and SCOTT MIMS / For the Reporter

Brandon Marnez Gardner, 35, has been arrested on car theft related charges following a multiple agency pursuit though Chilton and Shelby counties. He is in the Chilton County Jail on charges of robbery (street gun), auto theft, buying/receiving stolen property and attempting to elude. 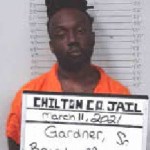 Around 8:30 a.m. on Thursday, March 11, Gardner was driving on Bell Lane Road outside Clanton and reportedly rear-ended the car in front of him.

“(Gardner) bumped her (the victim’s car) from the back end,” Chilton County Sheriff John Shearon said. “When she got out, he produced a hand gun and said, ‘I’m taking your car.’”

Gardener headed north. One mile into Calera, spikes were put on the roadway in an attempt to stop the suspect. Shearon said spikes did take out some of the tires, but the suspect continued to drive into Pelham until all the tires gave out.  Afterwards, he got out of the car and started running. He was then arrested by law enforcement.

In addition to the Chilton County Sheriff’s Office, police departments from Pelham, Alabaster, Calera, Jemison, Thorsby and Clanton were also involved in the pursuit and arrest.

“When a violent crime has been committed and the armed suspect flees, it is the responsibility of law enforcement to do everything in our power to catch the suspect as quickly and safely as possible to protect potential victims,” said Calera Police Chief David Hyche. “A suspect who shows no concern or regard for others while operating a motor vehicle or armed with a firearm forces us to make difficult decisions in a split second.”

Hyche added that their prayers are with the carjacking victim and their family.

“We were simply assisting other agencies that were requesting help, and fortunately we were able to stop the suspect right at our jurisdiction border with the city of Alabaster,” said Ainsley Allison, Pelham P.D. communications manager. “Partnerships between law enforcement agencies are vital, and we are always happy to provide assistance when requested.”

Added Allison, “The Individual was endangering not only himself but also the welfare of others this morning.”

The Alabaster Police Department also posted a report of the incident on its Facebook Page: “APD assisted agencies from Chilton County with a pursuit that entered into our city limits. The suspect has been taken into custody,” the post stated.

“We thank all agencies that assisted and Chilton County (911) Communications for getting everyone notified,” Shearon said.

The vehicle that Gardner was driving before he bumped into the victim’s car is suspected to be stolen from Birmingham, Shearon said. The investigation is ongoing.