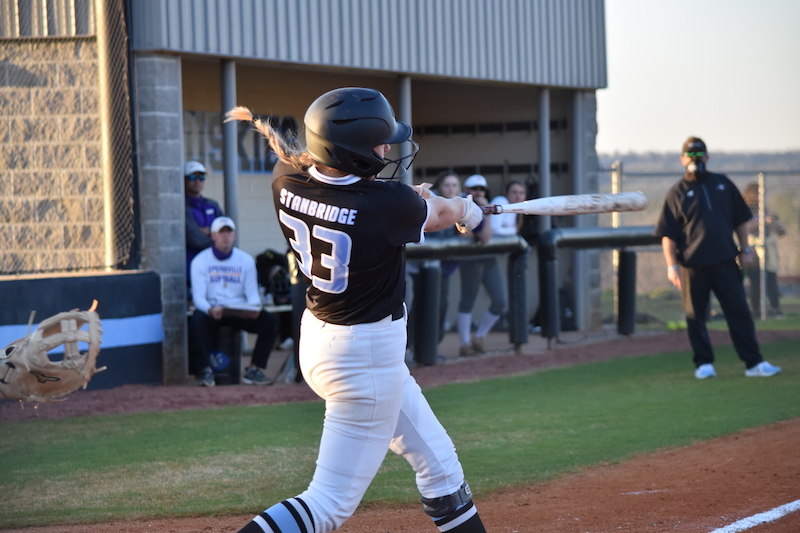 Ann Marie Stanbridge led Helena at the plate with a 3-for-4 performance in the extra-inning win against area foe Calera on Tuesday, March 9. (For the Reporter/Sandra Bullock)

CALERA – Following seven scoreless innings between area foes Helena and Calera on Tuesday, March 9, the two teams were forced into extra innings to determine who would pick up an area victory.

Neither team had found much of a rhythm through the first seven innings with a combined nine baserunners left stranded in scoring position. Both teams put together clutch double plays or got out of jams late in the game.

Calera had runners on second and third with one out in the bottom of the fifth but couldn’t bring home a run, while Helena left the bases loaded in the top of the seventh after Ann Marie Stanbridge was out on a double play after attempting to tag up and sprint home for the game’s first run.

After a 1-2-3 inning in the bottom of the seventh for Calera, Helena came back to the plate confident for the first time in the game after just missing a chance an inning earlier.

This time, the Huskies didn’t make the same mistake.

An error allowed pinch hitter Haley Morris to reach base safely on a ground ball to third base.

Following a pop out, Lexie Bullock and Bella Holiday were both walked to load the bases once again for Helena.

Then, back-to-back singles from Stanbridge and Elise Dufour finally ended the scoring drought by bringing home a combined three runs between the two.

Cam Bailey then added one last insurance run with a ground out to third base that allowed Stanbridge to come home and give the Huskies a 4-0 lead.

From there, it was turned over to Bailey in the circle to finish off the game, and she did just that.

Bailey capped off a special combined outing from herself and Bullock by striking out the side in the bottom of the eighth to give Helena the 4-0 win.

She pitched 3 2/3 innings of no-hit ball with eight strikeouts in that span. Bullock, who got the start, pitched 4 1/3 innings and allowed just one hit and three walks while striking out three of her own.

At the plate, Stanbridge led the way with a 3-for-4 game featuring one RBI and one run scored. Dufour was just behind with a 2-for-3 performance featuring two RBIs. Bullock also went 2-for-3 with a run scored, while Juju Wilkins added one hit.

Madison Holtzapfel pitched all eight innings for the Eagles and only two of the four runs she gave up were earned in a strong outing.

Payton McDonald and Kayla Butler picked up the only hits for the Eagles.