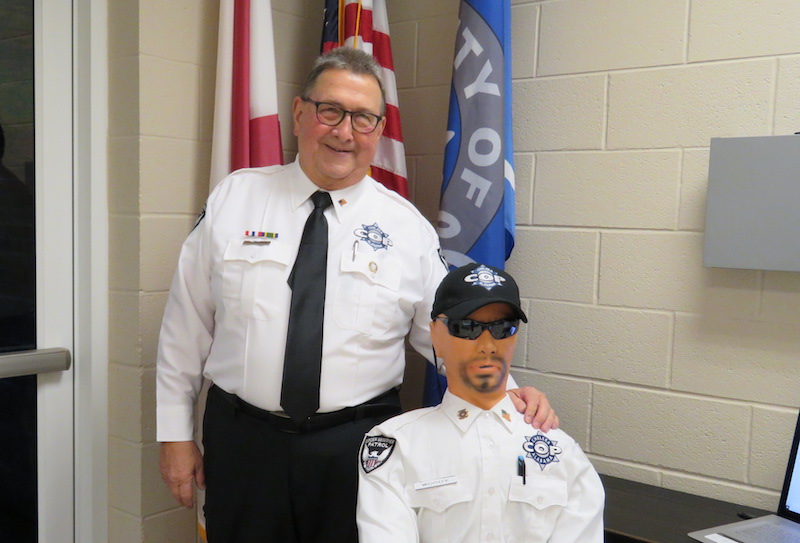 Started in December 1998, C.O.P. is an all-volunteer organization sponsored by the city of Chelsea, the Shelby County Sheriff’s Office and Chelsea Fire and Rescue. It is composed of Chelsea citizens who, after extensive training before receiving certification, go on patrol in neighborhoods and business areas in Chelsea to help deter crime and assist in emergencies such as auto accidents, traffic control and storm damage surveillance.

Approximately 37 uniformed C.O.P. volunteers patrol the city. Officers can be identified by their white shirts with the C.O.P. insignia and their available photo I.D. cards. These volunteers have received extensive training before receiving certification and going on patrol. Volunteers patrol in teams of two. Each member commits to donate a minimum of three hours per week for patrols.

The C.O.P. force is complete with a ghost car and Officer Woody, a mannequin. Conceived sometime in the early years to deter speeders on Chelsea roads, Woody was initially a plywood cutout in the shape of a person that wore a COP shirt and cap and was placed behind the steering wheel of the ghost car 9701. Later, someone donated a mannequin torso and a wig head that was used for woody.

For the past two years, Doug Thienpont has been an officer with the Chelsea Citizen Observer Patrol (C.O.P).

“I thought it would be a good way for me to give back to the community,” said 72-year-old Thienpont.

After joining the C.O.P., Thienpont designed a new Woody with a full body made of cloth with a skeleton made of PVC water pipe, connectors and a vinyl mask. The new Woody looks nearly real and is an effective tool in deterring speeders. Doug and COP No. 68 volunteer to move Woody twice a week. Thienpont has taken on several responsibilities as a volunteer with COP. He submits the monthly vehicle report, prints all of the awards and certificates, and monitors the COP base station radio from his home. Thienpont was 2019 Rookie of the Year.

Thienpont was born in New York. He has lived in Alabama since age 12. He resides in Chelsea with his family. He has been married to Patricia “Pat” for 10 years. They are the proud parents of five children, and proud grandparents of six grandchildren and five great grandchildren.