One year later: A look back at the last year in the battle against COVID-19 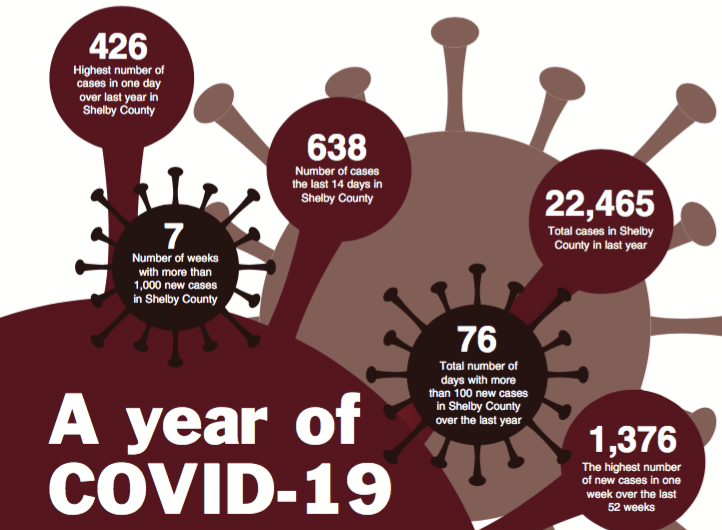 The battle against COVID-19 hit one year on Saturday, March 13 in Alabama. (Graphic by Connor Bucy)

An anniversary we’d like to forget, that was the day Coronavirus broke the barriers of the state line with Alabama’s first confirmed case of the deadly virus. From there, COVID-19 spread like a wildfire despite our best efforts to eradicate from our daily lives.

But as the state hits the one-year mark in the battle against COVID-19 on Saturday, March 13, numbers indicate we are headed in the right direction.

With the numbers the best they have been since June, there is a glimpse of hope, but it doesn’t come without the devastating memories the last year has brought.

But recently, numbers have taken a drastic downturn.

That span also marked daily highs with the county surpassing more than 200 cases in one day for the first time on Dec. 10, followed by a high of 426 new cases on Dec. 14.

The county also had its highest weekly total of cases Jan. 2-8 following Christmas and New Year’s Eve with 1,376 new cases during that seven-day span.

Since then, however, numbers have been on a steady decline across the county.

Following that week, there was only one more week of more than 1,000 cases. Between Jan. 16 and Friday, March 12, there have been less than 1,000 cases and each week has seen a decline other than the week of Feb. 27-March 5.

Three of the last four weeks have featured less than 400 new cases in the county with the most recent week, one year after the start of the virus, featuring the least number of cases in one week since June 20-26. That number is 222 new cases for an average of 31 new cases each day.

Over the last two weeks, there have been a combined 593 new cases with 7,352 people tested, meaning 8.5 percent of those tested have tested positive.

That’s a drastic decrease from the 47.8 percent of those tested testing positive during the first week of 2021.

Over the last month, there has only been one day of more than 100 cases with 101 on March 2, while every day outside of that has seen less than 70 new cases in a day.

Statewide, numbers are also improving from both a new case and hospitalization standpoint.

The average number of new cases per week the last year has been 9,659, but over the last two weeks, there has been a total of 11,699 new cases.

Over the last seven days, there have been less than 1,000 new cases every day, which is a drastic improvement from earlier this year when there was a high of more than 5,000 cases in one day.

Hospitalizations have also decreased since the beginning of the year, going from 2,972 on Jan. 10 down to the current number of 448, which is the best mark since last May.

There have also been a total of 10,274 deaths in the last year, but that number is also dwindling. After a high of 84 deaths on Jan. 10, the number of daily deaths has steadily decreased.

The majority of counties in Alabama, including Shelby County, are now in the low risk category, meaning there has been a downward trajectory for 14 or more days.

A big reason for the improvement in numbers is the arrival of both the Moderna and Pfizer vaccine, while Johnson and Johnson’s vaccine has started being distributed as of the last week.

So far, 1,176,914 doses of the vaccine have been administered across the state with 742,258 receiving the first of two doses and 440,983 receiving both doses. Johnson and Johnson is the only one of the three being administered by the state that doesn’t require two doses.

The decline in number of cases, deaths and hospitalizations along with the continued administering of the vaccine has led Gov. Kay Ivey to announce that she will lift the state’s mask mandate on April 9, which has been in place since July.

That’s another sign that the state is headed in the right, but as the county fights for more vaccine and the threat of another spike sticks around, county and state health officials ask to keep your guard up moving into year two of the battle against COVID-19.