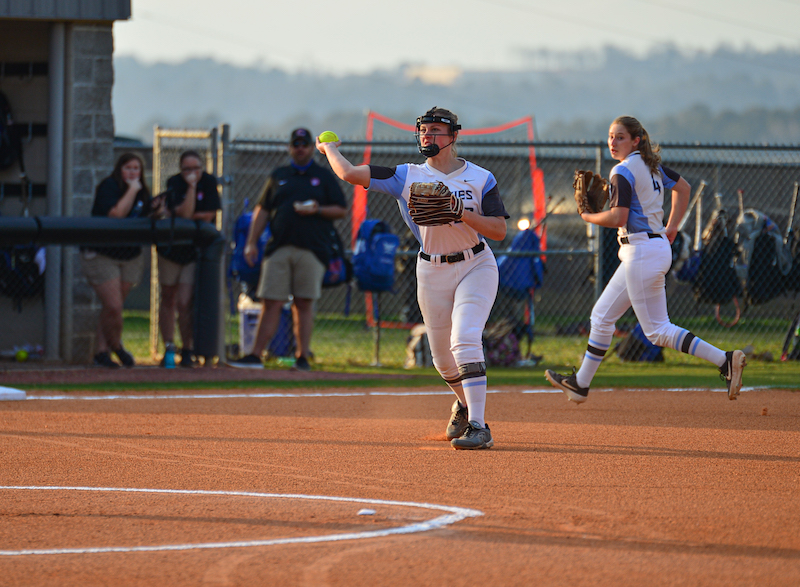 Helena's softball team took down Chilton County on March 11 to remain unbeaten in area play before turning around to beat Hoover and John Carroll over the weekend. (For the Reporter/Jeremy Raines)

HOOVER – The Helena Huskies continued a strong season with an area win against Chilton County on Thursday, March 11, and then two wins at the Hoover Round Robin March 12-13.

The Huskies took down the Tigers 4-2 to improve to 2-0 in area play and then beat Hoover 7-6 and John Carroll 10-6 in the round robin tournament with one 5-1 loss to Vestavia Hills.

Against Chilton County in an important area game, the Huskies were able to take control in the third and fourth innings.

That put Helena in front 4-0, which looked to be a safe lead.

Chilton County, however, battled back with a strong top of the sixth looking to come from behind. The Tigers scored on an RBI single and an RBI double, but Cam Bailey in the circle and the defense behind her eventually got out of the jam without allowing any more damage.

Bailey then came out to strike out the side in the top of the seventh to finish off a 12 strikeout performance. She gave up just five hits and two runs in the win.

Holiday led the way at the plate with two hits and two RBIs, while Ezekiel picked up two hits and one RBI. Wilkins added one hit and one RBI, while Lexie Bullock and Alana Scott each had a hit.

One night later, the Huskies matched up with Hoover in the first game of the Buccaneers’ round robin tournament.

Hoover then came back and tied the game in the top of the sixth, only to be outdone but the Huskies in the bottom half.

With two outs and Elise Dufour on second as a courtesy runner, Scott stepped to the plate and lined a ball to right field. Dufour was able to round third and come home for the game-winning run as Scott picked up a walk-off single for the 7-6 win.

Helena went on to lose 5-1 to Vestavia Hills Saturday morning, but bounced back later that same day with a 10-6 victory against John Carroll.

The Huskies scored eight runs combined between the first and second innings, including seven in the second, to separate themselves.

That made it difficult for the Cavaliers to claw back. They scored two in the third, three in the fifth and one in the sixth, but Helena’s lead was too much to overcome as the Huskies added two more runs to complete the win.

Holiday and Grayson Barnett led the way for the Huskies with two hits and two RBIs apiece, while Ann Marie Stanbridge had two hits and one RBI. Harley Morrison, Alex Erwin and Wilkins each added an RBI.

Despite allowing six hits and five runs, Bailey had 12 more strikeouts in the circle.